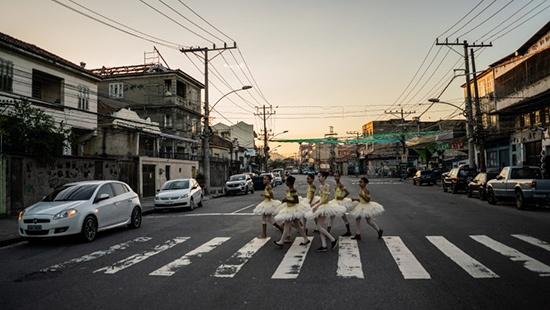 In one of Rio de Janeiro’s most dangerous areas, one woman is using ballet to guide young girls away from a future of poverty and crime. But to keep her dance academy alive, she must constantly bend to the laws of the favela — and contend with drug dealers and hostile politicians alike.

Maysa Barbosa Aben-Athar gets home from school and walks into her bedroom. She passes the bunk bed she shares with her two sisters and sits down in front of the mirror.

She rubs combing cream into her hair, brushes it smooth and knots it into a tight bun. From underneath her bed, she pulls out a golden tutu decorated with feathers. It cost 2,000 Brazilian real (433 euros, $483) — more than Maysa’s mother earns in a month as a cleaner.

“We’re late,” Maysa says as she leaves the small apartment. She heads toward the Rua Leopoldo Bulhoes, known to locals as the “Gaza Strip.” It’s the main street in the Manguinhos favela in Rio de Janeiro, which 11-year-old Maysa has called home all her life.

Garbage piles up along the sides of the Rua Leopoldo Bulhoes. Homeless people sleep in wooden shacks. Others, seemingly on drugs, look confused; they scream or lie in strange positions on the asphalt. “We once had to jump into the mud over there,” Maysa says. It was to avoid being struck by a stray bullet during a shooting. Violence is normal here. The Manguinhos favela is known for its high rate of violent crimes.

Along the way, Maysa meets up with other girls, all between the ages of 10 and 13, who are also wearing tutus. Together, they walk past boys, bullet holes and garbage — and make their way through the favela’s narrow streets to Daiana Ferreira de Oliveira, the woman for whom they brave this trek twice a week.

Manguinhos is actually a conglomeration of several favelas, which grew and spilled over into one another until they became indistinguishable. The streets here all look the same, which is fitting, since residents’ prospects hardly differ from block to block. It starts at Maysa’s age: Boys get into drug dealing, and girls get pregnant from the same guys.

The violence, the hopelessness and the misery in the slums of Rio de Janeiro are all a direct result of the lack of guidance, role models or future prospects — except drug trafficking — for young people. That’s why the 31-year-old Daiana began offering young girls an alternative: a ballet school in the favela.

Tardiness is not tolerated and there’s a strict dress code. It’s all designed to teach the children discipline. “We don’t give the children time to breathe,” Daiana says. “I mean that in a good way.”

In the beginning, she only taught six ballerinas. Today, there are 250 — and 400 on the waiting list. The school has been reported on in the New York Times and an American philanthropist is helping co-finance it. One of her instructors studied at the Bolshoi Theater School in Joinville, Brazil, and the prima ballerina of Brazil’s most renowned ballet is a patron. But all of the attention still doesn’t change the reality on the ground.

Daiana must constantly bow to the rules of the favela, which are imposed by the drug trade. She must often ask members of the drug gangs for permission, shift class times or change routes. Her school aims to pull children out of the drug business — and yet she must constantly work to accommodate it.

This afternoon is no different. Daiana must first ask permission from a local drug boss to walk the streets with the girls in their golden tutus. One never knows what might upset the boss.

The girls are well-known here, as is Daiana. She’s often stopped on the street and asked whether she has room for another girl, someone’s daughter, niece or grandchild. Daiana has known most of the favela’s residents since she was a child herself. She was born here in Manguinhos and comes, as she puts it, from “a typical favela family.” Her father had three wives, Daiana grew up with two sisters and had 15 half-sisters, all of whom were distributed throughout the favela. It’s one of the reasons, she says, she knows every corner of Manguinhos.

Daiana was only seven when she first visited the Teatro Municipal, Brazil’s most renowned ballet, located in the center of Rio. Later, an acquaintance gave her private ballet lessons in her spare time, while Daiana studied sports education and completed a dance training course on the side — all thanks to scholarships awarded to poor Brazilians by the then-left-wing government of Lula da Silva.

Staying Out of Trouble

Daiana also worked as a jazz and ballet instructor for rich families in Rio’s South Zone. She began giving free lessons to children from her own neighborhood in 2012.

Daiana’s mother, a tutor, sent her students to her daughter’s ballet class. Her mother’s main concern was keeping the kids from hanging out in the favelas. Daiana’s school grew, as did her waiting lists. Performances followed, first local ones, then in theaters across the city.

A professional soccer player from FC Botafogo named Jairzinho heard about Daiana’s project in 2014 and paid her a salary for two years so that she could concentrate on the children of Manguinhos.

With his help, Daiana also found a room that was big enough to accommodate her classes, which had grown to 180 students. It was in a library at the Tropical Institute, a state-sponsored building. She also received donations from a wide variety of sources. Her small ballet school, it seemed, was there to stay.

But in 2017, Rio’s new mayor, Marcelo Crivella, an ally of current Brazilian President Jair Bolsonaro, entered office on a pledge to tighten the budget — and he began his fiscal house-cleaning by cutting cultural projects in the favela. Both the library and the ballet school were closed.

A few days later, the children returned with Daiana, a locksmith and a promise from the drug gangs they would leave them alone. They broke the lock and became what was probably the only squatting ballet school in the world. This lasted for more than a year. The government accepted the occupation, probably out of indifference more than anything.

As the Manguinhos ballet school grew in popularity, politicians began to approach Daiana. Shortly before the gubernatorial election in 2018, a request came in from the same mayor who had shuttered the library the year before. He wanted to attend a performance with a candidate for governor. A ballet performance in a favela would provide a grandiose backdrop for his political campaign.

Daiana agreed, though she planned to use that backdrop for her own purposes. She spray painted the girls’ tutus red and smeared the walls with soot. As the politicians and their guests sat in the audience, the girls danced briefly and then fell to the floor. One by one, they played dead. “The Manguinhos ballet is not an advertising project for the right,” Daiana says. “We wanted to show him what the consequences of his politics are for us.” A few days after the performance, the mayor cleared the library and again locked the doors.

What followed were, in Daiana’s words, the worst days of her life. The school and its 250 students were suddenly without a studio. She found the girls space to practice in samba schools, churches and trade union buildings, but these were only temporary solutions. It was during this time that the New York Times visited Daiana. Shortly after the article was published, foreign men began showing up at her rehearsals. They said they wanted to get to know her and the school.

The men turned out to be scouts for an American philanthropist who wishes to remain anonymous. He is a member of The Secular Society, a group of benefactors whose interests include the advancement of women. He wrote to Daiana and asked her to find a building for the school. He said he would buy it and give it to her. He also promised to pay salaries for the teachers, administrators, a psychologist and a cleaner through 2021.

A Life on Life Support

After that, the ballet school moved into a 4-story, former drug rehabilitation center on the edge of the favela. The doors were donated by the local church, the mats came from the bankruptcy estate of a jiu-jitsu school. The laminate was provided for free by a DIY store and the toilet paper is brought by the mothers of the students themselves. “We live on favors,” Daiana says. “A life on life support.”

Up on the third floor, Maysa and the other girls float over the linoleum. The teacher scurries between the rows, straightening the children’s backs or correcting the position of their working legs. Chins up, necks extended.

Maysa, who is normally shy, has been on the school’s select troupe for four years. They’re the elite dancers of the Manguinho ballet. And when she dances, she’s the center of attention. The ballet has provided her with opportunities that are otherwise not normally a part of life here. Recently, she traveled by night bus to the colonial city of Ouro Preto a to perform at a winter festival and then flew to Sao Paulo.

But like anywhere else in the world, the chances of ever earning a living from dancing are slim. One springboard to success, however, is the Teatro Municipal, Brazil’s best ballet school. Two ballerinas from Manguinhos passed the entrance examination last year. Maysa wants to try her luck in four years.

Even if she is accepted, life won’t be easy. “Of the 250 girls, perhaps a dozen will earn their money with ballet. Of these, at most a handful will do so as dancers,” says Claudia Mota, the prima ballerina at the Teatro Municipal and one of Brazil’s most famous dancers.

Just What the Girls Need

Not every girl at the Manguinhos school will one day be a famous dancer, but every last one of them is a success story. “Many of the girls who come from the dance school go on to do other things later in life,” Mota says. “But what remains is the discipline, the strength, the self-confidence and the presence of mind.” These are qualities that, Daiana says, are missing in the favela, especially among young girls.

“Favela culture is poisoned,” Daiana says. Violence, neglect and child labor are the norm. She is constantly dealing with emergencies. Two girls haven’t showed up in weeks. Daiana received a video in which the two of them, just 13 and 14 years old, could be seen doing cocaine with some boys who work as drug dealers.

The next day, Daiana was on her phone half the time because the police had smashed in the door to one of the girl’s homes. They were after the girl’s brother, who is now on the run. The house is a mess.

“We can’t save Rio or Manguinhos,” she says. “All we can do is distance ourselves.” That’s why Daiana takes the children to the Teatro Municipal four times a month. Lessons happen several times a week. There are performances every weekend, plus flea markets and celebrations where the girls are encouraged to help out.

One girl’s mother once told Daiana, “My daughter is hardly ever home anymore.” To which Daiana says she replied, “That’s the point!” When the girls turn 14 or 15, that’s when they’re at the highest risk. Maysa is nearly there.

This is why the school is so strict, Daiana says. It is also why classical ballet — this rigid, tightly regulated, historical dance — is perfect for these girls.