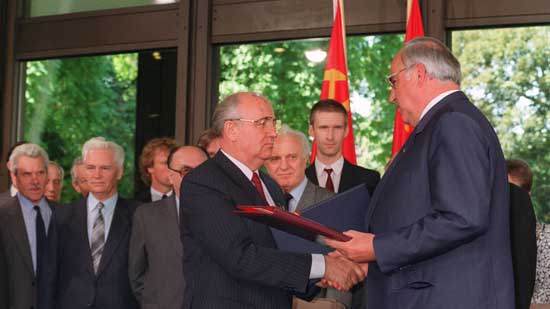 John Laughland, who has a doctorate in philosophy from the University of Oxford and who has taught at universities in Paris and Rome, is a historian and specialist in international affairs.

The German foreign minister’s view of the collapse of communism and the fall of the Berlin Wall owes more to fairy tales than reality, writes John Laughland.

As the 30th anniversary of the fall of the Berlin Wall approaches, it is inevitable that there will be a deluge of sentimentalizing about that great event. German Foreign Minister Heiko Maas has given us a taste of things to come in an editorial published in 26 EU countries, where he thanked “the hundreds of thousands of East Germans who took to the streets to protest for freedom… the Gdansk shipyard workers, the singing revolutionaries in the Baltic countries, the Hungarians who were the first to cut through the Iron Curtain… the pioneers of Charter 77 in Prague, those who took part in the Candle Demonstrations in Bratislava, the revolutionaries of Timișoara”.

“In other words, all the women and men whose desire for freedom swept away walls and barbed wire. And we have our friends and Alliance partners in the West, as well as Gorbachev’s policy of glasnost and perestroika, to thank for this, paving the way to reunification,” he wrote.

As Oscar Wilde said, “the good ended happily, and the bad unhappily. That is what fiction means.” Maas’ fantasy about brave liberals blowing their trumpets to bring the Berlin wall miraculously crashing down shows how the myth of revolution, once the preserve of the Bolshevik regime in Moscow, now holds the Western mind tightly in its sinister grip. This myth causes people to believe in people power, whereas the truth is that state power is what decides history.

Maas’ list is the wrong way around. Gorbachev’s policies should not be at the end, almost an afterthought, but instead at the very beginning. The Soviet leader’s domestic and foreign policy liberalization started the whole process. If Gorbachev had not decided to stop propping up the communist dictatorships in the Eastern bloc, none of the iconic events of 1989 would have happened.

Indeed, in comparison to his monumental decision to abandon the “Brezhnev doctrine,” according to which the Warsaw Pact, under Soviet leadership, had the right to intervene throughout the bloc to “protect socialism,” all those events Maas remembers so fondly – the jangling of keys, the candles, the songs – were mere operetta, nothing but froth on a great tidal wave of history of which they were by no means the cause.

All previous popular uprisings in the Eastern bloc had been put down by force – in 1953 in East Germany, in 1956 in Hungary, in 1968 in Czechoslovakia and in 1980-1981 in Poland. This could have continued indefinitely but Gorbachev decided against it.

In March 1988, on a visit to Belgrade, Gorbachev signed a joint declaration with his Yugoslav counterpart which insisted on the “mutual respect for the independence, sovereignty and equality (of Socialist states) and the impermissibility of interference in internal affairs under and pretext whatever.”

Communist countries were henceforth free to pursue their own policies – and some of them did. In June 1989, semi-free elections were held in Poland and Solidarity formed part of the new government.

In a massively attended speech, delivered on June 16, 1989, on the occasion of the ceremonial reburial of the leader of the 1956 Hungarian revolution, Imre Nagy, a brave young man called Viktor Orban demanded the withdrawal of Soviet troops from Hungary. Such a public declaration of heresy had an electrifying effect across the Eastern bloc – but, in fact, by then, the most momentous decision had already been taken.

Two days earlier, on June 14, 1989, at the end of a highly successful visit to West Germany, Chancellor Helmut Kohl had taken Gorbachev for a walk in the garden of his official residence in Bonn. They went down to the banks of the Rhine. Kohl recalls in his memoirs how he said to Gorbachev: “Look at the river flowing past us. It symbolizes history, it is not static. Technically, it is technically possible to dam it, but the water will break the banks and find other ways to reach the sea. It is the same with German unity.  As surely as the Rhine flows into the sea, German unity will come.” Gorbachev’s response to Kohl’s lyrical remarks was silence – a silence Kohl rightly understood as indicating tacit agreement.

A week later, in a speech at the Council of Europe on July 7, 1989, Gorbachev confirmed in public what he had intimated in private to Kohl.  He spoke of the Cold War in the past tense and committed the USSR to supporting “a common European home,” a concept, he said, which “rules out the probability of an armed clash and the very possibility of the use of force or threat of force – alliance against alliance, inside the alliances, wherever.”

Shortly after the Bonn meeting, on July 19, two of Kohl’s senior advisers published plans for the new Europe, which foresaw the integration of the east European states into new pan-European political structures. There would have been no sense in doing this unless the Federal Chancellery knew that the USSR was prepared to let Eastern Europe go. With their idea of a Europe of “concentric circles” extending deep into what was then still the Eastern bloc, the basic geopolitical outlines of the new Europe were drawn. Two years later, EU states decided to create the euro, the geopolitical function of which was to fill the void created by the collapse of Soviet power, and to keep Eastern and Southern European states orbiting firmly around the “hard core” of France and Germany – or, more precisely, of Germany alone.

To be sure, Gorbachev unleashed forces he could not control and which would eventually engulf him and destroy his country. To that extent, the events of 1989 are textbook cases of revolutions in which established political power suddenly evaporates.

The actual fall of the Berlin Wall on November 9 – months after the Iron Curtain had come down on June 27 when the Hungarian and Austrian foreign ministers physically cut the barbed wire separating their countries – occurred by accident. The East German government spokesman gave a misleading statement to the press about a new visa policy and east Berliners spontaneously amassed at Checkpoint Charlie, wrongly believing they were allowed to cross over to the West. Overwhelmed by the crowds, the guards rang for instructions. The new regime, disoriented and demoralized because the old one had just been hung out to dry by Moscow, simply threw in the towel. The same thing happened in Prague a few days later. But none of it would have happened without Gorbachev.

Today, Russia is the big bogey man – even more so, it often seems, than during the Cold War.  Eastern Europeans today think that Putin threatens their freedom. 2019 would be a good occasion to remember that 30 years ago, the winds of change blew in not from Brussels or Washington but instead, unambiguously, from Moscow.