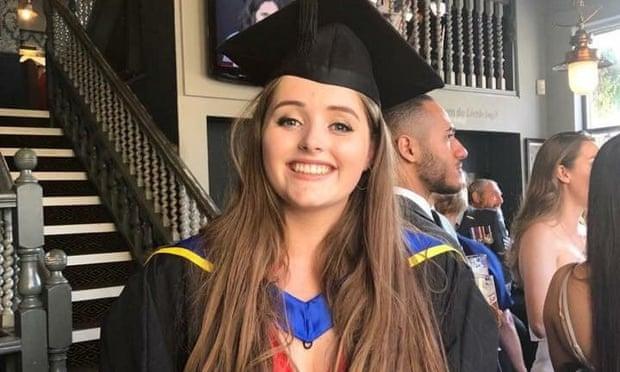 Millane, from Essex, died during Tinder date with alleged killer, jury in Auckland is told

Charlotte Graham-McLay in Auckland – The   Guardian  – Grace Millane’s murder trial in New Zealand has begun, with the jury being told details of her Tinder date with alleged killer. Photograph: Lucie Blackman Trust/PA

British backpacker Grace Millane was strangled to death during a Tinder date, prosecutors have alleged, as the case against the man accused of killing her began in New Zealand.

Millane went missing in Auckland last year and was later found dead, her body crammed inside a suitcase buried in scrubland outside the city.

On Wednesday, the jury of seven men and five women was asked to decide whether Millane was murdered by her date after the pair went to his apartment, or whether the man strangled her by accident during consensual sex.

“Only two people know what happened in that room,” said Robin McCoubrey, who was opening the prosecution case in the Auckland high court. “One of them can’t tell us, and the other hasn’t told the truth about what happened.”

Millane, from Wickford in Essex, died sometime during the night of her 22nd birthday in December. She was on a round-the-world holiday after completing her university degree in England when she arrived in Auckland, New Zealand’s largest city, in November last year.

Her disappearance and news of her death generated a national outpouring of grief, vigils around New Zealand, and a national discussion about violence against women.

The accused man, 27 – whose name is suppressed by the court – faces a murder trial due to last at least four weeks. He has pleaded not guilty to the charge.

Millane’s parents David and Gillian were among those seated in the packed public gallery for the opening of the trial on Wednesday.

The details of her death were disclosed publicly for the first time, when McCoubrey told the jury that the young woman had died from pressure to her neck.

The prosecutor said that this took sustained pressure, applied at close range, and questioned why someone who was part of a consensual sex act gone wrong had not attempted to resuscitate their partner, or called emergency services.

The accused had initially told the police that he and Millane had parted ways after a drink, McCoubrey said. In a later interview, he said they had gone to his apartment for consensual sex, which “turned violent” and she had asked him to strangle her.

He told police he had taken a shower alone after sex with Millane, and had later gone to bed thinking she had left his apartment. He told police he found Millane’s body on the floor when he woke up.

There is no dispute that Millane died in the accused man’s apartment – but what happened inside it will form the question at the heart of the man’s trial. Wearing a navy blue suit, the accused sat impassive in the dock as the case against him was read out, but cried while his defence opened their argument.

One of the accused’s lawyers, Ian Brookie, said the death was an accident that happened “during perfect ordinary casual sexual encounter between a young couple who had met up on Tinder”.

The pair had “got on really well” during their date together earlier in the evening, when they had visited several Auckland bars, Brookie said.

“An act designed to enhance their sexual pleasure went wrong and she died as a result,” said the lawyer. “That act was done with her knowledge, encouragement, and only with the goal of sexual pleasure in mind.”

The prosecutor said the jury should consider the actions of the accused after Millane died. Evidence showed he had searched the Waitakere Ranges and “the hottest fire” online – Millane’s body was eventually found in the ranges on the outskirts of Auckland – watched pornography, and took intimate photos of Millane where she lay on the floor of his bedroom after her death. “To be perfectly clear of this, the Crown’s saying she’s dead at this point,” McCoubrey said.

Later that morning, the prosecution said, he confirmed another Tinder date for later that day, bought cleaning products and a suitcase, and hired a carpet cleaning machine and a rental car.

“He calmly, coldly and methodically was trying to break any link between himself and Miss Millane,” McCoubrey told the court. He added that the accused was “not distressed” by Millane’s death.

The accused’s lawyer said his behaviour was explained by the fact that some people “acted badly” when confronted by difficult situations.

Millane’s body was found buried, and inside a suitcase, on 8 December.

Brookie, the defence lawyer, said the trial would by necessity – because of the sex act at the heart of it – delve into “ordinarily private matters” for both Millane and the accused, including their sex lives.

“An act designed to enhance their sexual pleasure went wrong and she died as a result,” Brookie said. “That act was done with her knowledge, encouragement, and only with the goal of sexual pleasure in mind.”

It was not meant to suggest Millane was to blame, Brookie said, but that her death had not been murder. He added that intoxication of both parties might have played a role.

Forty witnesses are due to be called in the trial. The public gallery was packed with more than 100 people.

CCTV footage from Millane and the accused man’s date, as they visited bars in central Auckland on 1 December last year, will be screened in court on Thursday.