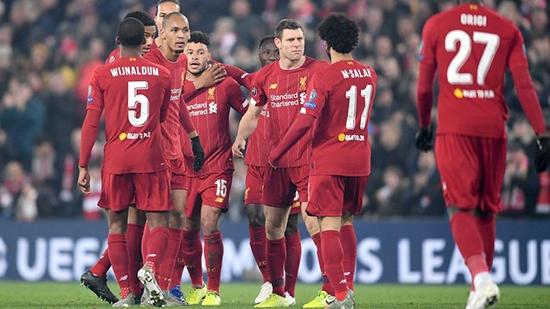 Liverpool did the bare minimum to beat Genk 2-1 with a performance which was played out in the shadow of the looming visit of title rivals Manchester City.

This game was almost an inconvenience, considering what is at stake on Sunday, with Jurgen Klopp’s side looking to extend their six-point lead at the top of the Premier League, and for long periods it seemed the players viewed it as such.

Georginio Wijnaldum’s first goal at Anfield since his double in the 4-0 comeback win over Barcelona in last season’s semi-final second leg should have been the platform for a comfortable win over Belgians.

However, the players took their eyes off the ball, allowing Mbwana Samatta to equalise just before half-time.

Alex Oxlade-Chamberlain’s third goal against this opposition and fourth in four games, as many as in his previous 45 appearances for the club, sent Liverpool top of their Champions League group knowing an Anfield win over Napoli will send them into the knockout phase with a match to spare.

If Klopp’s team selection had an eye on the weekend it appeared the players’ minds were also on it as they played the first half like a training exercise and were punished for it.

Having taken a 14th-minute lead through Wijnaldum’s clever strike, hooking the ball over his shoulder at the near post when James Milner’s cross cannoned off a couple of defenders, they appeared to take their foot off the gas and go through the motions.

Oxlade-Chamberlain, who scored twice in the meeting two weeks ago, was surprisingly given the number nine position vacated by the rested Firmino.

He threatened a couple of times, first shaping to shoot before playing in Naby Keita for a double chance which was kept out by goalkeeper Gaeten Coucke and his defence.

The England midfielder then popped up on the other side and, after looking to drill one in with his right foot, he cut back onto his left, giving Genk time to crowd him out.

But his experiment through the centre lasted only until half-time when Klopp moved Salah to the middle and switched Divock Origi to the right.

Salah had looked most threatening when appearing in the central channel in the first half, his best chance flashing wide of the far post after his first touch from Milner’s cross had taken out the whole of Genk’s defence.

But, with the team playing well below their usual tempo, concentration lapsed and, when Fabinho lost Samatta at a corner, the Tanzanian slipped in between Oxlade-Chamberlain and Milner to head in at the near post.

Klopp’s tactical switch at the interval, after presumably giving the players a few choice words about their lack of intensity, paid off within eight minutes.

Origi’s cross was held up and then laid off by Salah for Oxlade-Chamberlain to fire home left-footed as pace and purpose returned to their game.

It was dialled down again with 10 minutes remaining – even after the introduction of Robertson and Mane – as City began to loom into view, although not for Alisson Becker who had to parry a shot from Bryan Heynen.

But they got through with no alarms, a rarity considering recent games, or – crucially – injuries but the relatively low-key reaction to the victory highlighted that the focus is on Sunday’s top-of-the-table encounter.