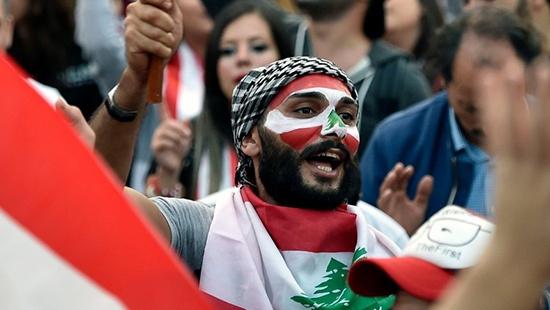 The Arab Spring may have passed over Lebanon and Iraq eight years ago, but now protestors in both countries are taking to the streets to demand changes to the system. The regime in Iran is unlikely to sit idly by.

On some days, the uprising gripping Lebanon and Iraq has the look and feel of a festival. Young people can be seen dancing and celebrating well into the night and it#s all quite decentralized. There is no recognizable leadership and no political flags or signs. The demonstrators organize over social media.

Their demands, however, are nothing short of revolutionary. They are calling for the resignation of their countries’ entire political elite. Images from the protests are reminiscent of the Arab Spring, the series of pro-democracy demonstrations, uprisings and, in some cases, armed rebellions that shook the Middle East eight years ago. That movement, though, passed over Lebanon and Iraq.

Yet the problems that have inspired many young Lebanese and Iraqis to take to the streets are similar to those encountered in Tunisia and Egypt back in late 2010. Demonstrators lament dim economic prospects and point to rampant corruption. But each country’s situation is different. Accordingly, so are the pace and trajectory of developments there. For Iraq in particular, things do not look good.

Many countries in North Africa, the Gulf and the broader Middle East find themselves in a period of upheaval reminiscent of the revolutions that spread across Europe in 1848-49. A new generation is demanding more participation, especially economic, as they come of age and enter the labor market. They are better educated than their predecessors and better connected, yet they have fewer opportunities than their parents and grandparents. These countries’ economies are heavily dependent on the state, and there are simply not enough jobs to go around. Meanwhile, rival regional powers view the uprisings as a threat to the existing order, and thus, their influence. In Iraq and Lebanon, the dominant power is Iran, which sees its interests as being directly imperiled by the uprisings there, just as they were in Syria in 2011.

Ayatollah Khamenei, the most powerful man in Iran, took to Twitter on Oct. 30 to weigh in on the most recent protests. “The people have justifiable demands, but they should know their demands can only be fulfilled within the legal structure and framework of their country. When the legal structure is disrupted in a country, no action can be carried out,” he wrote. The irony of his statement was hardly lost on anyone, since the movement Khamenei himself leads came to power 40 years ago thanks to a revolution. And yet he is seeking to discredit the most recent uprisings by blaming them on “the insecurity and turmoil created in their countries by the U.S., the Zionist regime, some Western countries, and the money of some reactionary countries.” By “some reactionary countries,” he primarily means Saudi Arabia.

For the first time, disruptions are taking place in two Middle Eastern countries with no all-powerful, permanent ruler. On the contrary, Saad Hariri, Lebanon’s recently resigned prime minister, was widely considered to be weak. The same is true for Iraqi Prime Minister Adil Abdul-Mahdi, whose tenure is approaching its end. The protests, however, are not directed at any one person, but at the system itself.

Iraq and Lebanon are kleptocracies and the parliaments in both countries are elected on the basis of religious quotas and factions. The strongest players in Iraq and Lebanon are simultaneously party and militia leaders — and their militias are often more powerful than their countries’ respective national armies. This is also thanks to Iran’s generous support.

The Iranian regime supports the strongest factions in Iraq and Lebanon. Tehran has cleverly and patiently used the complicated constellations in both countries to its advantage in order to solidify considerable influence. Though the protests in Lebanon are directed against the entire political elite, Hezbollah, Iran’s partner, has much to lose. Hezbollah itself may have begun as a revolutionary movement decades ago, but its leadership has by now woven itself tightly into Lebanon’s political fabric. The group’s leader, Hassan Nasrallah, is playing for time. A confrontation between Hezbollah and demonstrators seems unlikely. Lebanon is a small country and years of civil war left deep scars. Furthermore, many of the protesters taking to the street belong to Hezbollah.

In Iraq, on the other hand, more than 250 demonstrators have already been shot and killed — often in the chest and head by snipers. Hundreds more have been arrested. These developments are reminiscent of the bloody repression of the mass protests that took place in Iran in 2009, and the similarity is likely no coincidence. Qassem Soleimani, the head of Iran’s elite Quds Force, has supposedly offered his support to his allies in Baghdad. Parts of the “People’s Mobilization Units,” an umbrella organization of militias, some of which are allied with Tehran, are said to be responsible for the murders.

Iraq is of great importance for Iran. The two countries share a border that stretches for nearly 1,500 kilometers (932 miles). The Iranian regime would do almost anything to protect or expand its hard-earned influence — even at the cost of a new civil war.