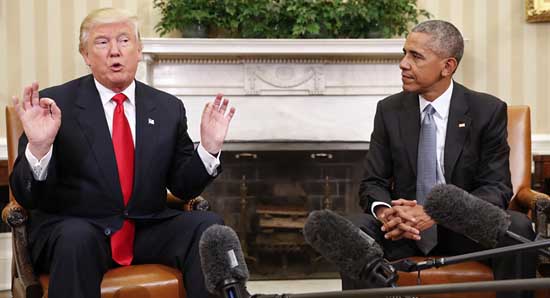 A book entitled “Inside Trump’s White House: The Real Story of His Presidency”, written by pundit Doug Wead, is scheduled to be published on 26 November.

A new book has revealed that unnamed top CIA staffers compared the administrations of US President Donald J. Trump and his predecessor, President Barack Obama, asserting that Obama’s White House “micromanaged” CIA affairs, but was concerned with “political correctness”, according to Fox News.

The book, written by political and religious pundit Doug Wead, stated, citing anonymous sources that were purported to have been assigned inside the White House that CIA staffers revealed their complaints against the Obama administration in a meeting with former CIA director Mike Pompeo.

“They met with the agency’s top five staff members. Someone from the White House asked about the major differences between the Trump administration and that of its predecessor”, the author wrote, according to Fox News.

According to Fox, the Trump administration has a decentralised form of management that allows more freedom for agencies.

“Was there something the Trump folks could be doing better? One answer given was that in the last administration, everything was being run from the White House. The president’s staff was very operationally involved. If the CIA wanted to buy furniture in one of its foreign stations, it might require the White House to sign off on the purchase”, the book read.

“The new Trump theory was to let them make choices. If they’re not making those decisions themselves, then we can always pull it back up. So that was the first thing”, said an unnamed source in the White House quoted in the book.

Wead’s book suggests that the Obama administration wasted a lot of time holding weekly “political correctness” meetings in the White House, but without positive results, according to Fox News.

“They would have a meeting every week, and at the conclusion of the meeting there was always the suggestion, ‘Let’s meet again in two weeks’. Nothing was ever resolved. Nothing was ever good enough”, according to text in the book cited by Fox News.