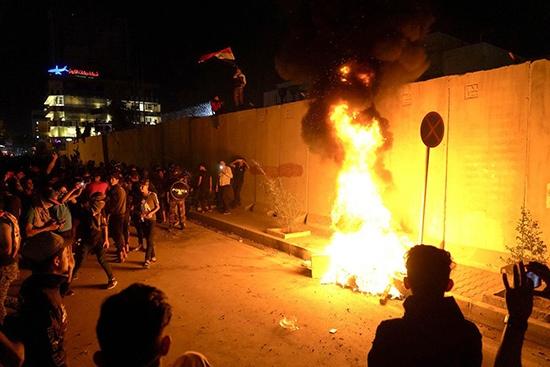 Iraqis tell MEE the attack on Karbala consulate is a sign of increasing anger over Iranian interference.

On Sunday night, Iraqi security forces fired tear gas canisters and live ammunition at hundreds of protesters who were attempting to set fire to the Iranian consulate in the holy city of Karbala.

Witnesses said protesters scaled the walls surrounding the building, bringing down an Iranian flag and replacing it with an Iraqi one.

At least three people were killed and 12 injured, according to the Iraqi parliament’s Human Rights Commission.

On Monday, Iraq’s foreign ministry released a statement condemning the attack and stressing that the security of missions and consulates was a red line that it would not allow to be crossed.

In the early hours of Tuesday morning, the internet was shut down across the country in a bid to curb the protesters and prevent them documenting violations by the security and riot forces against them.

Iraqis have told Middle East Eye the attack was a sign of the increasing anger at Iran’s perceived interference in Iraqi politics – ranging from its influence on politicians to its support for militias in the country.

‘Iran has never helped Iraq to be a strong country’

Hassan Ali, a 35-year-old resident of Karbala, said: “Since 2003 (following the US invasion), Iran has become a part of the Iraqi government’s decision-making process.

“I know Iran is our neighbour and borders Iraq but we do not see anything good that it has to offer Iraq, and it has never helped Iraq to be a strong country.

“Iran has armed Iraqi youths to expand their political wings.

“I do not wish any other Iranian consulate or embassy to be opened anywhere [in Iraq].

Salam Abdulridha, who asked for his real name not to be used over security concerns, witnessed the events in Karbala.

Abdulridha told MEE: “Before the protesters headed towards the Iranian consulate, they were gathering at a square in the centre of Karbala when a religious man professing his loyalty to Iran came and told them not to chant against Iran.

“The protesters were carrying posters with words against Iran written on them, and they were chanting ‘Iran out, out! Karbala remains free.’

“The religious man was so angry to see the protesters shouting against Iran, he asked them to stop chanting, and responded by destroying their posters.

“As a result of his action, the protesters moved to the Iranian consulate and torched it partially and threw stones at it.”

“Personally, I am against torching any consulate or any diplomatic place, but I’m also against Iran attacking Iraq’s sovereignty or killing us with their militants.”

Abdulridha said the death toll of three killed during the attack on the consulate was not accurate and that more than nine people were killed, with tens injured.

‘The people are the source of all power’

Haider Laith, an unemployed resident of the southern city of Basra, said that the torching of the Iranian consulate in Karbala was good news and that it marked the beginning of an uprooting of Iranian influence in Iraq.

“By torching it, there is a message we want to deliver it to the government, that we do not want its [Iran’s] presence in our country anymore, and also to stop their militias’ activities in the country,” he told MEE.

“I feel we achieved a victory over Iran, despite that the Iraqi government was unhappy with what the protesters had done.

“However, the consulate has been stormed by the people, and according to Iraq’s constitution, the people are the source of all power.

“I totally understand that Iraq’s constitution does not allow for torching, but at least it orders us to save our country from any ‘enemy,’ meaning Iran.”

Mohammed Qassim, also from Basra, said: “After the Iraqi Shia cleric Ali al-Sistani issued a statement saying no country has the right to intervene in Iraq’s affairs, that statement motivated the angry protesters in Karbala to head towards the consulate to express their refusal of Iran’s negative role in Iraq.”

“Although the Iranian embassy is a diplomatic area, we did not like such an embassy inside our home.

“We want to live in a country free of any outside influence, and be friends with all countries”

Ghanim Abed, an Iraqi political analyst, told MEE: “It is not the first time that Iraqis have torched Iran’s consulates, two years ago they torched the Iranian consulate in Basra.

“It is a normal response by Iraqis against a country that it considers is the main reason for all Iraq’s problems.

Abed said Tehran had used its influence in the Iraqi government to favour Iranian economic interests at the expense of Iraqi ones.

“Iran has dominated Iraq’s economy and stolen the country’s wealth,” he said.

“It protects the militias, and is behind Iraq’s political and military’s decisions.

“Storming the Iranian consulate represents the Iraqis’ screaming against the deep Iranian interference in Iraq.”