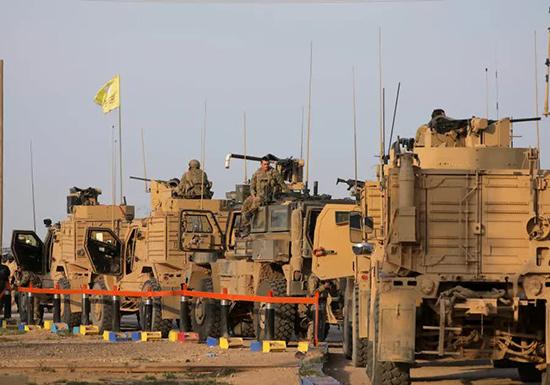 US forces have been patrolling near Rmeilan oil fields in the last several days and the regime forces now appear to overlap with the same areas.

Syrian regime forces swept in to the town of Mulla Abbas and drove next to oil wells and oil facilities, showing the Syrian regime flag and celebrating their reconquest of eastern Syria. A cameraman from Syrian state media SANA was on hand to capture the moment.

Syria says that it sent the Syrian Arab Army units 60km from Qamishli on the border with Turkey to secure a swath of villages and provide security for local people in Al-Hasakah province. “They will conduct their national tasks and create stability,” Syria says.

But the patrols are not next to oil fields the US was seeking to secure. US forces have been patrolling near Rmeilan oil fields in the last several days and the regime forces now appear to overlap with the same areas. According to SANA, the regime now has forces in Deir Ghosn, Ataba, Tal al-Hasanat, Mulla Abbas, Qahtaniya, Kadrim Fawqani, Tel Jahan and Tel Kharnoub. It is part of a larger regime force that also has sent men to Tel Tamr, scene of fighting and clashes with Turkish-backed militants. Some areas were abandoned because of fear of Turkish attacks and “terrorist organizations supported by the Turkish regime,” Syria says. Turkey claims that there are members of the Kurdistan Workers Party (PKK) in some border areas and claims it needs a “safe zone” along the border. Russia and Turkey signed a deal on October 22 that allows Turkey some joint patrols in the area. Turkish-backed far-right Islamist extremist groups have attacked an area near Tel Abyad and forced 200,000, mostly Kurdish, residents to flee since October 9. Turkey has carried out airstrikes. The Syrian regime says it is trying to retake these areas to contribute to stability.

The US-backed Syrian Democratic Forces, which Turkey claims is linked to the PKK, has withdrawn based on the Russia-Turkey deal. A power vacuum has thus resulted. Nature abhors a vacuum so into the vacuum has come the Syrian regime and some US patrols. The US wants the oil, says US President Donald Trump. The US will keep the oil and some profits may be given to the SDF or the US, or be part of a deal with Damascus.

The Syrian regime is very proud of its accomplishment and its soldiers are celebrating. They brought at least three Toyota pick-up troops with white camoflouge designed apparently to blend in with the Syrian landscape, and one truck that looks like it was from the Soviet era. The Syrian soldiers spent time raising their flag and saluting and celebrating. They took photos and sought to man a checkpoint. The oil fields were obviously of interest, because they included several photos of oil derricks. The Syrian regime has spread its forces out toward the city of Derik (Al-Malakiya) at least 90km from Qamishli, although SANA says the forces only drove 60km of the way. They may have been distracted by the oil and not gone all the way to Derik.

US forces patrolling for oil drove down the M4 all the way to Sarrin over the weekend, and then back through Qahtaniya and toward the Rmeilan oil fields on November 3 and 4. The Coalition forces say that artillery shells fell within 1 km of the road they were driving on near Tel Tamr. This means that in a relatively small area there are not Turkish forces, Turkish-backed Syrian rebel groups, the US forces, US-backed Syrian Democratic Forces, Russian patrols and Syrian regime soldiers.

The US says that its troops are positioned in a strategic area to deny ISIS access to the vital resources. “The fundamental purpose of securing those oil fields is to deny those oil fields access to ISIS in order to prevent ISIS from resurgence, US Chairman of the Joint Chiefs General Mark Milley said on October 28 alongside US Secretary of State Mark Esper. The US has sent Bradley armored vehicles to Deir Ezzor near the Euphrates river to secure other oil fields near the Omar field and Conoco gas plant. In February 2018 US and SDF forces clashed with Syrian-backed Russian contractors near Deir Ezzor. Russia’s Sputnik published an article in Arabic about the Syrian regime forces at the Mulla Abbas oil field on November 5.