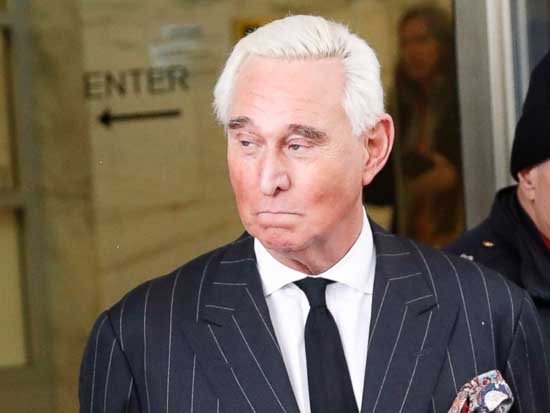 Roger Stone is playing a key role in the Democrats’ attempt to revive the discredited “collusion” story, writes Joe Lauria.

Jury selection began Tuesday in Washington in the trial of political operative Roger Stone on charges of obstructing justice and lying to Congress. But instead of focusing on those narrow charges, the corporate media is trying to make this about Stone’s personality while attempting to revive the discredited allegation of collusion between the Trump campaign and Russia.

The media has a long history of putting personality above facts. Judgement should be reserved to what people say and what they do. Instead we’ve seen character assassination of many people, including imprisoned WikiLeaks publisher Julian Assange, rather than a truthful examination of his actions and the dangerous charges against him for practicing journalism. There is the same obsession with the personalities of Donald Trump and Vladimir Putin, for instance, rather than objectively examining their actions, particularly on foreign policy. In the same way, Barack Obama’s personality was elevated to cover up for his foreign policy disasters in Syria, Libya, Ukraine, and Yemen and in building tensions with Russia.

Now Stone, by all appearances a sleazy operative in a town full of sleazy operatives for both parties, is portrayed by The New York Times as a “swashbuckling and abrasive political trickster for decades” and “eccentric and flamboyant.” Stone is still innocent until proven otherwise. It’s becoming harder to find, but serious reporting about a person on trial would ditch the adjectives.

The reporting on Stone has little to do with the actual charges against him, but rather serves the purpose of reviving a narrative the media falsely pushed for two years: that the Trump campaign colluded with Russia to turn the 2016 election.

“Stone, 67, is at the center of the question of whether the Trump campaign conspired or cooperated with WikiLeaks or Russia to leak stolen emails from the Democratic National Committee and Hillary Clinton’s campaign during the 2016 election.”

“Mr. Mueller’s investigation found insufficient evidence to charge anyone tied to the Trump campaign with criminally conspiring with WikiLeaks or the Russians to damage the campaign of Hillary Clinton. But as documents released last week by the Justice Department underscore, Trump campaign aides were elated when WikiLeaks began publishing emails that the Russians stole from Democrats.”

Of course they were elated as any campaign would be if such damaging, and true, information came out about its opponent. Is elation now a crime?

The Democrats’ and the media’s allegation against Stone, though it is not in his indictment, is that he somehow knew about coming WikiLeaks releases and told Trump about them. Even if he did, is it a crime if he had nothing to do with obtaining the emails? Stone knew about the coming WikiLeaks releases because Assange had already announced they were coming. The Times reported: “Mr. Stone later insisted that he never had any inside information from WikiLeaks, and his claims were simply ‘posture, bluff and hype.’”

The Only Russiagate Crime

Aside from the technical charges against Stone on lying and obstructing justice regarding his alleged efforts to learn what WikiLeaks was preparing to release, the only crime in this whole story is the stealing of the DNC and Podesta emails. It has never been proven in court who did it, and probably never will, despite the Times and other corporate media saying flatly that Russia did it.

Earlier in Stone’s legal process his lawyers filed a motion to try to prove that Russia did not hack the DNC and Podesta emails. The motion revealed that CrowdStrike, the cybersecurity firm hired by the DNC and Clinton campaign, never completed its report, and only gave a redacted draft to the FBI blaming Russia. The FBI was never allowed to examine the DNC server itself.

In the end, though, it doesn’t matter if it were a hack or a leak by an insider. That’s because the emails WikiLeaks released were accurate. When documents check out it is irrelevant who the source is. That’s why WikiLeaks set up an anonymous drop box, copied by big media like The Wall Street Journal and others. Had the emails been counterfeit and disinformation was inserted into a U.S. election by a foreign power that would be sabotage. But that is not what happened.

The attempt to stir up the thoroughly discredited charge of collusion appears to be part of the defense strategy of those whose reputations were thoroughly discredited by maniacally pushing that false charge for more than two years. This includes legions of journalists. But principal among them are intelligence agency officials who laundered this “collusion” disinformation campaign through the mainstream media.

Faced now with a criminal investigation into how the Russiagate conspiracy theory originated intelligence officers and their accomplices in the media and in the Democratic Party are mounting a defense by launching an offensive in the form of impeachment proceedings against Trump that is based on an allegation of conducting routine, corrupt U.S. foreign policy.

Stone may be just a footnote to this historic partisan battle that may scar the nation for a generation. But he has the personality to be the poster boy for the Democrats’ lost cause.