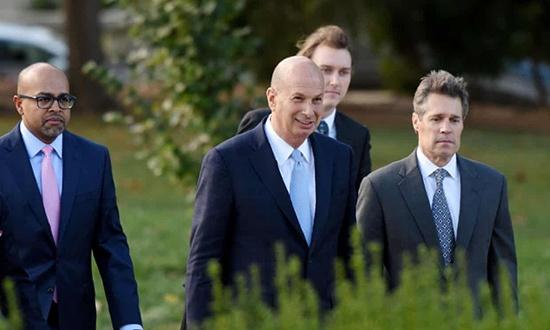 Tom McCarthy in New York and David Smith in Washington

Gordon Sondland arrives at the US Capitol last month to appear before Congress for a closed deposition on the Ukraine scandal. Photograph: Olivier Douliery/AFP via Getty Images

An ally of Donald Trump has changed his impeachment inquiry testimony to confirm that the US president offered Ukraine a quid pro quo to investigate a political rival.

Gordon Sondland, the US ambassador to the European Union, said he had told a senior official in Ukraine that nearly $400m in military aid would probably be withheld until the country announced an investigation into corruption, including allegations concerning a gas company with ties to the former vice-president Joe Biden’s son Hunter.

The dramatic revision to Sondland’s account was revealed in a four-page transcript of sworn testimony made public on Tuesday.

“I now do recall a conversation on September 1, 2019, in Warsaw with” Andriy Yermak, a top adviser to the president, Volodymyr Zelenskiy, Sondland said in his updated evidence. “I said that resumption of the US aid would likely not occur until Ukraine provided the public anticorruption statement that we had been discussing for many weeks.”

The altered testimony raised eyebrows in Washington. Matthew Miller, a former director of the office of public affairs at the justice department, tweeted: “Helluva thing for Sondland to have forgotten in his first appearance.”

Democrats, who have made the quid pro quo offer central to their push for impeachment, seized on the revelations. Chris Murphy, a senator from Connecticut, wrote on Twitter: “Nobody can pretend there’s any lingering debate over what happened. It’s over. Open and shut. Today, the one guy who said there wasn’t a corrupt aid-for-interference deal, changed his story to say that in fact, there was an aid-for-interference deal.”

Sondland, a hotelier and Trump mega-donor, has been placed by other witnesses at multiple key crossroads in the Ukraine affair, including at White House meetings on 10 July in which he pursued Ukrainian officials through the building to press the demand for an investigation of Biden.

He testified for more than 10 hours on 17 October to three House committees running the inquiry, which began releasing transcripts this week.

He originally told investigators he took Trump at his word that there was never a quid pro quo attaching aid or a White House visit to investigations. But as additional witnesses testified and more information became public, Sondland appeared to have a change of heart. The week after his deposition, Sondland returned with lawyers to Capitol Hill to “review” his testimony.

In the updated statement, Sondland said withholding the aid was “ill-advised” and added: “By the beginning of September 2019, and in the absence of any credible explanation for the suspension of aid, I presumed that the aid suspension had become linked to the proposed anti-corruption statement.”

Asked about Trump’s lawyer Rudy Giuliani’s efforts to prompt Ukraine to investigate the Bidens or involve Ukrainians directly or indirectly in Trump’s re-election campaign, Sondland testified that he believed this would be “improper”. When a committee member asked, “And illegal, right?”, Sondland replied: “I’m not a lawyer, but I assume so.”

The House committees also released a transcript of their interview last month with Kurt Volker, the former special envoy to Ukraine. He suggested that, contrary to its claims, the administration was obsessed with getting dirt on an opponent rather than addressing corruption in general. “I believe that Giuliani was interested in Biden,” he said.

Volker condemned the shadow diplomacy of Giuliani, the former mayor of New York and now a central figure in the inquiry. “The negative narrative about Ukraine which Mr Giuliani was furthering was the problem. It was, in my view, impeding our ability to build the relationship the way we should be doing … as I understood it.”

Trump has repeatedly denied that military aid was tied to an investigation of Biden. Asked on Sunday by the Guardian if there was a quid pro quo, the president replied: “No, not at all, not at all.”

On Tuesday, the White House sought to play down the latest disclosures. Stephanie Grisham, the press secretary, said: “Both transcripts released today show there is even less evidence for this illegitimate impeachment sham than previously thought.

“Ambassador Sondland squarely states that he ‘did not know, (and still does not know) when, why or by whom the aid was suspended’. He also said he ‘presumed’ there was a link to the aid – but cannot identify any solid source for that assumption.”

She added: “By contrast, Volker’s testimony confirms there could not have been a quid pro quo because the Ukrainians did not know about the military aid hold at the time. No amount of salacious media-biased headlines, which are clearly designed to influence the narrative, change the fact that the President has done nothing wrong.”

The congressional committees have requested that Mick Mulvaney, the acting White House chief of staff and former director of the budget office, appear for a deposition on Friday.

Mulvaney is the most senior official yet to be approached and the prospect of his appearance on Capitol Hill is likely to escalate a showdown between Congress and the White House, which has tried to stop administration officials from testifying.

Mulvaney did not immediately respond to the request. Previous witnesses have described him as playing a central role in an alleged effort by the Trump administration to manufacture political dirt in Ukraine about the Bidens, in exchange for a White House visit.

Owing to his role in the budget office, Mulvaney could also potentially describe the circumstances for the suspension of the military aid in mid-July.

The rolling release of witness testimony seems designed to deliver a new haymaker to the White House each afternoon.

On Monday, transcripts showed that a top state department deputy resigned because the Trump administration hijacked US diplomacy to “procure negative political information for domestic purposes”.

With televised impeachment hearings anticipated as early as next week, additional releases could strictly curtail moves available to Trump.

In front of the cameras, the president denies all wrongdoing and accuses investigators of corruption. His administration has denied there was ever a quid pro quo. But a White House summary of a call between Trump and Zelenskiy, messages between diplomats, the testimony of a dozen witnesses and public statements by Republicans including Mulvaney belie that denial.

In the background the White House has continued to try to tilt the field of play in the president’s favor.

After the failure of two witnesses to comply with subpoenas on Monday, two more failed to appear on Tuesday. The House intelligence committee chair, Adam Schiff, has said a White House gag order on witnesses amounts to an obstruction of Congress that could be grounds for an additional article of impeachment.

The no-shows on Tuesday included a deputy in the Office of Management of the Budget, the agency that informed the Pentagon and the state department in mid-July that Trump had suspended the military aid.

Mulvaney aside, this week could see the biggest no-show of all. John Bolton, the former national security adviser who attended key meetings and who has been quoted as calling the Ukraine-Biden plot a “drug deal”, is scheduled to appear on Thursday.

The justice department asserted in a letter to Congress first obtained by CNN on Tuesday that testimony taken by the impeachment investigators was “legally invalid” unless a government lawyer accompanied the witnesses.

Schiff dismissed the assertion, noting that personal lawyers had accompanied witnesses and saying the rules for depositions were consistent with “uniform policy practices of the House”.

On Monday, lawyers for Lev Parnas, an associate of Giuliani, said the Ukrainian-born American had changed his mind about speaking with investigators after he saw Trump had denied knowing him.

Trump and Parnas have been photographed together frequently and Giuliani was so close with Parnas, his client, that he took him as a guest to the funeral of president George HW Bush.

“We are willing to comply with the subpoena to the extent that it does not violate any appropriate privilege that Mr Parnas may properly invoke,” a lawyer for Parnas told the New York Times. “Mr Parnas was very upset by President Trump’s plainly false statement that he did not know him.”