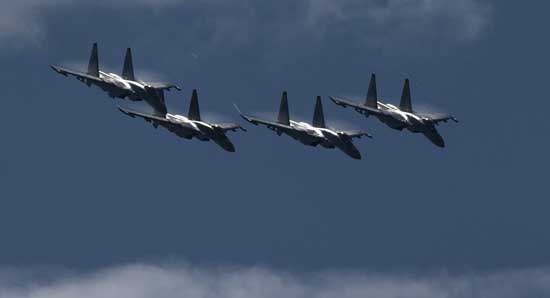 WASHINGTON (Sputnik) – Turkey would purchase Russian Su-35 fighter jets if Ankara decides the aircraft is the best choice for its military despite the possible impact of such a purchase on relations with the United States, according to Turkey’s Presidential Security and Foreign Policies Council member Nurin Atesoglu Guney.

Asked whether there are any concerns a purchase of Su-35 jets may further complicate US-Turkey relations, Guney said, “It can, what can we do?… We have a number of conflicting issues with the United States now. So, this is not that important”.

At the end of October, a source in the Turkish Undersecretariat for Defence Industries said that Ankara and Moscow continue negotiations on the supply of Su-35 fighter jets to Turkey, but a positive outcome is still uncertain.

Guney noted that Turkey was part of the US-led F-35 fighter jet program, but was expelled from it after purchasing Russian S-400 air defense systems.

“We decided to get the S-400s and the Turkish people were fully in support of this decision, that’s for sure”, she said. “The United States is not the only producer, there are other producers present in the market like Russia.

Gunet explained that Turkey’s final decision on a purchase depends on whoever gives Ankara the best choice in terms of technology, co-production, the best price and the like.

“Our final decision will at the end reflects the reality of economic competition existing in the global market. This is a world that we are living in”, Guney said.

Turkey respects Syria’s territorial integrity and intends to pull out its forces from the country as soon as it clears the border area from terrorists, according to Nursin Guney.

“We hope that the territorial integrity of Syria will be achieved”, Guney said. “Turkey does not want to stay there at all. Once it’s cleared from terrorists – we underline this all the time – we will get back home”.

Guney noted that Turkey has already declared it went in northeast Syria solely to clear the area of terrorists and not for other reasons, because “we are very much keen on holding the territorial integrity of Syria”.

However, Turkey reached an agreement with the United States several days later to establish a 120-hour ceasefire.

As the five-day truce came to an end, Turkish leader Recep Tayyip Erdogan and Russian President Vladimir Putin signed a memorandum that would see the Kurdish fighters pull back from the border area. Turkey and Russia have since begun joint patrols in the border area.

Guney also said that Turkey is willing to join efforts to rebuild the war-ravaged Syrian economy and return to an era of regional cooperation.

When asked whether Turkey plans such investments, Guney said, “Of course”.

“Why not? We used to do that before 2011, right before the Arab Spring broke out, which turned to winter then”, Guney noted. “We had very close relations with our neighborhood. What Turkey wants is to help the construction of a peace landmass around itself as much as possible, from the south to the east, and with all neighbors”,

She noted, however, that Ankara’s ability to assist Syria would be limited compared to other neighbors, as Turkey is an “energy dependent country.”

“So, our resources are limited for the time being, but we are willing to cooperate with other international donors that ready to assist re-building of Syria in future”, Guney said.

Last year, Syrian President Bashar Assad estimated that it may take up to $400 billion to reconstruct the country after the conflict. Infrastructure throughout Syria has been destroyed and the country’s transport system needs to be urgently restored. The situation is compounded by the fact that the United States and European Union have imposed sanctions that prevent other countries from helping Syria.

Since 2011, Syria has suffered an armed conflict between various opposition groups, including terrorist organizations, and the government. The Syrian army and other government forces have now regained control over most of the country’s territories and concluded a ceasefire agreement with the opposition.

What’s in a Name?: ‘Adolf Hitler’ Wins Vote in Namibia