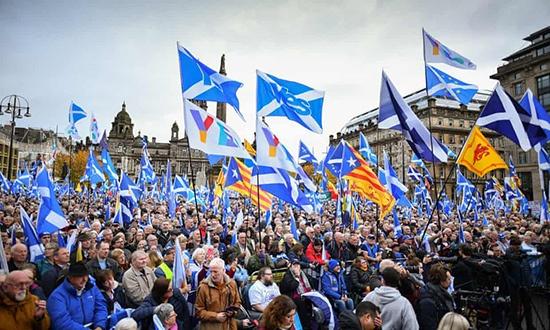 A Tory election victory would cement Brexit grievances, giving heft to the SNP’s case for another referendum

‘The SNP manoeuvred for an election at the moment that the Tories were riding high in the polls.’ Supporters of an independent Scotland in Glasgow last week. Photograph: Jeff J Mitchell/Getty Images

In this election, the smaller parties will play a major role. Just how many voters desert Labour and the Tories for the Liberal Democrats and Brexit party could swing the result in either direction in England.

All we know in advance is that volatility is up – and the consequences of four-party politics are hard to predict. But in Scotland things may be somewhat clearer: the nationalists are riding high, as beneficiaries of nearly four years of Brexit chaos in Westminster and the spike in English nationalism that it represents – all serving to advance the SNP’s cause.

Five years on from the independence referendum, Scottish politics continues to be dominated by constitutional questions. While independence is the lodestar of the SNP project, the Tories refuse to countenance it under any circumstances. Labour opposes independence because it believes it to be bad for working people – but unlike the Tories, the party has little appetite for keeping Scotland in the union against its will. Instead it argues that it would consider a further referendum only if a clear manifesto commitment in the 2021 Scottish parliament elections were followed by a vote in Holyrood in support of the request.

There is a lazy assumption that this position could be circumvented by a hung parliament in Westminster, where the SNP might hold the balance of power. This assumes that Labour would trade an independence referendum in return for support for its broader programme. Yet Labour has argued that it would rather govern as a minority than do such a deal with the SNP. It says that it will put forward its programme for large-scale investment and higher wages and challenge the SNP to explain to Scottish voters why it voted it down. Labour’s offer is as a party of socialism and internationalism. Expect high-stakes brinkmanship on all sides.

Nicola Sturgeon has said she will make a request for an independence referendum in December no matter who is in Downing Street. But it seems rather likely that this is designed to be rejected. SNP strategists are aware that while Brexit turmoil can be co-opted into a casus belli for a further poll, it provides poor terrain for a campaign to win a vote. The past four years have shown how difficult and costly it can be to leave a political and economic union. While current Westminster politics can hardly be described as stable, it is not hard to see how the choice would be framed as stability or chaos. Wiser heads in the SNP realise that Brexit is a double-edged sword when it comes to independence.

This leads on to one of the biggest strategic miscalculations being made in British politics today. Most commentators assume that the SNP wants a Labour-led government in London because, they again assume, it would be more sympathetic to the nationalist cause. But in truth, the best chance for the SNP to get independence is for Johnson to win a majority when Britain goes to the polls next month.

A Tory government would cement the grievance of Brexit, ensure that Brexit continues to dominate Westminster for another decade, pile a hard-right agenda on top, and position independence as the route to real change. And it would provide independence supporters in Scotland with the time to build their case. Only the Tories can make independence the route out of eternal Brexit. This is one of the main reasons why the SNP manoeuvred for an election at the moment that the Tories were riding high in the polls: the SNP is likely to sweep the board in Scotland, while if England generates a Tory majority, this would be the perfect terrain for an independence push.

The real lesson of the 2014 referendum is that those wishing to defend the continued existence of the United Kingdom must recognise that the union must be earned, not taken for granted. And the best way to do that is to build an economy and society across all four nations that people want to belong to. That means a strong economy that raises the living standards of ordinary people, investment in good-quality public services, and an end to the politics of division that have exploded in the past decade.

The simple truth is, Scotland will stay if the union works, and it will leave if it does not. Without real change in Westminster, the union will be in peril. The best route to independence in Scotland is for voters in England to opt for years of Brexit misery and hard-right politics for us all. A vote for Johnson is a vote to leave one union for certain, but also to open the door to leaving another.