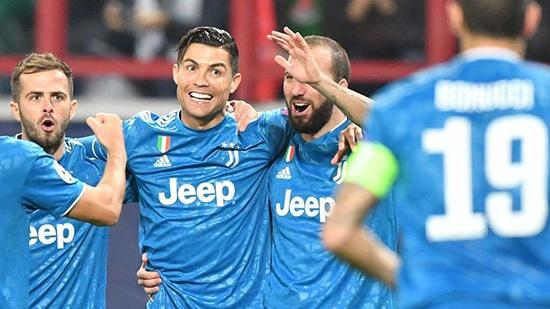 Sporting Life · Columnist
Bayern Munich and Juventus both booked their places in the last 16 of the Champions League with two games to spare on Wednesday night.

Cristiano Ronaldo may well appeal to the dubious goals committee after he saw his free kick fumbled badly by Lokomotiv’s keeper only for Aaron Ramsey to prod the ball home from right on the line.

The Russian side answered almost immediately but as the game looked to be fizzling out to a draw, Douglas Costa produced a wonderful run and one-two before finishing to claim all three points.

The result put the Italian giants through to the next round with two games to spare.

The German champions sacked Niko Kovac on Sunday following a 5-1 defeat at Eintracht Frankfurt, but interim boss Hansi Flick got off to a winning start as his side dominated the Group B encounter.

They had to wait until the 69th minute before the prolific Robert Lewandowski broke the deadlock, before substitute Ivan Perisic ensured victory by adding a second goal in the final minute and the win was enough for Bayern to progress.

It’s the 22nd time in 23 attempts that the Bavarian giants have made the knockout stages of the Champions League.

The 18-year-old former Santos striker scored twice within the opening seven minutes at the Bernabeu Stadium and completed his treble in stoppage time to cap a fine evening’s work.

In addition, he had earlier set up Karim Benzema to score the first of his two goals after skipper Sergio Ramos had converted from the penalty spot.

Benzema’s second was his 50th goal for the club in the competition and helped set up a showdown with Group A leaders Paris St Germain in Spain in three weeks’ time.

The French side will head into the game five points better off than their hosts, but knowing Zinedine Zidane’s men have put a slow start to their European campaign firmly behind them.

Real will test their momentum against Group A leaders Paris St Germain when they head for Madrid later this month defending a perfect record.

They took their tally to a maximum 12 points from four games with a hard-fought 1-0 win over Club Brugge courtesy of Maura Icardi’s 21st-minute effort, although they were indebted to keeper Keylor Navas, who saved Mbaye Diagne’s 76th-minute penalty.

Shakhtar Donetsk emerged with a share of the spoils after a six-goal thriller against Dinamo Zagreb in which both teams were reduced to 10 men.

Shakhtar trailed 3-1 going into stoppage time after Bruno Petkovic had cancelled out Alan Patrick’s opener and substitute Luka Ivanusec and Arijan Ademi had struck following the dismissals of Dinamo’s Nikola Moro and the visitors’ Marlos.

However, Junior Moraes and Tete, who scored in the eighth minute of added time, snatched an unlikely draw.

Bayer Leverkusen secured their first points of the campaign with a fine 2-1 home victory over previously unbeaten Atletico Madrid.

They got their noses in front four minutes before the break courtesy of Atletico midfielder Thomas Partey’s own goal, and skipper Kevin Volland they doubled their advantage before Alvaro Morata pulled one back following Nadiem Amiri’s 84th-minute dismissal.