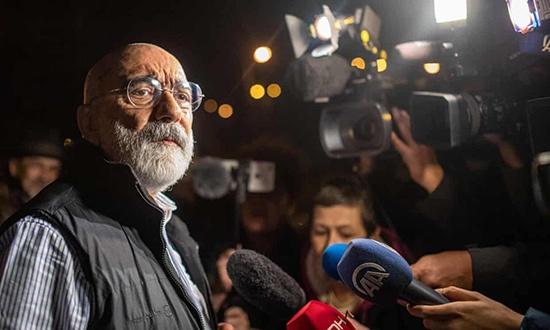 The 69-year-old, whose prison memoir I Will Never See the World Again was longlisted for the Baillie Gifford prize, has been released after retrial

Ahmet Altan speaks to journalists after being released on 5 November. Photograph: Bülent Kılıç/AFP via Getty Images

The jailed Turkish author Ahmet Altan, whose detention was condemned by 38 Nobel laureates, has been released from prison after more than three years behind bars.

The 69-year-old was arrested in 2016 with his brother, the economist and journalist Mehmet Altan, on allegations of spreading “subliminal messages announcing a military coup” on television. Alongside journalist Nazlı Ilıcak, the Altan brothers were charged with attempting to overthrow constitutional order, interfering with the work of the national assembly and the government.

All three received life sentences in 2018, though Mehmet was released after four months, pending his appeal.

Altan and Ilıcak were subsequently retried on terrorism charges, and convicted. However, the court ruled on Monday to immediately release the two writers based on the time they had already served. Mehmet was acquitted due to lack of evidence.

Philippe Sands, president of English PEN and the first foreigner allowed to visit the Altan brothers during their time in prison, tweeted an image of Altan leaving prison.

“A moment of freedom for Ahmet Altan, who gets to see the world again,” wrote Sands, referencing the title of Altan’s prison memoir, I Will Never See the World Again, which was longlisted for the £50,000 Baillie Gifford prize in September. Assembled from notes given to his lawyers, Altan writes in the book of how “never again would I be able to kiss the woman I love, embrace my kids, meet with my friends, walk the streets … I would not be able to watch the sunrise.”

James McConnachie, editor of the Author, who commissioned Altan to write an essay on the eve of his trial, titled The Writer’s Paradox, said: “Authors around the world are delighted that our inspiring colleague is free at last.”

Daniel Gorman, director of English PEN, said that while the organisation warmly welcomed the news that Altan and Ilıcak had been released, it remained “deeply concerned that they and their co-defendants have been convicted on bogus terrorism charges”.

Three of Altan and Ilıcak’s co-defendants – Fevzi Yazıcı, Yakup Şimşek and Şükrü Tuğrul Özşengül – were convicted of membership of a terrorist group and remain in detention. Gorman said English PEN would continue to call for their release “and the many others who remain in detention in Turkey, still the world’s biggest jailer of writers and journalists.”

“While Pen could not be happier that Altan and Ilıcak get to go home to their loved ones – in today’s Turkey this is good news – we mustn’t forget the sham trial and trumped-up charges they and countless other have been subjected to, simply for their critical or dissenting views,” said Sahar Halaimzai, PEN International campaigns and communications manager. “It’s time for the courts to turn their attention to the many others still detained for simply exercising their free expression rights.”