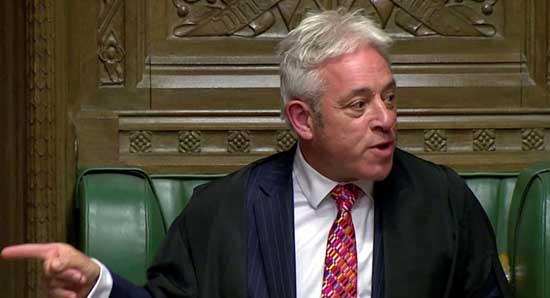 Commenting Parliament, which has been accused of putting the spokes in Brexiteers’ wheels, John Bercow praised Westminster, stressing his commitment to defending its rights, while also championing Johnson’s choice to “do what he did”.

Days after Commons Speaker John Bercow’s resignation, he gave a farewell speech to the Foreign Press Association, dotting the “i”s after previous accusations of bias in favour of anti-Brexit parliamentarians:

“I don’t think it helps the UK. Brexit is the biggest mistake of this country after the war”, the outgoing Speaker stated, expressing though that he has respect for Boris Johnson as the head of the government.

“It’s better to be part of the [EU] power bloc”, he concluded, as cited by journalist Antonello Guerrera of La Repubblica, who attended the event in London.

He, however, rejected the idea he had blocked Brexit, insisting “it was Parliament” that had prevented Britain from leaving before now, “not me”.

Addressing the divisive and at times bad-tempered debates over the UK’s attempts to exit the EU – with the final steps slated for right after the 12 December vote, Bercow argued the Parliament is no disgrace at all and “did its job well” in a jab at Attorney General Geoffrey Cox’s remarks about the “zombie Parliament”.

The comments appeared not to come as a surprise for the public, with many opting to laugh off the ex-Speaker’s largely guessable revelations:

… while some moved to hit back at the claims, retorting:

Bercow, succeeded as Speaker by the Labour MP Lindsay Hoyle from Lancashire, has been accused by Brexiteers of promoting the rights of backbenchers, including MPs Dominic Grieve and Hillary Benn, and allowing to pass the so-called Benn Act requiring the prime minister to ask for a Brexit extension.

The former Speaker is stepping down as an MP after representing Buckingham for the Conservatives since 1997. He has laid out plans to publish a book in the first quarter of 2020 detailing his more than 10-year stint in the Speaker’s chair as well as his life in politics at large.

The other day, Prime Minister Johnson and Labour and opposition leader Jeremy Corbyn agreed to 12 December general elections, ushering in a fierce contest for a majority in Parliament. BoJo’s three attempts to call a snap vote had earlier been rejected by the Commons, while a new Parliament after the 12 December elections is expected to ratify Johnson’s current bill to finalise the country’s departure from the EU.