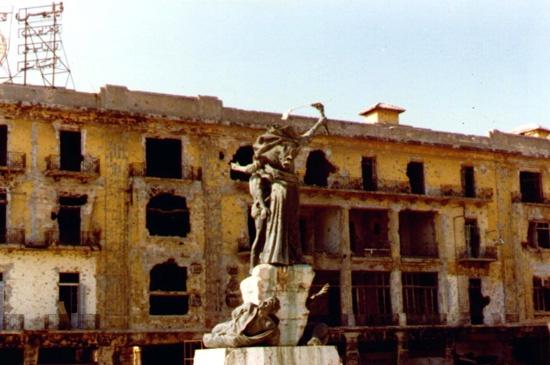 Rafiq Hariri, assassinated in 2005, is more responsible than any other person for the corrupt economic-political system fueling the demonstrations, writes As’ad AbuKhalil.

Lebanon doesn’t go long without a crisis. Since its founding by the French colonial power, the country appears to be on the perpetual verge of civil war.  While civil war doesn’t break out that often, it erupts often enough to cause major death and destruction, and deterioration in the political situation. This current crisis has been in the making since, at least, 1992.

Lebanon’s civil war officially ended in 1990, when the victorious militias (the Shi`ite Amal Movement, the Druze PSP, and the Sunni traditional political class) all interceded with the Syrian regime to help defeat Gen. Michel Awn’s rebellion in East Beirut. (Hizbullah was then on bad terms with the Syrian regime, and the Lebanese forces — Israel’s allies — were all too happy to get rid of their major rival, especially after the gradual retreat of Israel from Beirut from 1982 to 1984).  Lebanon was then put on a track of “reconstruction,” and a new post-war regime was set up by a new, unusual U.S.-Saudi-Syrian alliance.

In 1992, `Umar Karami, an honest prime minister with a reputation of incorruptibility, faced a disturbance. Suddenly, local thugs took to the street and caused public disorder.

It later transpired that it was Syrian intelligence working with Rafiq Hariri, a Lebanese-Saudi billionaire who engineered this street coup against a sitting prime minister. Thus, Syrian intelligence (with Saudi and U.S. support) installed the most corrupt prime minister in the history of Lebanon.  The era of Rafiq Hariri had begun; an era that lasted well after 2005, when he was assassinated in a massive car bombing.

It is not that Lebanon was not corrupt before Rafiq Hariri, but Hariri introduced a scale never known before, as the accounts of Emile Lahhud, in his memoirs and interviews, show.

He put the president of Lebanon, Ilyas Hrawi, on his payroll, as well as most of the members of the political class (he even bought advisers of his political rivals).  Those who were not put on his payroll were his enemies: namely, Emile Lahhud, commander-in-chief of the armed forces (later president); and Hizbullah — and only because they were not seduced by his largesse.

Hariri had accumulated a fortune close to $16 billion at the time of his assassination.  Hariri designed a new system for Lebanon and ran the country jointly with the Syrian intelligence services.  He even bought a segment of the Syrian political elite (but his arrangement came to an end in Syria with the rise of Bashshar Al-Asad, who wanted to install his own men in power, and got rid of his father’s lieutenants — many of whom were on the payroll of Hariri).

Hariri designed the economic reconstruction of Lebanon, implementing an extreme version of the neoliberal recipes of the World Bank and IMF.

He wanted to dismantle the entire public sector: and what he could not sell (due to domestic resistance) he disregarded in funding prioritization, and let them fall into a state of disrepair and ruin. Thus, Lebanese TV, radio, Lebanese University, public transportation, power stations, water resources, trash collection, were left to deteriorate.

He even ignored the need to restore the electric power system in Lebanon (the lack of electric power in Lebanon decades after the end of the civil war is one of the citizenry’s major complaints) because corrupt politicians were beneficiaries from the sale of private home generators.

Furthermore, Hariri forced the restructuring of downtown Beirut. Before the war, this was where Lebanese of different classes and sects met and shopped. The rich had their own suqs while the poor had their own suqs. They were separate and unequal but breathed the same air.

After the war, Hariri forced the confiscation of people’s property (in return for meager compensation) and arranged for the launching of a private company (Solidaire) which would establish a glitzy downtown for the rich elite of Lebanon and the Gulf.   He and his cronies owned most of the shares of Solidaire, which was run by his cronies.

Hariri, contrary to Western media accounts after his assassination in 2005, did not use his money for reconstruction. Instead he mortgaged the wealth of future generations. Lebanon became heavily indebted to private Lebanese banks, in which Hariri and his cronies had major stakes.

Hariri installed Riad Salameh, the manager of his funds at Merrill Lynch, as governor of the central bank. (See volume one of Antoine Sa`d’s biography of Patriarch Nasrallah Boutros Fayr.) Salameh remains the governor and the central bank has been targeted daily by protesters over the last two weeks.

This Salameh has become the object of popular wrath due to his “fiscal engineering” schemes, which enrich the private banks at the expense of ordinary Lebanese.  Hariri also believed that Lebanon could prosper as a service economy (based on tourism — including sex tourism for Gulf royals) and banking. Industry and agriculture were disregarded and he succumbed to U.S. pressures by fighting the cultivation of hashish in the Biqa`, a vital source of income for tens of thousands of families.

Politically, Hariri was given a free hand by the Syrian regime, and he often clashed with Hizbullah.  Hariri promised that the Arab-Israeli peace (“next spring”) would bring wealth to Lebanon, but his dreams were not meant to be.

He lowered taxes on the rich and introduced a value added tax which increased the burden on the lower classes. The income gap between rich and poor increased widely. The rich invested in the real estate market and luxury apartment buildings rose all over Beirut, pushing middle class residents further away from the capital.

But Rafiq Hariri’s neoliberalism also caused a strong negative reaction. Labor unions united in the 1990s and mounted strong opposition and protests.  Hariri quickly turned to Syrian intelligence and cracked down on the unions and demolished their leadership.  He resorted — as usual — to sectarian mobilization and agitation and hired former communists to lead the fight against independent labor unions in Lebanon. The Syrian regime and Hariri appointed close allies as labor ministers (either from the Ba’ath Party or from the SNNP) in order to intimate labor unions.   The scheme worked, and labor unions have since been led by cronies of Nabih Berri (speaker of parliament and leader of the Amal Movement).

Conspiring Against Resistance to Israel

While Hariri was pushing for his economic vision for Lebanon, he also was conspiring against the Lebanese resistance to Israel. His mouthpiece, the newspaper Al-Mustaqbal, led the charge and even blamed it for Israeli aggression against Lebanon.

He tried to buy Emile Lahhud, the commander-in-chief of Lebanon’s armed forces, to make him disarm the resistance but Lahhud was incorruptible and he strongly believed in Lebanese right to self-defense.

Even the Syrian regime — in the person of former Syrian Vice President and High Commissioner to Lebanon `Abdul-Halim Khaddam in particular — tried to disarm the resistance. (People forget that Hizbullah’s relations with the Syrian regime only reached a high point under President Bashshar Al-Asad, as the lieutenants of Hafiz Al-Asad were highly suspicious of Hizbullah and even massacred their members back in 1987, when Syrian troops re-entered Beirut.)

In 1998, Emile Lahhud, as the newly elected president, designated Salim Huss as prime minister of Lebanon. Huss tried to reverse Hariri’s economic policies and fight the massive corruption that he left behind but it was an impossible task.

Hariri had installed a shadow government in all key ministries and still had people who answered to him.  The World Bank (whose head was very close to Hariri and would later serve as his adviser) assisted Hariri by releasing alarming reports about Lebanon’s economy between 1998 and 2000, when Hariri was not the prime minister. (It should be noted that Lahhud’s reforms were rather weak, and he retained the corrupt Elias Al-Murr, his then son-in-law, who was minister of interior and later defense minister.)

In 2000, resorting to an acute sectarian campaign and assisted by people inside the Lebanese security system and Syrian intelligence, Rafiq Hariri became prime minister in a landslide parliamentary election. He emerged more powerful than ever, and his relations with the U.S., France and Saudi Arabia got stronger as his relations with the Syrian regime got weaker under Bashshar.

The Lebanese people are today protesting against the economic-political system for which Rafiq Hariri is more responsible than any other person.

To be sure, corruption prevails throughout the Lebanese state and its institutions, but it was Hariri who made corruption a backbone of the system.  This is a man who not only put key politicians and generals on his payroll, but also hired U.S. officials (former Assistant Secretary of State Richard Murphy), and even a former CNN bureau chief in Beirut.

He enjoyed a great propaganda apparatus which blamed his enemies for his own crimes against the Lebanese people.  His son Sa`d, while lacking the business acumen and political skills of his father, continues to serve as the obedient servant of the Saudi-American alliance in his role of the leader of the Hariri family. (Succession in the Hariri family after Rafiq Hariri’s assassination was handled by the Saudi royal family. Then Prince Salman picked Sa`d as successor instead of his eldest brother, Baha`. )

The Lebanese people started their protests against the entire ruling class. These include militia leaders Walid Jumblat, leader of the Progressive Socialist Party, formerly a client of the Syrian regime and since 2005 a client of Saudi Arabia and the U.S.; and Samir Ja`ja`, leader of the Lebanese Forces party, which started as an Israeli surrogate militia responsible for the worst war crimes of the civil war and is now aligned with the Saudi regime.

Displays of lavish lifestyle by members of the ruling class — who celebrate million-dollar weddings in the south of France and flaunt their private jets, yachts and mansions (in Lebanon and abroad) — have recently deepened the anger of people living paycheck-to-paycheck.

The resentment of the populace was so wide that for a while it suppressed the sectarian divisions that has long plagued the Lebanese people (and the rulers often stoked those tensions in order to suppress class resentment and mobilization across sects).

It is not clear how the protests will develop but the U.S. and Israel will certainly try to exploit them to their own ends.

Western media focused their coverage on Hizbullah and its leader Hassan Nasrallah, even though his party is less tainted by corruption.

But Hizbullah can’t be spared criticisms either, particularly as Nasrallah (who fears chaos and sectarian clashes) posed in recent days as the defender of the ruling regime, and his alliance with Nabih Berri, speaker of parliament, in particular undermined his claims of fighting corruption in the new parliament.

The U.S. may want to worsen the economic crisis in Lebanon in the hope of increasing opposition to Hizbullah. But with the bulk of the ruling class being loyal clients of the U.S, and Saudi Arabia, the U.S. is not likely to undermine a regime that serves its interests.

So perhaps the U.S. wants to shake the country but not bring it to ruin.  Of course, the Lebanese people can defeat all external conspiracies targeting Lebanon, but that requires unity and revolutionary zeal.

The infiltration by the mass base of traditional political bosses loyal to the Saudi regime into the demonstrations (especially the bases of Jumblat and Ja`ja`) may have been intended as a way to divert the protests in a direction favorable to the U.S.-Israel-Saudi alliance.  It is up to the protesters to stay vigilant and exclude from their ranks those whose only wish is to protect the ruling class and its interests.