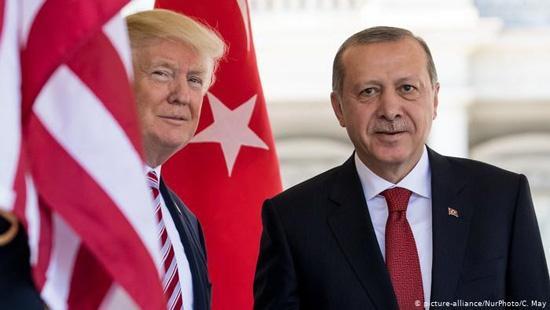 US President Donald Trump said he had a “very good call” with his Turkish counterpart. But relations between the NATO allies have nose-dived over differences on Syria, Russian military hardware and the Armenian genocide.

The office of Turkish President Recep Tayyip Erdogan late Wednesday said he would continue with a planned trip to the US next week after a phone call with his American counterpart, Donald Trump.

Both leaders “reconfirmed that they will meet in Washington on Wednesday, 13 November, on President Trump’s invitation,” said a statement from Erdogan’s office.

“He informed me that they have captured numerous ISIS fighters that were reported to have escaped during the conflict — including a wifeand sister of terrorist killer al-Baghdadi,” Trump said in a tweet, referring to the “Islamic State” militant group by an alternative acronym.

Erdogan’s visit to the US comes amid heightened tensions between the NATO allies following Turkey’s incursion into northern Syria targeted at uprooting Kurds from the area and Congress’s decision to recognize the Armenian genocide committed by Ottoman forces a century ago.

Turkey has also been suspended from the F-35 US fighter jet program after it acquired Russia’s S-400 missile defense system despite a number of US warnings.

Trump said both leaders had discussed “the eradication of terrorism, the ending of hostilities with the Kurds and many other topics.” The US president has previously threatened to “devastate Turkey economically” if they attacked Kurdish allies in Syria.