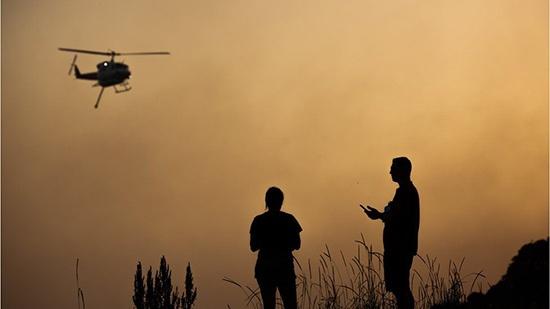 More than 90 blazes were raging across the state on Friday.

The fires – many in drought-affected areas – were being exacerbated by gusty winds and up to 35C heat.

“We are in uncharted territory,” said Rural Fire Service Commissioner Shane Fitzsimmons, adding that 15 blazes were at the highest threat level.

“We have never seen this many fires concurrently at emergency warning level.”

Emergency warnings were also issued on Friday for bushfires burning in Queensland and Western Australia.

In NSW, the worst-hit state, crews have fought hundreds of fires since September. Last month, two people died while trying to protect their home.

Last week, one blaze burnt though 2,000 hectares of bush which contained a koala sanctuary. Hundreds of the animals were feared to have died.

The state is in the grip of a long-running drought and authorities warn that many fires will continue to burn unless there is rain.

“We just cannot overstate the profound impact that the drought is having on fire behaviour,” Mr Fitzsimmons said.

Officials said spot fires – caused by embers travelling in the wind – were breaking out up to 12km (7.4 miles) from fire fronts. This was three times further than average, they added.

Accessing water in dry areas to fight the fires was also proving challenging, with water-bombing aircraft often being forced to fly long distances.

In some cases bores were being drilled to keep up with demand, authorities said.

“We’ve very mindful of the scarcity of water and how precious it is but the reality is we can’t do firefighting without water,” Mr Fitzsimmons said.

Last week, Sydney was blanketed by smoke for days due to fires in Port Macquarie – a region 380km away.

The poor air quality prompted health warnings for those with asthma and other respiratory problems.

Authorities said they were concerned about the severity of the fires ahead of its hottest months, a year after the nation experienced its warmest summer on record.

Australia’s fire season risks growing longer and more intense due to climate change, according to scientists.