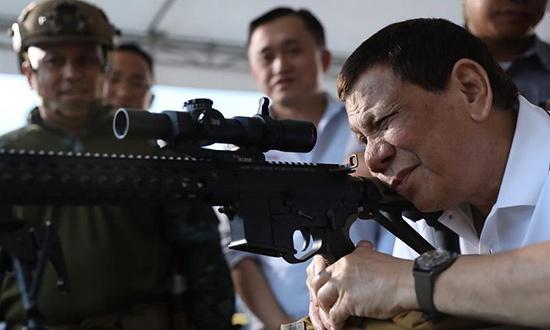 Philippine President Rodrigo Duterte has appointed an opposition leader as his new “drug czar”, a surprise move that may or may not mollify rising criticism of his controversial “war on drugs” campaign.

Vice President Leni Robredo accepted the position – a role many of her supporters view as a poisoned chalice – a day after Duterte issued an executive order to formalize what many initially perceived as a theatrical political dare.

Duterte welcomed Robredo’s appointment as a “good” development because it will allow her to “see the realities on the ground” faced by law enforcement agents, according to Presidential Spokesman Salvador Panelo.

Robredo has been a vocal critic of a campaign that has resulted in the deaths of thousands of drug suspects since it was first launched in mid-2016. Rights groups claim the related death toll could be higher than 20,000 killed, claims the government has hotly denied.

Duterte has consistently maintained his government does not tolerate state-sponsored extrajudicial killings and that police have only fired in self defense, a claim rights groups and media reports have belied.

Robredo, a likely presidential candidate in 2022, accepted the position despite the open misgivings of her political allies who see the invitation as a political trap to deflect attention away from Duterte’s drug war-related abuses.

“Only two and a half years are left in your administration. It’s not too late, we can still work together on this,” Robredo said on November 6 following her surprising acceptance of the somewhat obscure inter-agency committee on anti-illegal drugs post.

Whether Robredo’s appointment represents a rapprochement between the country’s two highest ranking politicians is still not clear. Her key allies have openly warned about the risks of the position, which could make her legally liable for future drug war-related abuses.

Edcel Lagman, an opposition Liberal Party stalwart, warned that “[t]he diluted position validates the fear that the vice president is being set up to fail, since she has to share decision-making processes with Duterte’s henchmen.”

Robredo has said her appointment will not prevent her from criticizing the drug war, while at the same time demanding sufficient powers to overhaul the controversial campaign.

The role, some suggest, could also give her access to drug war-related information that she could have discretion over whether to share with local or foreign investigators.

The United Nations and International Criminal Court have expressed their concerns about possible crimes against humanity in the campaign but have so far been barred by Duterte from conducting on-the-ground investigations.

Robredo’s appointment also comes amid mounting corruption and abuse scandals in the Philippine National Police (PNP) related to its conduct in the drug war.

Ex-PNP chief Oscar Albayalde, a staunch Duterte ally, resigned under a cloud last month over explosive allegations he covered up for so-called “ninja cops” who were recycling confiscated illegal drugs for personal gain.

Duterte has relied primarily on police forces to implement his scorched-earth drug war over the past three years. The upshot has been unprecedented street-level carnage, with many of the brutal killings attributed to supposed pro-government vigilantes.

According to PNP data, the first two years of Duterte’s presidency saw an average of 33 homicides per day nationwide, or nearly 1,000 per month.

From July 1, 2016 – the date when the populist president officially took power on a winning anti-crime campaign – until mid-2018, police recorded 23,327 homicides cases were under investigation, with a large number of those related to the drug war.

Despite the spike in murders, the drug war has remained broadly popular among Filipinos, many of whom believe that the streets are now safer because of Duterte’s decisive, take-no-prisoners approach.

At the same time, 90% of respondents indicated that they would prefer that drug suspects are captured alive rather than killed in extrajudicial fashion in the campaign.

If Robredo is perceived as softening or over-politicizing the campaign, her popularity and presidential ambitions could take a hit, some analysts suggest.

While categorically denying the accusation, Albayalde opted to go on non-duty status (a de facto resignation) on October 14, only three weeks before his mandatory retirement on November 8. Duterte, according to news reports, supported his move.

Senate committees headed by Duterte allies have recommended to file criminal charges against Albayalde and 13 other officers allegedly involved in cover ups during an anti-drug operation in Pampanga, a province close to Manila.

Lieutenant General Archie Gamboa has taken over as the PNP’s officer-in-charge until a new police chief is appointed, which is expected by early next year,

Though a transitional leader, Gamboa has been given special powers to overhaul the PNP’s leadership, an apparent top-level recognition that the corruption allegations against Albayalde may represent the tip of an iceberg.

So far the revamp has fired 20 police generals, including officials in charge of the PNP’s Directorate for Intelligence, Criminal and Investigation Detection Group and Highway Patrol Group, an appointed new leaders Gamboa has said have “fresh ideas” and “new vigor.”

Gamboa also placed all top officials on a three-month probation and ordered a temporary freeze on promotions.

The new police leadership has also mulled the creation of a new “super body” tasked to “oversee and undertake” Duterte’s anti-drug operations, including a softer approach of rehabilitating identified drug addicts.

Still, it’s not clear whether Robredo’s surprise appointment and other changes are merely cosmetic moves to assuage public anger and restore confidence in police, or the front edge of a genuine reform drive.

What is certain is that Duterte blindly relied on a tainted organization to implement a highly controversial campaign that critics say gave carte blanche to an unmitigated killing spree.

And while certain top police officers are finally being called to account, few expect their presidential commander-in-chief to face any legal or other repercussions while still in elected office.