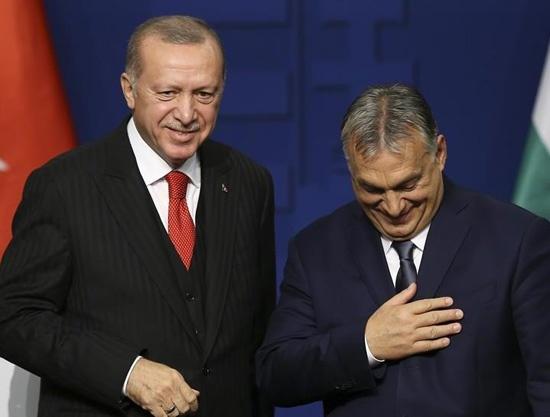 Turkish President Recep Tayyip Erdoğan criticized on Nov. 7 the European Union for its attitude toward Turkey, calling it “far from constructive”.

“Recently, the EU’s attitude toward our country is far from constructive,” Erdoğan said at a news conference in Budapest, Hungary‘s capital, alongside Hungarian Prime Minister Viktor Orban.

“With this attitude, the union essentially damages its own interests,” the Turkish president said, adding the EU needs to understand Turkey’s full membership will contribute to the bloc.

Erdoğan said bilateral problems of some EU member countries with Turkey should not hinder the relations between Turkey and the EU.

His remarks came after co-chairing the 4th meeting of the Turkey-Hungary High Level Strategic Cooperation Council with Orban.

The president reiterated that Turkey hosts 4 million refugees and “significant number” of them are “likely to migrate, especially to Europe.”

Erdoğan said Turkey will continue hosting Syrian people “whether or not support comes” from the EU.

However, he said, “if it gets out of hand, we are to open the [border] gates.”

Orban, for his part, said it is not possible to stop migration flow to Europe without Turkey.

He said Turkey should be supported in its efforts for the return of refugees to their homeland.

“It is highly important to help those people who had to leave their countries return home,” Hungarian premier stressed.

Orban also said Hungary will do its part in reconstruction projects to be carried out in planned safe zone in northern Syria.

Erdoğan said Hungary’s solidarity with Turkey in its fight against terror groups shows that the two countries are strategic partners.

However, he said, some of Turkey’s strategic partners have ties with terrorist organizations. “This makes us really sad.”

Erdoğan said there is no any other country that adopts a strong stance against ISIL.

He said over 3,000 ISIL terrorists were neutralized in the Syrian town of al-Bab alone.

“Currently there are at least 1,149 Daesh members in our prisons,” he added.

Turning to Turkey’s capture this week of the widow and sister of ISIL leader Abu Bakr al-Baghdadi, Erdoğan said Ankara also captured 13 people close to him.

Baghdadi, who was born in Iraq, blew himself up during an Oct. 26 raid by U.S. forces in Idlib, Syria.

Since Turkey recognized Daesh/ISIS as a terrorist group in 2013, it has been attacked by ISIL terrorists numerous times, including in 10 suicide bombings, seven bombings, and four armed attacks that killed 315 people, including police officers and soldiers, and injured hundreds.

In response to these attacks, Turkey launched anti-terror operations at home and abroad, neutralizing 3,500 ISIL terrorists and arresting 5,500.

Erdoğan’s planned visit to US

During his visit to the U.S. on Nov. 13, he will discuss bilateral relations and regional issues with his U.S. counterpart Donald Trump, Erdoğan said.

“S-400, Patriot and F-35 are the topics that will be discussed during
the talks,” he added.

The president said if the circumstances are suitable, Turkey can purchase the Patriot missile system from the U.S.

In July, the U.S. suspended Turkey’s involvement in a program for F-35 fighter jets, saying its purchase of the Russian S-400 missile defense program could endanger the aircraft, a claim Turkey has consistently denied.

Turkey produces some parts of the F-35 jets and is a partner in the jet program. It has warned any effort to remove it from the production chain would be very costly.