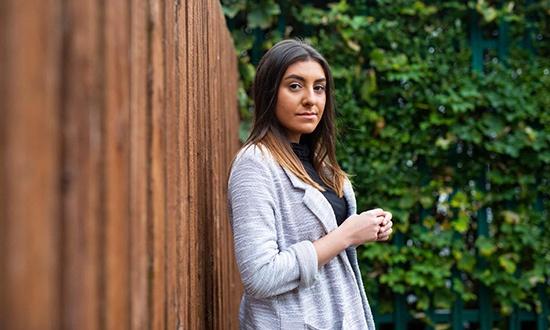 She was a baby when her mother, aunt and grandmother died. But only now, nearly 20 years on, has Lowe discovered the terrible reality about her parents’ relationship

Tasnim Lowe: ‘I wanted to know everything … but certain things I can’t get over.’ Photograph: Fabio De Paola/The Guardian

Tasnim Lowe was 16 months old when she was found under the apple tree where her father had left her, wrapped in a blanket. Behind her, the house in Telford, Shropshire, where her mother, aunt and grandparents lived was on fire and would soon be totally gutted. Her 16-year-old mother, Lucy, who was pregnant again, her 17-year-old aunt, Sarah, and their mother, Linda, were killed; Lowe’s grandfather, George, managed to escape.

The following year, 2001, Lowe’s father, Azhar Ali Mehmood, was convicted of three charges of murder and one of attempted murder. Eighteen years on, he is seeking parole, with a hearing likely to take place in the next couple of weeks.

The case – and Lowe’s attempts to understand why her father committed such a crime – is now the subject of three powerful BBC Three films. Made over more than a year, the series follows Lowe as she uncovers the horrific truth about her parents’ “relationship”.

We meet at her flat in Telford. Lowe is small and slight and looks younger than 20. But when she speaks, she is so articulate and independent that she seems older. There is a tiny hint of a burn scar just above her cheekbone. Doing the documentary, she says, “did take a toll on my mental health because [I had] to take in so much information, and process it … Now I can look back on what I learned and understand it better.” She smiles. “But at the time it was terrible.”

Last year, Lowe was contacted by the Mirror journalist Geraldine McKelvie, who was investigating child sexual exploitation (CSE) rings operating in Telford at the time Lowe’s family were killed. Lowe’s mother’s case seemed to fit the pattern – she was 13 when she met Mehmood, a taxi driver nearly 10 years older than her, and 14 when she became pregnant. Chillingly, other girls in Telford had told McKelvie that, at the time, Lucy’s murder was used as a threat against speaking out. This was all new to Lowe.

That story led to this BBC documentary. Making it, she says, “was good, because I wanted to know everything I possibly could about the case. But at times, there were things that I couldn’t …” She pauses. “Certain things I still can’t get over.”

She means details about the relationship between her parents. Miraculously, during the filming, the police handed back Lucy’s diaries – Lowe had not known they existed. In them, Lucy had written about going to a place notoriously used by grooming rings and performing sex acts on older men.

Yet there was also some comfort in the new information. Lowe was raised by her grandfather (although she also lived with other family members and was in foster care for a few years as a teenager). This was a man who had lost his wife and both daughters, who suddenly had a baby to look after. “My granddad tried his best,” she says and “growing up with him was really good, but I didn’t really understand why he was always unhappy. If you met him, you can tell that he’s had a lot of hurt in his life. So it was interesting learning about what type of person he was [before], with his family, being so bubbly and happy. I feel like it’s brought me and him closer.”

Lowe was too young to remember anything of her mum. All she had while she was growing up were a few photos, a bit burnt and crumbling. There was just one of the mother and daughter together. She doesn’t remember ever being told what had happened, but she grew up with some knowledge of the facts – that her father had killed her mother, aunt and grandmother. “All I remember was that my mum was in heaven and my dad was far away. And that my dad wasn’t a nice person.”

She knew people had said that her parents’ relationship “was a bit iffy” but she never gave their age gap much thought. “But obviously as I’ve got to understand CSE [child sexual exploitation] better, I’ve understood that there is a big difference. I was told a completely different story – I was taught that they were in a relationship and they were not.”

How did that feel? “We still don’t know everything that went on,” she says. “What we do know is pretty terrible, so it’s been hard.” She talks in the film about the pain of knowing she was conceived within an abusive relationship: “I have a bad feeling towards myself … and it’s really not nice thinking of yourself like that.”

There is a powerful moment in the film when Lowe challenges her grandfather about why he didn’t try to do more to stop Lucy seeing Mehmood. She is torn, she says. “I get really angry about it,” but “I don’t want him to feel any worse than he already does. I didn’t want to seem like the bad person, but at the same time I really needed him to realise what he did wrong. To acknowledge it. I think he has.”

Does she still feel angry? “No,” she says. In 2000, people didn’t really understand CSE or grooming, she says. And he was far from the only one whose lack of action seems astonishing in hindsight. “It wasn’t right with how Linda was or how the police were, or social services or Lucy’s school or anyone. I think he’s learned and the rest of society have learned and hopefully now we can improve on how we tackle it.”

Lucy, she says, was failed in the way that thousands of girls who were victims of child-grooming gangs were with such catastrophic results. “People knew what was happening, but they just didn’t care enough or they just pass the blame on. So it’s upsetting, not just the fact that I’ve lost my mum, and my granddad’s lost his daughters and his wife and the whole life that he used to have, it’s also upsetting because this is just one case out of thousands.” Unsurprisingly, she says: “I had a lot of distrust in systems and authorities because of this.”

At secondary school, people started to find out what had happened to Lowe’s family, forcing her to confront other people’s vehement reactions to her personal tragedy. She did have close friends who were supportive, but “pretty much all my friends have a set view on my dad or my mum, so there’s a lot of strong opinions.” These days, she says with a small laugh, when people ask about her family: “I’m just like ‘Google me.’”

Growing up, she had some contact with Mehmood’s family. “There was a time in my life where I wanted to understand that side of my family, my culture and my dad’s religion and things.” When she met them, they rarely talked about Mehmood, and never about his crime. “They’d tell me things about the Qur’an and about my grandparents, my aunties and uncles and my cousins, and my distant family members that were in Pakistan.”

Astonishingly, when Lowe was 16, she went to visit her father in prison – the first time she had any contact with him. Why did she want to meet him? “Curiosity,” she says. “I wanted to form [my own] opinions, to do with the situation but also separate from that. Because, I could have …” She pauses and says it is not likely to happen at the moment, “but I could have had a relationship with him, if I got to know him as a person. So that’s why I wanted to meet him – to see if we could move past it.”

Did she get what she wanted? “Not really. You know when politicians answer questions, they don’t really answer it – it was like that.” I find it difficult to comprehend how she could consider building a relationship, but unless you are the child born into an abusive relationship it must be impossible to understand the complexity. “I’ll always be a bit confused. Because, like, biologically I’m supposed to feel a certain way, so it’s quite difficult … And the fact that I don’t have my mum with me, so I’ve only got him and my granddad, essentially.”

She says she grew up feeling angry at her father, then adds “but not really angry. I know what my dad did was wrong and terrible. But for a person to do that type of thing – the sex abuse, the murder, all of that – there’s got to be a reason why he’s doing that. But for other people around at the time that could see all these things happening before the arson attack, they really could have done something a lot sooner.”

Early last year, Lowe’s family found out that Mehmood would be eligible for parole. “My family would not like him to get parole. But if he does, they don’t want him to be in Telford. And they’ve also requested for him to … it’s kind of like a restraining order. If he contacts me or my granddad or certain family members, then he will go back into prison.” Is that how she feels? “I think it’s best that he doesn’t contact my granddad and family members,” she says, ambiguously.

How does she feel about the possibility of him being released? She believes they should review his case and look into whether he should be charged with sex-related crimes. In the documentary, a superintendent from West Mercia police says this is unlikely to happen. Lowe would like her mother’s case to be part of the ongoing inquiry into CSE in Telford. Lucy hasn’t had justice, she says. “I think ultimately to have justice, you need to be accountable for all the crimes committed. But if that does not happen and he gets released, I don’t know.” She pauses. “I’m not going to wish bad on anyone. Do you know what I mean?”

Not really, I say. I think that’s incredibly generous. I don’t know how she’s come through relatively – to my eyes – unscathed. “I’ve had loads of counselling,” she says with a smile. She has become a resilient woman with a life – she is a support worker for adults with learning disabilities – friends, a boyfriend, beyond all of this.

When Lowe was finally given Lucy’s diaries – which neither she nor her grandfather had known about – she found a letter her mother had written to her as a baby. “I love you so much,” she wrote. It must have been overwhelming to read that. “Yeah,” says Lowe, quietly. “Reading the diaries is like her being here.”

Why Dad Killed Mum: My Family’s Secret will be available on BBC Three on iPlayer at 10am on 13 November and BBC1 at 10.45pm the same day