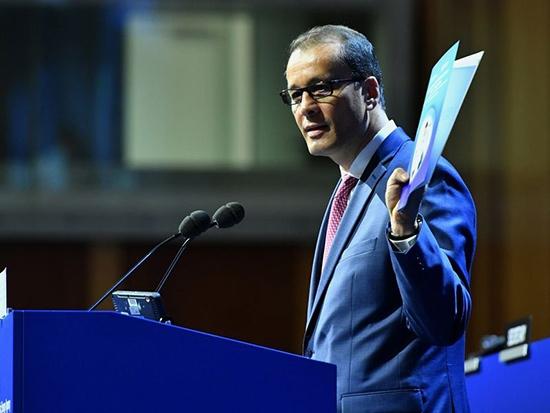 Iran accused an international atomic monitor of setting off explosives detectors at its main enrichment plant, ratcheting up tensions that threaten to tip the nation into a new nuclear crisis.

The International Atomic Energy Agency inspector triggered alarms during routine screening on Oct. 28 at Iran’s Natanz enrichment facility, Ambassador Gharib Abadi said at a briefing in Vienna. The IAEA recalled the inspector after she was questioned by Iranian authorities over traces of explosives detected in her handbag.

The IAEA refuted the charge. “The agency does not agree with Iran’s characterization of the situation involving the inspector, who was carrying out official safeguards duties,” it said in an email. Iran shouldn’t have delayed her departure, the agency said.

The Iranian allegation was made shortly after IAEA officials said Iran had failed to cooperate with its probe into radioactive samples discovered at a site identified by Israel.

“There were suspicious materials involved in this incident,” Abadi said. “Iran expects the necessary level of cooperation during the investigation.” U.S. ambassador to the IAEA, Jackie Wolcott, called the detention of the monitor for questioning an “outrageous and unwarranted act of intimidation,” according to a statement.

The agency’s top inspector, Massimo Aparo, had told diplomats in a closed-door meeting in Vienna on Wednesday that Iran is evading attempts to discover the source of man-made and natural uranium particles detected at a warehouse in Tehran earlier this year, according to two officials familiar with the briefing who asked not to be identified.

IAEA acting director General Cornel Feruta convened an extraordinary meeting of the 35-member board of governors Thursday to discuss the new concerns. The Romanian diplomat said only last month that Iran had taken “a step in the right direction” in attempting to clarify matters troubling inspectors.

“Iran should provide full and timely cooperation,” the IAEA said in an emailed statement. “The IAEA is ready to continue interactions with Iran with a view to resolving the matter as soon as possible.”

The findings threaten to open a new front in the tense confrontation that has erupted over Iran’s nuclear program since the U.S. withdrew from the multi-power nuclear deal with Tehran last year and reimposed punishing economic sanctions. Iran, which has vowed to return to the nuclear deal once the U.S. does the same, this week announced it would begin enriching uranium at Fordow, a fortified site built into the side of a mountain.

European signatories say they remain committed to the nuclear accord but have struggled to devise a mechanism that wouldn’t expose European companies to penalties if they trade with the Islamic Republic.

Secretary of State Mike Pompeo on Thursday urged the world to address what he called Iran’s nuclear “extortion.”

The IAEA has satellite images showing that the Turquz-Abad site where the particles were found was cleared out after Israeli Prime Minister Benjamin Netanyahu presented documents that Mossad spies smuggled out of a secret warehouse in Tehran. Those files allegedly show Iran lied about a weapons project that operated until 2003, and then intensified efforts to hide its atomic archive after agreeing to the 2015 nuclear accord. Iran denies its nuclear program is aimed at producing weapons.

The U.S. is expected to press European allies that remain committed to the pact to support authorizing IAEA inspectors to broaden their investigation, according to the diplomats. That effort would be led by Argentina’s Rafael Grossi, who’ll replace Feruta as director general next month.

The suggestion that Iran could be providing incomplete information has potentially serious consequences. The entire international apparatus of rules that the IAEA enforces is based on verifying the correctness and completeness of nations’ declared nuclear material and nuclear-related activities.

The IAEA’s board referred Iran to the United Nations Security Council in 2006 for failing to fulfill safeguards obligations. The council then imposed crippling international sanctions that were only lifted after the 2015 agreement was agreed.

(Updates with IAEA comment in the second and third paragraphs.)