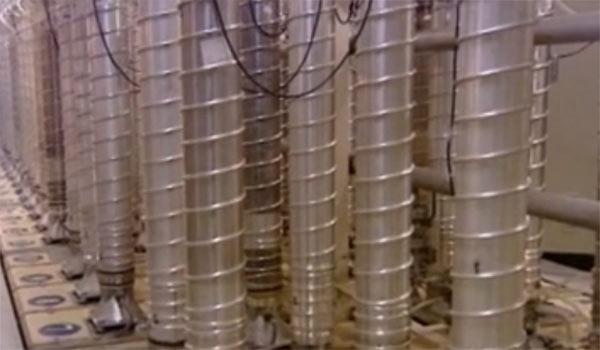 TEHRAN (FNA)- Iran has launched a new generation of advanced centrifuges to roll back its nuclear deal commitments, including injecting gas into IR-6 centrifuges through a ceremony at Natanz Nuclear Facility.

The country can now produce enriched uranium 10 times as fast as the first-generation IR-1s allowed under the nuclear deal it signed with world powers in 2015, also known as the Joint Comprehensive Plan of Action (JCPOA).

The decision came a day after Iran’s Leader Ayatollah Seyyed Ali Khamenei said talks with the US government will not bear any results, because the Americans are not ready to offer any concessions. It also came after the US used the 40th anniversary of the US embassy takeover by Iranian students to sanction key officials reporting to Ayatollah Khamenei, including his son, and called on Tehran to release Americans believed to be held in the country.

Last July, Iran’s stockpiles of enriched low-grade uranium exceeded the 300-kilogram limit set in the nuclear deal. President Hassan Rouhani confirmed later in September that the nation was using advanced models of centrifuges to enrich uranium. This translates into the fact that adding more centrifuges will continue, designed to meet Iran’s enriched uranium demands and force the EU to encourage the US to return to the historic accord. For those of you who remember, President Donald Trump put the future of JCPOA in jeopardy when he unilaterally withdrew the US from the deal in 2018 and imposed unilateral sanctions on Iran.

The decision to deploy advanced centrifuges is designed to make sure all EU signatories to the deal (the UK, France, and Germany) will help Iran to see the economic benefits of the deal as well.

The irony is that the EU, which has voiced discontent over the US exit from the deal, has already created a mechanism, known as INSTEX, that will allow European countries to trade with Iran despite US sanctions. The new mechanism coordinates import and export payments so that cash between partners need not be handled by banks. The first transactions are yet to be processed in an attempt to keep Iran in the deal.

Though the US has complained the deal did nothing to curb Iran’s nuclear capabilities, Europeans say it is working, a fact that the International Atomic Energy Agency has repeatedly confirmed in its reports. Willingly or not, Iran shouldn’t leave diplomacy with the EU in the dust, but it should also not forego its rights under the JCPOA.

This is important, because Russia and China – also signatories to the deal – have been trying to ease the weight of illegal sanctions on Iran. They know that sooner or later Iran will take more measures, and to stop this from happening, Iran needs to see the deal’s economic merits.

For this to happen, the deal, which has been ratified by the United Nations Security Council, should be fully implemented, sanctions should be lifted, and the US should return to the accord. Of course, there should be no preconditions, including Washington’s “maximum pressure” policy.

In summation, tensions wrought by US sanctions against Iran have divided US allies in Europe that were already financially struggling before being hit with the economic penalties’ knock-on effects. The EU countries are urging the US to lift its sanctions against Iran, because the approach is an utter failure.

Sanctions against Iran and other countries are an outright failure that are harming Western economic and geopolitical interests. There can be no question about it. The effectiveness of Washington’s sanctions is very much in doubt, just as the way it has been fighting a series of unending wars across significant parts of the planet.

Sanctions and military threats have failed to dissuade Iran to change course. The country won’t put its hands up and surrender. They haven’t stopped Iran from supporting its allies in the region. They haven’t dislodged Iran’s officials or forced a rollback of its nuclear and missile programs. This should tell you what you need to know about what passes for Iranian foreign policy in 2019.