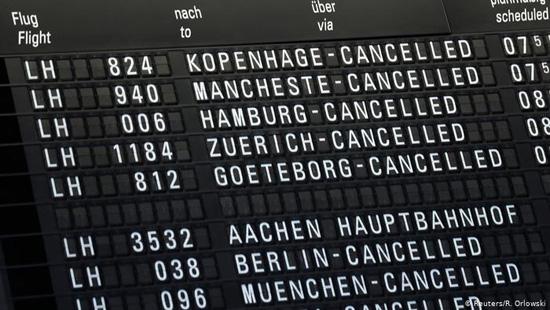 If a solution is not found in the coming days, expect more strikes in the near future, trade union UFO has vowed. The last regular strike on the core Lufthansa brand lasted a week, the longest in the company’s history.

About 600 flights were cancelled on Friday as a 48-hour Lufthansa cabin crew strike entered its second day.

Germany’s flagship airline cancelled the flights, from a total pool of 1362 flights, departing mainly from the Munich and Frankfurt hubs, affecting 180,000 passengers.

The UFO union, which represents about 21,000 Lufthansa crews, called the strike in a dispute over pay and the union’s legal status.

The strike is due to end on Friday, however carry-on effects will likely ground flights on Saturday too.

The strike continued after the German airline’s chief executive, Carsten Spohr, and UFO agreed to a new round of arbitration at the weekend to discuss for a new round of talks in the dispute over pay and conditions.

UFO spokesman Nicoley Baublies said the union was open to discussions but not to ending  the two-day strike.

“If the talks don’t work out, we will have to announce on Monday that there will be more strikes,” Baublies told reporters at Munich airport.

Nicoley Baublies, from UFO, speaks at a rally in front of the terminal at Munich Airport.

The strike action is aimed at obtaining higher expenses and allowances for approximately 21,000 flight crew, as well as improved career possibilities among seasonal workers.

The union, though, will not extend the strike to other airlines in the Lufthansa group such as Eurowings, Swiss, Austrian or Brussels Airlines.

In some relief for the company, Lufthansa’s share price took off on Thursday largely thanks to a cost-cutting program already underway at its budget airline Eurowings.