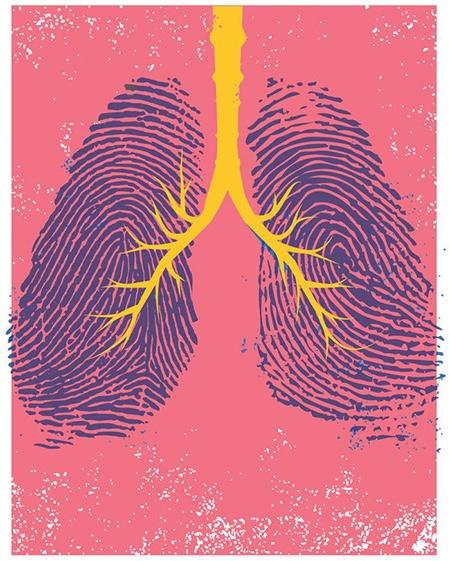 Gina Hollenbeck said she did “everything right.”

The Tennessee nurse and mother of two avoided cigarettes all her life. She ate organic food. She ran half marathons and played competitive tennis. But in 2015, she developed a persistent cough and rapidly lost weight. She didn’t have a primary-care doctor, so she consulted several specialists. For months, none could identify what was wrong. Finally, she paid out of pocket for chest X-rays and took them to an emergency room, where she was referred to a pulmonologist who diagnosed her with advanced lung cancer.

“I was like, ‘This is a cruel joke,’” says Hollenbeck, who is now 42 and still not in remission. “Everybody kept saying, ‘There’s no way that you could possibly have lung cancer.’” Hollenbeck represents a worrying caveat to what is otherwise a great success for the U.S. medical system. Overall lung-cancer rates have fallen significantly in recent decades–but women, who have traditionally smoked less than men and thus developed and died from lung cancer less often, now account for a disproportionately high number of diagnoses.

Lung cancer is the deadliest form of cancer in the U.S. But mortality rates have been falling for decades, driven by medical advances and historic decreases in cigarette smoking. The benefits, however, have not been shared equally. What was historically a men’s disease is now disproportionately affecting women. A 2018 study in the New England Journal of Medicine showed that rates of lung-cancer incidence actually rose over the past 20 years among women born around either 1950 or 1960; in younger women, diagnoses fell, but not as much as among men.

Perhaps more puzzling, Dr. Ahmedin Jemal, co-author of the study, says smoking habits cannot totally explain the demographic shift in lung cancer. But for a few historical blips, U.S. smoking rates have been higher among men than women, continuing to the present day, Jemal says. As of 2017, almost 16% of adult men smoked, compared with about 12% of women, according to federal data. What’s more, though nonsmokers account for about 15% of all lung-cancer diagnoses, 24% of the U.S. women diagnosed in 2016 were nonsmokers like Hollenbeck. That means other factors are contributing to the troubling trend. “It’s completely unknown right now,” says Alice Berger, who researches genetics and cancer at Seattle’s Fred Hutchinson Cancer Research Center.

Scientists are beginning to zero in on some clues. Research shows that the type of lung cancer most common among nonsmokers disproportionately affects women, and young women are more likely to have a gene mutation often found in the tumors of nonsmokers. (A silver lining, Berger says, is that the mutation responds well to newer targeted cancer therapies.) Quirks of female sex hormones or women’s immune systems could be responsible, Berger says. But research is ongoing, so for now those ideas remain theories.

Other hypotheses focus on how cigarettes affect women who do smoke. Jemal says something about female biology could make women more susceptible than men to genetic mutations caused by carcinogens in cigarettes. If so, a higher percentage of women who pick up the habit could develop cancer, relative to men. But that, too, remains a theory requiring deeper investigation.

Without firm answers about the risks women face, doctors, patients and advocates are spreading the word about lung cancer among women and nonsmokers. About 1,400 people have joined a Facebook support group Hollenbeck helped start, and she’s working to push through a federal bill that would further research into women and lung cancer. “Our society believes that lung cancer is a smoking disease,” she says. But for young women like Hollenbeck, that’s increasingly untrue. She hopes her story teaches women that lung cancer doesn’t discriminate and that they shouldn’t hesitate to get help. “If you feel like something might be wrong,” she says, “always go with that intuition.”

Protesters march again in U.S. cities despite curfews; Trump vow to crack down

From Sydney to Paris, world outrage grows at Floyd’s death