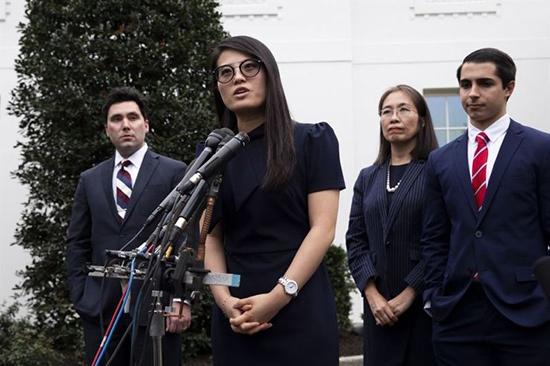 The  Korean Times – A North Korean defector met with U.S. President Donald Trump at the White House on Thursday as part of a group of “victims of communism.”

Grace Jo was among five participants in the event that commemorated the National Day for the Victims of Communism. The event was closed to the press.

According to a pool report, the participants later spoke to reporters, with Jo describing Trump as “very nice” and therefore having too kind an opinion of North Korean leader Kim Jong-un.

Trump has often boasted of his personal relationship with the North Korean leader, with whom he has had three meetings in an effort to get the regime to give up its nuclear weapons program.

The U.S. president has recently spoken little of the human rights situation in the North, where the regime is known to severely repress its people.

In February 2018, however, before the nuclear diplomacy got fully under way, Trump invited a group of North Korean defectors to the White House to listen to the abuses they endured before escaping the regime.

North Korea bristles at all accusations of human rights abuses, viewing them as a U.S.-led attempt to topple its regime.

Trump also invited one of the defectors, Ji Seong-ho, to his State of the Union address last year to highlight the regime’s abuses.

Kim “doesn’t deserve all those compliments” from Trump, Jo told reporters, according to the AFP. She added that she believes the U.S. president has praised Kim for political reasons. (Yonhap)