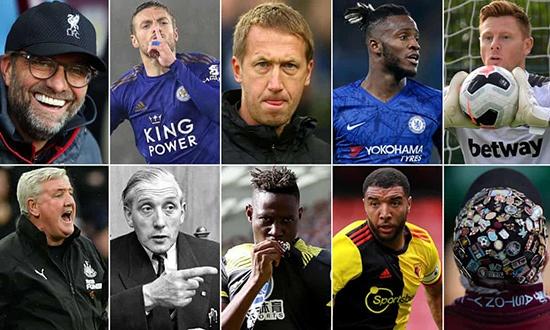 1) Liverpool’s inability to lose could be decisive

Apparently there is a game going on in Liverpool on Sunday. Liverpool’s 2-1 win over Genk in midweek was very much a continuation of a theme – since mid-September they have also beaten Chelsea, Leicester, Tottenham and Aston Villa by the same scoreline, and they last won a league game by more than one goal at home to Newcastle on 14 September. In their last six league games they have a goal difference of only five, yet they have somehow converted that into a mathematically maximal 16 points. The day Liverpool beat Newcastle was also when Manchester City lost at Norwich, but since then the champions have thumped Watford 8-0, put three past Everton and Aston Villa and with the damaging exception of last month’s home defeat to Wolves looked gloriously untroubled. In their own past six games City have accumulated a goal difference of 14, but won only 15 points. Liverpool have often looked of late like a side desperate to lose but somehow unable to, and another demonstration of that kind of resilience on Sunday would give them a very significant advantage in the title chase. SB

2) Norwich and Watford to find finishing touches at last?

So far this season Watford have been winless and fairly hopeless, with Quique Sánchez Flores’s arrival making them much harder to score against, but also much less likely to score. But it’s not just their players’ form that has fallen apart, it is their actual physical bodies: their best striker, Troy Deeney, has not played since August; their record signing, Ismaïla Sarr, has started one league game; Danny Welbeck has a serious hamstring injury and they have been forced into a first-half substitution in each of their past four games. Perhaps this is one slump from which they can now start to emerge, with Deeney – who made his Watford debut in a televised Friday evening league game against Norwich – aiming to return to their squad for this game. Though both teams are in dismal goalscoring form, there has been only one goalless draw between them in 35 games at Carrow Road, with the last 10 encounters featuring a bumper 39 goals and six Norwich wins to Watford’s four. SB

It will be an experience that some never forget. Losing 9-0 at home will do that to you. Craig Forrest, the Ipswich goalkeeper who conceded nine to Manchester United in 1995, said only last week his own experience was still “crushing”. For the Southampton players that featured two weeks ago against Leicester, returning to that dressing room – the scene of the autopsy where they most likely contemplated their careers as well as defeat – will in itself be a mental hurdle to overcome. There will be similar emotions in the stands, as Southampton fans tentatively feel their way back to their seat. The truth is that in the two games since the Leicester drubbing – two unfortunately-timed league and cup visits to the Etihad – Saints have done themselves relatively proud, showing at least a bit of heart. That alone will not save them from relegation, but Moussa Djenepo might. The striker’s injury has meant he missed nearly two months of football (including Leicester) but the £14m summer signing looks a real handful if his wonderstrike against Sheffield United is anything to go by. How Southampton could do with some of that magic against Everton on their return home. MB

A game between a team that doesn’t have Michy Batshuayi but could really use him, and one that does have Michy Batshuayi but doesn’t really use him: his six league appearances for Chelsea this season have lasted, on average, seven minutes and 40 seconds each (he has been credited with a total of 23 passes). The Belgian scored five goals in nine starts while on loan at Selhurst Park in the second half of last season, and having secured that deal, in Roy Hodgson’s words, by “putting a lot of money in Chelsea’s pocket” they are widely predicted to attempt to repeat the trick in January. “The lads are doing their best but we aren’t perhaps as blessed as some teams with a plethora of goalscorers,” Hodgson said this week of his current squad. “With the players we have to work with, I don’t think scoring lots of goals is necessarily something we are going to be able to boast that we’ve done too often.” SB

There is no club that Jamie Vardy enjoys playing more than Arsenal. In eight league starts against them he has scored eight goals, including three braces. When he was approached by the Gunners in the summer of 2016 and decided to remain at Leicester, he described the process of making up his mind as “just coming up with the positives and negatives” – and perhaps being unable, after signing for Arsenal, to play against them would have gone in the second column. He also said, explaining that decision, that “I’m a bit of a psychic – I could see the little downfall they are on now”. Perhaps Unai Emery could ask him when it might end, with many predicting that he might lose his job if Arsenal lose this fixture for a third successive season. SB

6) Pellegrini should take a chance on Martin in goal

West Ham have not won a match since Lukasz Fabianski sustained an injury at Bournemouth in September, with many fans directing their ire towards his replacement, Roberto. The Spaniard, who was brought to the club in the summer by Mario Husillos, the under-fire director of football, was at fault for two of Newcastle’s goals last week, with his positioning for Federico Fernández’s looping header laughable, while he has also looked below par against Everton, Sheffield United and in a 4-0 defeat at Oxford United. With the promising youngster Nathan Trott unable to be recalled from AFC Wimbledon until January, and Fabianski also out until the new year, Manuel Pellegrini is stuck with Roberto or David Martin, son of the club legend Alvin, who signed from Millwall in the summer. With a tough trip to Burnley this weekend, Pellegrini should look at dropping Roberto for Martin, who with more than 300 Football League appearances is surely a better bet to deal with the inevitable aerial bombardment at Turf Moor. MB

7) A lesson from history via the Arthur Rowe era

Seventy years ago this weekend (the precise anniversary falls on Tuesday) Sheffield United, then 10th in the Second Division, travelled to a Tottenham team that were five points clear at the top. What followed was a remorseless skewering: Guernsey-born Len Duquemin, the Channel Islands’ first great footballer, scored in the fifth minute and the 29th, Les Medley in the 24th and 34th, and Sonny Walters got a second-half hat-trick as Spurs won 7-0. Tottenham, in their first season under Arthur Rowe, were developing the “push and run” style that would bring them the Second Division title that season and win them the First Division a year later, but the defeat was to have a telling effect on the Blades: though they ended that day in 12th their form improved as the season progressed, to such an extent that when they completed their campaign they were in second place and all set for promotion. Unfortunately their city rivals Sheffield Wednesday, one point behind them, had a game still to play: they drew 0-0 and went up because their goal average was superior by a meagre 0.008. So had the Blades conceded only one fewer goal on that day in November they would have gone up instead – and to make matters worse, Wednesday’s opponents in that final game? Tottenham. SB

Whisper it, but Steve Bruce now has an actual selection headache. The return of Florian Lejeune this week from a serious knee injury after almost a seven month-absence from first-team duty is a big boost for the Newcastle manager, even if it is the one area of the field in which he probably doesn’t currently need a boost. Newcastle’s defensive home form has been excellent with four goals conceded in six league games at St James’ Park this season, and hopes are high for the visit of Bournemouth after last week’s 3-2 away win at West Ham, where both Ciaran Clark and Federico Fernández chipped in with goals. With Fabian Schär in line to return alongside Jamaal Lascelles, suddenly Bruce has options for his three-man defence. Lejeune is short of match fitness but was one of the best players at the club last season, and it will be interesting to see who Bruce opts for at the back. MB

9) Will Potter be tempted to attack at Old Trafford?

Brighton have won three of their past four games to rise to their current league position of eighth, but the key question facing Graham Potter is whether to stick with the 4-4-2 formation that has brought those positive results, in which Aaron Connolly partners Neal Maupay in attack, or to leave the 19-year-old Irishman on the bench and start with a single centre forward in search of greater solidity, as he has in every away game except last month’s trip to Aston Villa, in which Aaron Mooy was sent off in the first half, Connolly was withdrawn at the break and Brighton lost 2-1. Should he take the more attacking option, it would be a demonstration not only of Brighton’s increased confidence but also of Manchester United’s diminished standing. Four of the past five games between these teams at Old Trafford have ended 1-0 to Manchester United, the exception being last season’s, which ended 2-1. SB

10) Villa have potency to prey on Wolves’ weaknesses

This game presents Wolves, who are following a run of six away games in seven with two home fixtures in four days, with a rapid opportunity to avenge their 2-1 away defeat in the Carabao Cup 10 days ago. But they have won only one home game in the league all season – against Watford, in what was possibly the visitors’ poorest display of the season – and are facing an Aston Villa team who are better than their league position suggests. Since August Villa have lost only at Arsenal (just – they were winning with nine minutes to play), at home to Liverpool (just – they were winning with three minutes to play) and at Manchester City, where they made it to half-time without conceding, and only five clubs have had more shots this season, while only Spurs and the current top five have outscored them. SB