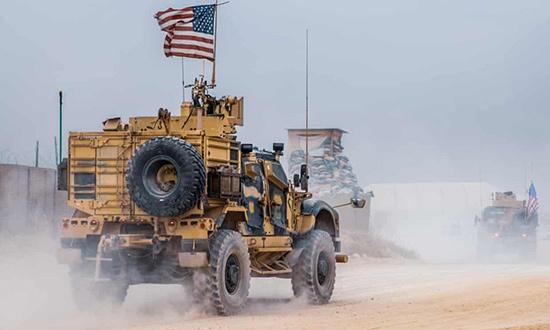 While US military says mission is to defeat Isis, president insists taking oil is fair ‘reimbursement’, but violates rules of war

Julian Borger in Washington – The  Guardian

US forces at an undisclosed location in Syria in October. They returned to Syria to protect oil fields, days after President Trump ordered their withdrawal.
Photograph: Branden Bourque/US MARINE COPRS/DEPARTMENT OF DEFENSE/EPA

US officials are struggling to explain the mission of up to a thousand US troops in Syria, who have mostly taken up positions near oil fields in response to Donald Trump’s orders.

A fortnight after ordering a complete evacuation of US troops ahead of a Turkish incursion into northeastern Syria, abandoning Kurdish partners in the fight against Isis, Trump changed his mind and said some forces should stay but only to “secure the oil”.

So as hundreds US special forces are being flown out of Syria, hundreds of other soldiers, equipped with armoured vehicles, have been driving into the region, heading for small-scale oil patches Der Ezzor and Hasakah provinces, but without a clear idea of what they were supposed to do there.

The unease of US officials implementing the policy became apparent on Thursday when an internal report by the top US diplomat in northern Syria, William Roebuck, was leaked to the New York Times. In the report, Roebuck complains that “we didn’t try” to deter the Turkish incursion, which has killed hundreds of civilians and displaced hundreds of thousands.

“US policy in eastern Syria these days seems to be an attempt at building a plane already in flight,” Kayleigh Thomas, research associate for the Middle East Security programme at the Centre for a New American Security (CNAS), said.

“For example, if Syrian government forces were to attack, would [US troops] then respond in self-defence? It looks like some of those legal questions are still being hashed out.”

The mission initially sounded straightforward as Trump presented it.

The president suggested that taking possession of Syrian natural resources would be fair “reimbursement” for the cost of going to war there.

The problem for military planners is such pillage of a foreign country is a violation of the laws of war as applied in the Nuremberg trials and commonly accepted since.

It could also violate the Authorisation for Use of Military Force granted by Congress to the US government in the immediate wake of the 9/11 attacks, intended for operations against al-Qaida and “associated forces”, which has been used to justify armed intervention across the Middle East.

The Pentagon sought to bring clarity on Thursday, by insisting that the mission was unchanged, and that US troops were in Syria solely to defeat Isis in partnership with the Kurdish-led Syrian Democratic Forces (SDF).

“The securing of the oil fields is a subordinate task to that mission. And the purpose of that task is to deny ISIS, the revenues from that oil, infrastructure,” Rear Admiral William Byrne, the vice director of the joint staff, told reporters. “I’m not sure Isis is going away yet. And that’s why we’re there: to help them go away.”

He added that the US would continue to arm the SDF, who are currently in conflict with Turkey, a Nato ally.

“We’re still going to provide them with the support and ability to … continue the fight against Isis,” Byrne said, describing the relationship with the Kurdish-led force as “shoulder to shoulder”, a phrase he repeated four times..

The Pentagon spokesman, Jonathan Hoffman, said part the aim of deploying troops to the oil fields was to ensure that any revenues from their production would go to the SDF.

The new talking points stress continuity and present an argument for the legality of the deployment, but they directly contradict the president. Apart from his continued insistence that the US should benefit from the oil, Trump has declared that Isis is totally or “largely” defeated, particularly after the killing of its leader Abu Bakr al-Baghdadi, and that taking care of the remnants was a job for someone else.

Charles Lister, a Syria expert at the Middle East Institute said that some of the confusion stems from the internal dynamics of the administration in which senior policy-makers, like Syria envoy, James Jeffrey, have exploited Trump’s obsession with oil to achieve other objectives.

“The whole oil thing is by and large a ploy to get presidential support to hold together a US presence, to shore up relations with the SDF and the tribes in the east who have been anti-regime and anti-Iran,” Lister said.

Nicholas Heras, an analyst on the CNAS Middle East programme, said the real reason for sending mechanised US units to the eastern oilfields is to keep the oil out of the hands of the Assad regime and its Russian backers.

“To counter Isis you need lighter, more agile forces,” Heras said. With winter coming, and the regime increasing desperate for energy supplies, control of the oil supply maintains some leverage in the region. In February 2018, US forces fought an intense battle with regime-backed militiamen and Russian mercenaries around a gas plant outside Deir Ezzor city.

The defence secretary, Mark Esper has suggested that one of missions of US troops would be to continue to deny access to the oil to the regime and Russia. The Pentagon sought to play that down on Thursday, focusing on a potential Isis threat, but Hoffman said that US troops would defend themselves against any attackers.

“Everyone in the region knows where American forces are,” the spokesman said. “We work to ensure that no one approaches or has hostile intent to our forces. And if they do our commanders maintain the right of self defense.”

The contradictions and uncertainties underlying the US presence are likely to come to the fore in the next few days, as Turkish, Syrian regime and Russian troops move into previously SDF-run areas and as the Turkish president, Recep Tayyip Erdoğan, visits the White House.

However, Turkish-backed Arab militias are reported to be pushing towards the town of Tal Tamr, which is outside the zone Kurdish forces agreed to withdraw from.

Steve Gumaer, the head of the Partners Relief & Development aid organisation, who was in Tel Tamr last week said the current front was only 4km north of the town.

“All the time we were there has been non-stop fighting. People are being killed and injured every day,” Gumaer said.

A senior administration official expressed concern about the possibility that the militias involved around Tal Tamr were not under Ankara’s full control.

“It’s basically these Turkish-supported Syrian Arab militias that are in there,” the official said. “And we were very concerned because they were seemingly heading towards the city of Tal Tamr, which is a relatively large Christian area, which everybody acknowledges is outside of [the agreed Turkish zone].”

“The problem is that the people doing the fighting are these ill-disciplined Arab militias, some of whom we’ve worked with in the past when we were arming the opposition, but many of whom are ill-disciplined, and relatively radical, and their ideology is essentially Islamic ideology.”