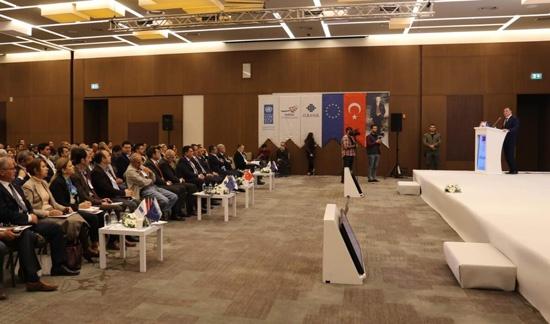 The United Nations Development Program (UNDP) and Hatay Metropolitan Municipality have joined forces to reduce greenhouse gas emissions at the local level, in a bid to tackle climate change issues and the effect of the high influx of migration on the environment.

The EU-funded “Carbon Footprint Inventory and Climate Change Action Plan” project aims to strengthen municipalities, while increasing the resilience of institutions, communities and individuals against crises.

With an event on Nov. 7, the project’s closing meeting took place as authorities and officials provided information on the action plan’s process and progress.

The project kicked off on Feb. 21 and lasted about seven months.

The Hatay Metropolitan Municipality pledged to reduce its carbon emissions, in diminishing returns, industry by industry until 2030, said Faik Uyanık, the communication director of UNDP Turkey.

With the participation of relevant parties, two workshops were conducted on July 3 and July 31.

During these workshops, the current situation was assessed, and reduction methods were determined for every industry, Uyanık conveyed.

“Hatay is one of the places in Turkey that has a high-risk share in the climate crisis. We do not say ‘climate change’ anymore, it is a crisis now,” the director underlined.

The Hatay Metropolitan Municipality aims to reduce its carbon emission level by 23 percent with this project.

For the plan to actualize, gas emissions should be reduced by 13 percent from construction activities, 5 percent from wastes, 4 percent from agriculture and 2 percent from transportation, according to a report prepared by the municipality.

Hatay’s total greenhouse gas emissions was over 17.6 million tons in 2017, the report conveyed.

According to the report, the share of firm energy is highest in emissions, with 43 percent. Industrial processes and product use follow the former with a 39 percent share. While transportation has a relatively little impact on emissions, as it has a 10 percent share, wastes have the littlest share with a rate of 2 percent.

Per capita emissions of a regular Hatay resident is 3.2 tCO2e/person, a significantly lower that Turkey average, 6.6 tCO2e/person, the report conveyed.

The numbers on per capita carbon footprint has a direct relation with the increase in population in Hatay’s districts, according to the report.

Increasing returns of population has an undeniable effect on environment degradation and climate change, according to Sukhrob Khojimatov, the UNDP’s deputy resident representative.

“Indeed, population movements and environmental concerns and climate change are increasingly connected,” he said during a speech at the closing meeting.

“At the local level for a municipality like Hatay which witnessed a sudden increase of its population by 25 percent, this additional refugee population represents an increase in waste and wastewater generation, reducing landfills life cycle and contributing to increasing greenhouse gas emissions,” he added.

Khojimatov stressed that Hatay has been one of the main partner municipalities of the UNDP.

He added that the expanded population pushed the international organization to invest more in projects in Hatay.

“This led us to invest in major infrastructure projects whereby around 10 of them were implemented so far, worth around $10 million, to support Hatay municipal services such as construction of solid waste transfer stations and construction of a wastewater treatment plant which will be completed soon thanks to the funding received from the EU Facility for Refugees in Turkey,” he said.