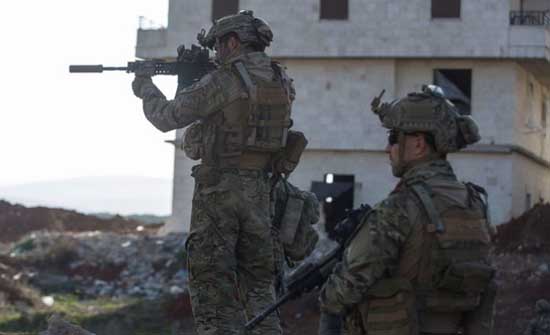 The US is investigating whether Turkey violated agreements with Washington about the use of US-provided weapons and equipment, including whether Ankara improperly transferred US-supplied weapons to its proxies in Syria, groups that some US officials say may have committed war crimes as part of the Turkish-led incursion targeting America’s Kurdish allies, according to CNN.

A US defense official told CNN the US government currently believes the allegations that Turkey has violated end-use monitoring agreements are “credible,” prompting the review.

Turkey’s incursion into Syria targeting America’s Kurdish allies in the fight against ISIS has been met with broad bipartisan opposition in Congress and has led many lawmakers to call for a suspension of US arms sales to Turkey, as many Europeans nations have.

A bipartisan group of US senators led by Sen. Lindsey Graham, a Republican from South Carolina, and Sen. Chris Van Hollen, a Democrat from Maryland, wrote a letter to Secretary of State Mike Pompeo on Wednesday asking if Turkey had violated the terms of the Trump administration-negotiated “ceasefire” between Turkey and the Syrian Kurds given reports that Turkish-backed forces had expanded the scope of their offensive into Syria.

“On several occasions, President Trump has threatened to ‘destroy Turkey’s economy’ should Turkey violate its obligations. In keeping with this position, we ask that the Administration take swift measures to enforce the October 17 agreement with tough economic sanctions,” they wrote.

A senior State Department official earlier Wednesday seemed to downplay potential violations, telling reporters, “We’re still on a where-the-edges-are question as opposed to any major Turkish offensive that would clearly mark a, quote, ‘violation’ of the understandings.”

The State Department announced Wednesday that an interagency US delegation led by the US special representative for Syria engagement and special envoy for the Global Coalition to Defeat ISIS, Ambassador James Jeffrey, would travel to Turkey for meetings with senior Turkish officials and members of the Syrian opposition this week.

The US supplies billions of dollars’ worth of weapons and other military equipment to countries around the world, but it requires recipients to sign agreements about how that equipment will be used that often place restrictions on how it is used as well as prohibitions on it being transferred to third parties.

“The United States works to ensure US-origin defense equipment is being used in the manner intended and consistent with the agreement or licenses under which the arms were transferred,” a second US defense official told CNN.

“Recipients of US-origin defense articles must agree to make items available for end-use monitoring for the life of the equipment and may not retransfer equipment to a third party without first receiving US authorization,” the official added.

US officials have told CNN that Ankara gave its Turkish-backed militias in Syria large amounts of weapons and equipment, including tracked armored vehicles, equipment that allowed them to advance quickly into Syria and seize portions of a strategic highway that runs east to west, an area where US officials say Turkish-backed forces possibly committed war crimes.

“The problem is that the people doing the fighting are these ill-disciplined Arab militias,” a senior State Department official told reporters Wednesday when asked about the Turkish-backed proxies, adding that many of them are “relatively radical.”

“By all of the rules of — as we understand international affairs, if you have a force that you support, supply, provide air support for and, essentially, effectively command and control, and that is the situation of the government of Turkey over these Turkish-supported organizations, then you bear at least part of the responsibility” for their actions, the official added.

If Turkey has transferred US-supplied military equipment to its proxies, such an action would therefore constitute a violation of those agreements.

Senior State Department officials have previously refused to say on the record whether they find the allegations that Turkey has violated its agreements with the US to be credible.

“We are monitoring all kinds of reports, open source reports, formal reporting. It is certainly of concern, the posture, so as far as being able to talk about any validity or verification I’m not going to do that,” Assistant Secretary of State for Political-Military Affairs R. Clarke Cooper said last week.

Asked by CNN if the US would hold Ankara responsible if the Turkish-backed Syrian militias obtained or misused munitions initially supplied by the US to Turkey, Cooper said, “That would certainly be a point to be addressed.”

Congress has demanded information on whether Turkey has violated its agreements with the US, with a bipartisan group of senators also writing to Secretary of State Mike Pompeo about the issue late last month.

“Have any U.S.-origin defense articles been used in connection with the Turkish offensive in Syria, including in connection with the use of chemical weapons? If so, was any such use in violation of the applicable end use agreements, and if so, how does the Administration intend to respond?” wrote senators Van Hollen, Patrick Leahy, Marsha Blackburn and Richard Blumenthal.

The House of Representatives recently passed a sanctions bill aiming to punish Turkey for its Syrian incursion. The bill would curtail some arms sales to Turkey but grants the Trump administration the ability to issue waivers that would likely allow such sales to continue.

Erdoğan announced on Wednesday that Turkey has captured a wife of the late ISIS leader Abu Bakr al-Baghdadi while also appearing to downplay a recent US military operation that led to Baghdadi’s death.

“The US said that Baghdadi killed himself in a tunnel and started a serious PR campaign. We captured his wife, but we didn’t make a fuss, I’m declaring this for the first time,” Erdoğan said, referring to Trump’s televised address in which he revealed details of the raid.

‘Daesh is Today’s Werwolf’ – Eyewitness About Nazi Militia in 1945