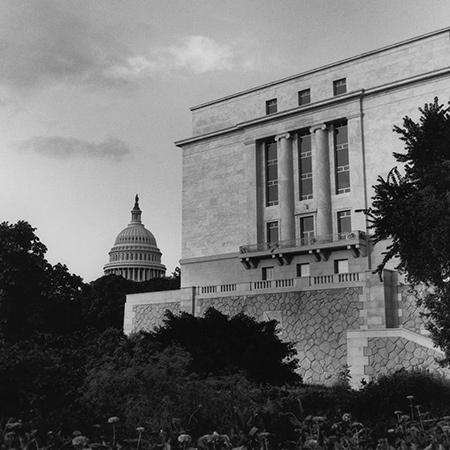 With public hearings on the impeachment of Donald Trump scheduled for next week, the chances of a similar coalition emerging this time appear slim.

By Michael Luo  – The New Yorker

During Watergate, seven congressmen began meeting in secret, realizing that the President’s fate was in their hands.

The Nixon impeachment inquiry had dragged on for more than six months when a group of mostly moderate lawmakers on the House Judiciary Committee—four Republicans and three Southern Democrats—began meeting in secret, in July of 1974, at the office of Tom Railsback, a popular Illinois Republican who was a leader in the Party’s reform movement. The committee’s staff had recently drawn up draft articles of impeachment for the members to consider, and public hearings were scheduled to begin at the end of the month, followed by a vote. It was not at all clear, however, that impeachment would be successful. Democrats controlled the House and Senate, but failure to secure a bipartisan vote in committee, in all likelihood, would mean that Richard Nixon would survive a House vote on impeachment and escape a Senate trial. The House members who gathered in Railsback’s office “realized that the impeachment of the president was in their hands,” the historian Timothy Naftali writes in the new book “Impeachment: An American History.” As Raymond Thornton, an Arkansas Democrat who was part of the group, later said, “I considered that this was most likely the most important task that I would ever have in government and that my whole effort should be given to the study of it and to try to come up with an answer that was fair and right and which I could live with for the rest of my life.”

Next week, the House Intelligence Committee is set to begin holding public hearings on the impeachment of Donald Trump, but the chances of a similar bipartisan coalition emerging—in either the House or the Senate—are slim. When participants in the “fragile coalition,” as the group came to be called, decided to support articles of impeachment, they effectively ended Nixon’s Presidency. Two weeks later, Nixon resigned. The following year, all seven members of the group agreed to be interviewed by historians from St. Joseph’s College, in Rensselaer, Indiana, and participated in a series of recorded group conversations at a resort in Hilton Head Island, South Carolina. The transcripts make for instructive—and deflating—reading, underscoring just how much partisanship and tribalism has distorted our politics in the nearly half century since Watergate.

It was Walter Flowers, an Alabama Democrat, who first approached Railsback and proposed that they convene a meeting of committee members from both parties. Flowers’s district had gone overwhelmingly for Nixon in the 1972 election. Railsback and Flowers had been friends for several years and played paddle ball together. After one hearing, Railsback recalled, “Walter said, ‘Rails, why don’t you get your guys together, and I’ll get mine and let’s sit down and visit about this.’ ” The seven congressmen met for the first time the following day in Railsback’s office in the Rayburn House Office Building. Railsback, the most senior moderate Republican on the committee, was viewed by members of both parties as a critical undecided vote. He could make it possible for other Republicans to consider impeachment. He had invited a number of Republican colleagues but was unsure of who would show up. Caldwell Butler, a conservative freshman from a staunchly Republican district in Roanoke, Virginia, was perhaps the most surprising attendee. Butler had heard about the meeting from Jim Mann, a Democrat from a conservative district in South Carolina, and told him that he was interested in joining.

In considering the first use of impeachment against the executive branch in more than a century, the members of the group—all former lawyers—had set about their work with a level of seriousness and attention to detail that they believed was in keeping with the enormity of the task. Railsback recalled a pivotal weekend, just before the group met, when he returned home to Western Springs, Illinois, and was able to carefully examine documents prepared for the committee by John Doar, the inquiry’s lead counsel. “I could see that the President had, in fact, not been telling the American public the truth, and this was direct involvement on his part,” he said. “There were statements that he made that had been reliably contradicted. And that all of the sudden gave me a sense of decision and conclusion and finality that I could vote for impeachment and have good evidence behind me.” Thornton, whose district voted overwhelmingly for Nixon, rented an apartment in Washington for the month of July, so that he could skip the daily forty-five-minute commute to and from his house in Virginia and concentrate on impeachment. “I stayed there throughout the entire period of time and had a little single bedroom foldout bed,” he said. ”It gave me two hours a day that I wouldn’t have had otherwise.”

The men were all conscious of the potential political fallout in their districts. “The mail got so bad that the staff stopped showing it to me,” William Cohen, a Maine Republican who went on to the Senate and was later appointed Secretary of Defense, in the Clinton Administration, said. “It was so vicious and violent, anti-Semitic. It was obscene.” But Cohen had resolved to set aside political considerations. “I had reconciled myself to the fact that whatever I did that it was going to be difficult for me, back in my district, difficult to explain to my constituents,” he said. “What I was more concerned with was that I did what I felt was right.” Hamilton Fish, a New York Republican, had “come to the decision that you could not conduct this by a poll,” he said. Impeachment was a “very defined constitutional responsibility, which the public had no bearing on it whatsoever.”

During their first meeting, beginning at about 8 A.M. on Tuesday, July 23rd, the seven men sat together around a long table and, over breakfast pastries and coffee, began talking through the particular issues that had troubled them during the hearings. It quickly became clear that they were all leaning toward impeachment, focussing, in particular, on the Watergate coverup and Nixon’s manipulation of governmental agencies, such as the C.I.A., F.B.I., and I.R.S. The consensus in the group was that the final articles of impeachment should emphasize charges of abuse of power and obstruction of justice that could be tied directly back to the President. Over the next few days, they labored over the language of the articles and began circulating their work with the rest of the committee. Word filtered back to the White House that Nixon’s support among Southern Democrats had disintegrated. The end of the Nixon Presidency was finally visible. “The committee is ending up with a solid bipartisan group—including conservative Southern Democrats—in favor of impeachment, and this fact has already had a powerful impact on the House, and will have a similarly strong impact on the Senate and on the country at large,” Elizabeth Drew wrote in this magazine. “It will be realized that this widely disparate group studied the evidence at length—and now its seemingly deliberate pace is seen as helpful, too—and took a stand for impeachment.”

The obvious question is whether such a fragile coalition could ever come together today. Because of their centrist leanings, the seven freshmen Democratic members—the so-called Security Democrats—who co-published an op-ed in the Washington Post backing an impeachment inquiry on the Ukraine allegations, resemble, in some ways, the Southern Democrats during Watergate. But moderate Republicans, in the mold of Railsback and Cohen, are virtually nonexistent in Congress today. The G.O.P. has moved rightward, and Trump has remade the Party in his own image. For any member whose loyalty wavers, the conservative media machine is unrelenting.

Meanwhile, the Republican minority on the Judiciary Committee, the body that would conduct the initial vote on articles of impeachment, is populated by Trump stalwarts like Matt Gaetz, of Florida, who, last month, led the group that stormed the secure room where the Intelligence Committee was conducting its depositions, and Louie Gohmert, of Texas, who recently said that impeachment was pushing the country toward “civil war.” According to the transcripts released by the House Intelligence Committee, so far, Republicans have largely treated the closed-door witness testimonies with contempt—grandstanding, lambasting the process, and openly indulging in conspiracy theories. When the House voted, last week, on whether to approve an impeachment inquiry, not a single Republican supported it. “They’re acting out of fear or complicity,” Cohen told me in a telephone interview this week. “It’s the silence of the lambs.”

Yet it does not seem impossible for the dynamics to shift. Nineteen Republicans in the House and four Republicans in the Senate have announced that they will not seek reëlection next year, which, theoretically, could free them to vote their consciences. The lawmakers leaving Congress include Will Hurd, of Texas, the lone African-American in the G.O.P. caucus and a well-known moderate, and Francis Rooney, of Florida, who became the first Republican member of Congress to indicate that he was open to supporting articles of impeachment against President Trump. “I want to get the facts and do the right thing, because I’ll be looking at my children a lot longer than I’m looking to anybody in this building,” Rooney said last month. Among the Senate Republicans, twenty of whom would need to join Democrats in removing Trump, Mitt Romney, of Utah, has been the most vocal Republican critic of the President on Ukraine, but other possible allies for Democrats on impeachment include Lamar Alexander, of Tennessee, who is retiring next year and has a record of working with Democrats over the course of his four-decade career; Lisa Murkowski, of Alaska, who has been critical of the Trump Administration; Cory Gardner, a vulnerable senator from Colorado who is up for reëlection; and Susan Collins, who faces a tough race in Maine.

Ultimately, a bipartisan impeachment of Trump could begin modestly. All that is needed is for a handful of Republicans to weigh impeachment with the same sense of duty as the members of the fragile coalition did during the historic summer of 1974. That, in turn, could embolden others. The future of American democracy may, once again, depend on a willingness to prioritize the Constitution and our system of governance over party and politics.

Michael Luo is the editor of newyorker.com.