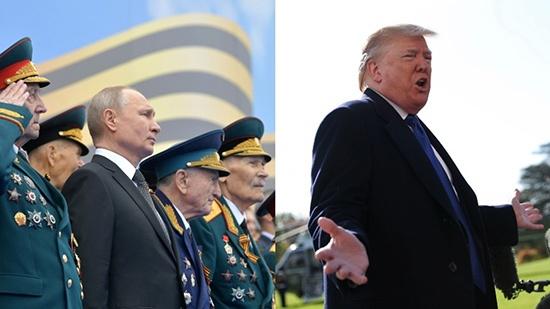 www.rt.com/news-US President Donald Trump managed to trigger his critics again by saying he would love to go to Russia for the celebration of victory in WWII – which a reporter and most media misnamed as the long-nonexistent “May Day parade.”

“I would love to go if I could,” Trump said on Friday, answering a reporter who had asked if he would go to the “May Day parade” in Moscow next year. “I am thinking about it.”

Trump noted it was in the middle of the campaign season for the 2020 US presidential election, so he might be busy. The mere mention of the possibility of going to Russia is enough to send the US president’s critics into a frenzy, but the mention of “May Day” had them additionally shrieking in outrage.

“All roads lead to Putin!” exclaimed Raw Story, rolling out a gamut of #Resistance Twitter reactions echoing that line from House Speaker Nancy Pelosi. Leading the way was CNN anchor Jim Sciutto, who characterized the parade as “a celebration of Russian military power, which Putin is using to undermine US national security interests across the globe.”

Another typical take was that, if Trump is choosing to attend “Russia’s May Day Military Parade,” it was hypocrisy to keep arresting actress Jane Fonda over a climate protest every Friday.

The trouble with all these hot takes is that there is no such thing as the “May Day military parade,” and hasn’t been in over 50 years. During the Cold War, the Soviet Union did roll out the tanks and missiles on Red Square for International Workers’ Day, but the last such military display was in 1968.

Trump’s own response on Friday – “It’s a very big deal, celebrating the end of the war” – indicates he knew perfectly well to which event he’d been invited: the 75th anniversary of the Allies’ triumph over Nazi Germany in the Second World War, which Russia will celebrate on May 9, 2020.

Sciutto wasn’t the only one to conflate the real V-Day event with the long-defunct Soviet practice. Reuters national security correspondent Jonathan Landay called it the “Army Day” supposedly used to display “arms for use against US, like YARS ICBM last year.” This prompted Business Insider’s John Haltiwanger to correct the record.

Even the Washington Post’s dedicated Trump-hounding fact-checker felt the need to point this out, noting the president “seems to have been led astray by the faulty question.”

Agreeing with Trump on anything, however, seems to make the DC press corps deeply uncomfortable. Haltiwanger quickly tweeted that the US president’s attendance at the V-Day parade would “offer a major public relations victory to Putin at a time of historic animosity between Moscow and Washington.”

Sciutto wouldn’t let the issue go either, arguing that in Soviet times the parade was a “showcase of Russian military power” and “a salute to the Soviet leaders buried there” – even when repeatedly corrected by more knowledgeable people online.

While Russian Communists continue to hold rallies on May 1, there has not been a military parade for this date in Moscow in over half a century. The Vladimir Lenin mausoleum on Red Square is never used as a stand for Victory Day parades, and while there is a necropolis for Soviet leaders beneath the Kremlin walls, there is no “salute” to them for V-Day.

Head of Pfizer pharmaceuticals says vaccine could be ready by October

Asia eyes economic recovery, HK on edge over US move