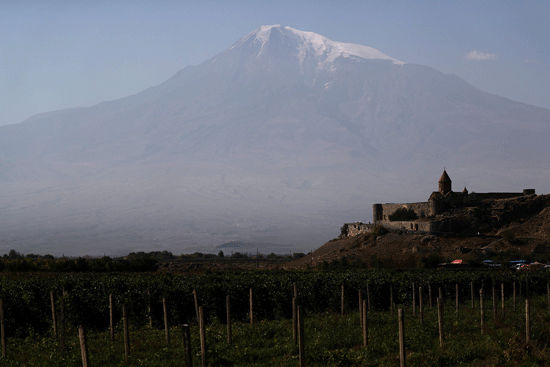 Bloodless revolutions from Armenia to Lebanon are about ending the fatalism corrupt rule engenders.

Weeks of mass protests against corruption and cronyism brought down the old Armenian political class in 2018.Credit…Sergei Grits/Associated Press

YEREVAN, Armenia — It has been 30 years since the fall of the Berlin Wall. A guard threw open a gate, the Soviet imperium folded, more than 100 million people in Central and Eastern Europe were freed, a divided continent was made whole, and the end of history was announced.

What to make of the three decades after Nov. 9, 1989? Poverty receded. Lives got longer. Human exchange became borderless. Artificial intelligence started making things smart. China rose, as did sea levels. The United States, attacked and wounded, tried managed decline, and at last, in wild frustration, elected a loudmouthed con man to its highest office. History, not terminated after all, ushered in a new wave of nationalism, nativism and xenophobia.

Water is the new oil. Data is the new plutonium. Climate is the new Armageddon. The talk in 1990 of the inevitability of a world of liberal democracy turned to predictions of a world of autocrats buttressed by the surveillance states that technology has enabled. It has proved impossible for technology companies to do no evil.

The best of all possible worlds was deferred yet again. Joachim Gauck, the Lutheran pastor and anti-Communist East German activist who later became president of a united Germany, captured the illusions and shattered hopes of 1989 best: “We dreamed of paradise and woke up in North Rhine-Westphalia.”

Of course, North Rhine-Westphalia is not bad, but in our polarized all-or-nothing political age not bad is generally not good enough. In the forgotten-words stakes, compromise rivals statesmanship.

Big things changed, and small. My lackluster soccer club, Chelsea, got a Russian oligarch as owner and, with his billions, started winning trophies. I’d never thought the fall of Communism could so directly affect my mood. The Russians arrived — on the Côte d’Azur, on the beaches of Vietnam and, of course, in Syria. And here in Armenia, the great Armenian saga of tragedy, migration, reinvention and survival took another twist.

The Soviet Union fell apart. The Republic of Armenia became an independent state in 1991. It got a tiny piece of the worst possible real estate Armenia had occupied over the millenniums of its history, but still it was something.

In every office there are images of Mount Ararat, which rises in Turkey, a symbol for Armenians of longing, pride, the hope of return and the suffering of the Armenian genocide that began in 1915 and involved the Ottoman Empire’s killing of more than one million Armenians.

The House of Representatives, defying familiar Turkish warnings, this week passed a resolution recognizing that genocide. President Barack Obama never recognized it publicly, despite a promise to do so as a presidential candidate in 2008. Realpolitik won out over his principles.

During a 2015 flower-laying ceremony at the Tsitsernakaberd Memorial commemorating 100 years since the Armenian genocide, people hold photographs of some Armenian intellectuals arrested by Ottoman forces in 1915.Credit…Kirill Kudryavtsev/Agence France-Presse — Getty Images

Turkey, which insists there was no organized campaign to slaughter Armenians, is not Armenia’s only problem. Comrade Stalin loved to tinker with nationalities and borders. Decades later, this caused friction between Armenia and Azerbaijan as the Soviet Union collapsed. The disputes culminated in war over the disputed Nagorno-Karabakh region a quarter-century ago. Today, Armenia’s border with Azerbaijan is closed. Its border with Turkey is closed. Only the borders with Georgia and Iran are open.

Yet I found Armenians in upbeat mood! What do physical borders matter these days? The nearly three million citizens of Armenia are in constant touch with the many more millions of Armenians in the diaspora, who are sending money home. With a strong tech sector, Armenia sees itself as a start-up country. It’s looking forward more than back.

The country’s bloodless revolution in 2018 has not delivered paradise, but it has eliminated fatalism. People feel they have the freedom to try what they want.

Weeks of mass protests against corruption and cronyism brought down the old Armenian political class, much as massive demonstrations in Beirut, Baghdad and Santiago in recent weeks have brought down or shaken the governments of Lebanon, Iraq and Chile.

The spirit of 1989 has not been trampled underfoot by Russia’s Vladimir Putin and China’s Xi Jinping, after all. People prefer agency to the dead hand of unaccountable rule. They prefer the rule of law to arbitrary arrest. That’s why they are in the streets of Hong Kong.

Liberal democracy is not, as Putin has insisted, “obsolete.” It just needed a jolt.

Armen Sarkissian, the Armenian president, told me in an interview that old systems would not work. “We are living in a quantum world because more than half of life is virtual,” he said. The notion of democracies functioning through elections every few years is outdated. He called Armenia “one of the first labs” to find new “rules or behavior” for a world where every individual has a voice that “is exercised and expressed daily.”

One enduring lesson of 1989 is that the truth will out. Even the Trump White House will one day discover this.