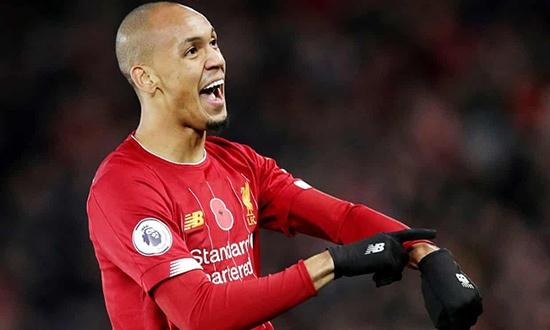 David Hytner at Anfield –  The Guardian

There had been little more than millimetres in it during the previous two meetings of English football’s current powerhouses. Remember John Stones’s goalline clearance for Manchester City at the Etihad last January in his team’s 2-1 Premier League win or when Kyle Walker did the same at the very end of the Community Shield at the beginning of this season? City would squeak to victory that day on penalties.

Liverpool authored a different story here, one underpinned by ruthless finishing and which came to be coloured by comfort. The much-hyped top of the table collision was effectively over when Sadio Mané headed Liverpool into a 3-0 lead on 51 minutes and what it all meant bristled with possibilities for his team and the club’s fans, who last knew what felt like to be league champions in 1990.

Liverpool briefly held a 10-point lead over City last December, although that was cut to seven the following day when Pep Guardiola’s team won their game in hand. And so the nine-point advantage which this victory gave to Liverpool over their Manchester rivals not only felt significant but like new ground. It remains early days in the title race but eight points in favour of a team that has lost just one league fixture in 18 months – that game at the Etihad – is quite the cushion. Jürgen Klopp made the point in his programme notes that nothing would be decided here but this was a major statement of intent.

City rallied towards the end when Bernardo Silva arrowed a low shot inside the corner from Angelino’s deflected cross and they shouted loudly for a penalty in the 84th minute when Raheem Sterling sent a cross at Trent Alexander-Arnold’s hand from close range.

Guardiola was particularly vexed because the Liverpool full-back had got away with something similar at the very start of the game – moments before Fabinho opened the scoring. Nobody knows how fine the margins might have been if City had been granted the late penalty or, indeed, the early one. They had a couple of flickers in the closing stages but, despite a sudden outbreak of nervousness among the home support, Liverpool closed out the result.

For City, who had only won once previously at Anfield in 38 years, this had seemed like a must-not-lose but they felt the game move away from them in the early running, when their first penalty appeal was turned down. Silva appeared to handle as he smuggled the ball across and then it flicked off Alexander-Arnold’s outstretched arm.

City could not believe that the claim was overlooked and their grievance was quickly compounded when Liverpool went up to the other end to take control. Mané’s low cross was not cleared with any conviction by Ilkay Gundogan and, when Fabinho strode onto the ball 25 yards out, with no City challenge incoming, everybody knew what he wanted to do.

The Liverpool midfielder did it brilliantly, taking a touch and unleashing the sweetest of drives that ripped past Claudio Bravo and into the left-hand corner. No goalkeeper likes to be beaten from such a distance but Fabinho’s technique and precision set the perfect tone for Liverpool. It also offered a good omen. Klopp’s team had never lost previously in the league with Fabinho in the starting XI.

Liverpool turned the screw and their second goal was created by their marauding full-backs, the source of so much of what is good about their attacking game. Alexander-Arnold switched the play from right to left and Andy Robertson’s cross invited Mohamed Salah to rush in on Angelino’s blindside. Salah’s header gave Bravo no chance. Was the Liverpool forward offside? VAR said no. It was fiendishly tight.

Never mind City’s record at Anfield, Guardiola was up against the opponent that, on a statistical level at least, had come to feel like his nemesis. The City manager entered the game having lost seven of 17 to Klopp in all competitions – more than he had against any other rival.

How Guardiola set up was always going to be fascinating, after the tweaks that he implemented for the corresponding fixture here last season. For that match in October, he ordered his players to slow down the tempo, to compress the space between the lines and the result was a 0-0 stalemate.

City were more proactive here, with Kevin De Bruyne in the No10 role, and they had a fistful chances before the interval, none better than the free header that Sterling glanced wide at 1-0. Neither Sergio Agüero nor Stones could get a touch to a tantalising De Bruyne free-kick; Agüero flickered without truly menacing and Angelino sent a deflected shot against the post on 29 minutes.

But as City tried to make the game, they invited Liverpool to counter, which tends to be a bad idea. It was end to end, wonderfully entertaining and Liverpool could point to their own first-half openings. Gini Wijnaldum was close with a deflected effort; Roberto Firmino worked Bravo after a storming Alexander-Arnold run and Salah also extended the goalkeeper.

City’s patched-up backline was too loose and the manner in which they conceded the third goal illustrated the point. Jordan Henderson drove for the byline and, at first, City appeared to have the numbers to control a player who is not noted as a flying winger.

Yet Gundogan passed him on to Angelino and the left-back did not prevent the cross, which Henderson dug out expertly for the far post. Mané had found space around the back of Walker, his header was firm and Bravo could only pat it into the side of his net. City continued to fight, with Sterling increasingly dangerous, but Liverpool had done the damage.