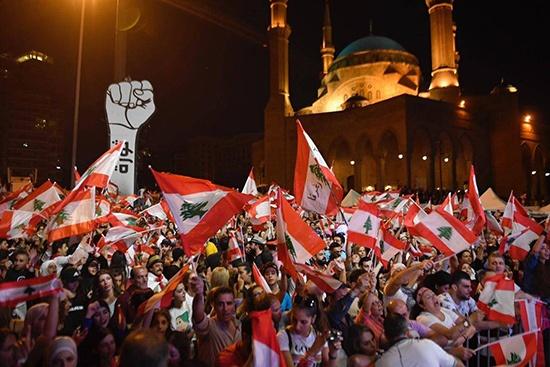 Even though the government announced an emergency reform package, the protests have continued to grip Lebanon and protesters continue to demonstrate against the ruling class.

BEIRUT: For the 25th day, students, teachers, mothers, and professionals mobilized in ever-greater numbers, making demands that are both specific and broad all around Lebanon this Sunday.

Even though the government announced an emergency reform package, the protests have continued to grip Lebanon and protesters continue to demonstrate against the ruling class. Secularism march, mothers demanding for their right to pass their nationality to their children, and students protesting for a better future, made their ways to Beirut’s Riad Al Soloh Square to reach a wider audience.

Some parents made sure to engage their children in the political activism, “I want my children to take part in this revolution, and I want them to grow in a better Lebanon,” Razane Naccache told Annahar.

During morning hours, several protests took place around different locations around Lebanon. Zaytouna Bay was packed with citizens who took the grounds and gathered for a picnic, where they had a traditional Lebanese breakfast as a new type of protesting against the illegal acquisition of coastal properties and to reclaim it as a public space.

A protester in Riad El Solh told Annahar, “we won’t stop protesting until we overthrow the whole current political figures.”

In parallel, other protesters also gathered outside Kleiyat airport, which has not started operating yet, demanding for its reopening as it could be of a facility of high importance for the region.

The highlight of the Sunday of Determination is the “Revolutionary Court” which was installed in the Riad Al Solh Square where actors mocked a trial for public figures who have allegedly taken money from the public funds. Jessica, another protester, told Annahar that the movement that is currently taking place is crucial to fight all the corruption in the country.

The scene in Tripoli is still witnessing crowds protesting in the thousands. In the southern coastal city of Saida, protesters also gathered to keep their voices high enough to show that nothing will shut their momentum down.

Lebanon has been swept by 25 days of protests against a political class accused of corruption, mismanagement of state finances and pushing the country toward an economic collapse unseen since the 1975-90 civil war.