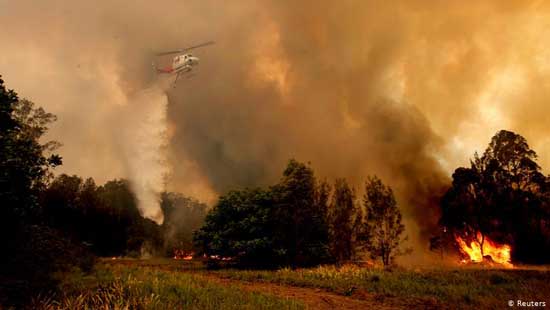 The premier of the Australian state of New South Wales has declared a state of emergency as deadly bushfires continue to rage. Three people have been killed so far, with fires now threatening the city of Sydney.

The Australian state of New South Wales declared a state of emergency on Monday due to ongoing, unprecedented wildfire danger.

New South Wales Emergency Services Minister David Elliott said on Monday that residents were facing what “could be the most dangerous bushfire week this nation has ever seen.”

Three lives have been lost in the state and more than 150 homes destroyed, with thousands of people displaced or forced to evacuate. The fires have razed 8,500 square kilometers (3,300 square miles) of forest and farmland since Friday.

More than 60 fires were still burning in New South Wales and Queensland on Monday morning.

Will the fires spread?

The declaration of emergency will last for a week. Emergency services are granted sweeping powers to instruct government agencies to conduct or refrain from normal duties.

Fire conditions are set to be at their worst on Tuesday. There are fears that Sydney could be threatened in the coming days.

“There is nothing built or designed to withstand the sorts of conditions that you can expect under catastrophic conditions,” said Shane Fitzsimmons, commissioner of the rural fire service for New South Wales, on Monday.

Sydney, Australia’s largest city, has a population of over 5 million people and has so far not been affected by the blazes.