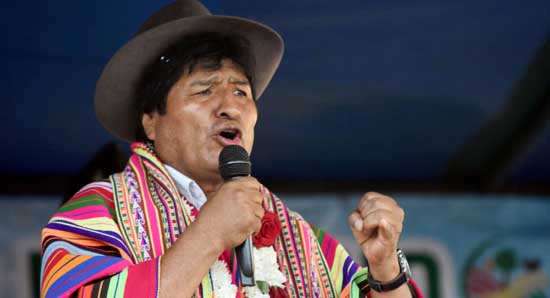 Evo Morales, who led Bolivia for 13 years, announced his resignation 10 November, Sunday, faced with calls to resign from the country’s military and police. Here are some of the key points about a lengthy career that brought significant changes to his country.

Morales was a distinctively leftist president who made it his policy to fight poverty and illiteracy in Bolivia. Upon his election in 2006, Bolivia had the highest illiteracy rate in Latin America – 16 percent. The country suffered from deep poverty – 35 percent of the population lived in ‘extreme’ poverty, and 58.9 percent lived in ‘moderate’ poverty, according to the Journal of Latin American Studies.

In 2014, in an article ‘Evo Morales has proved that socialism doesn’t damage economies,’ The Guardian said that, under Morales’s leadership, extreme poverty had declined by 43 percent and moderate poverty had declined by 25 percent, adding that social spending increased by over 45 percent, and the minimum wage was increased almost twice: by 87.7 percent.

The report noted that Morales’s economic achievements were praised by the World Bank and the International Monetary Fund although Morales began his tenure by ditching IMF recommendations.

Morales’s presidency was marked with vast increases in social programs. In particular, he introduced non-contributory old-age pensions and payments to mothers – but conditioned the latter on whether children were given regular health checkups and attended school, according to The Economist.

Other measures included giving away hundreds of free tractors, controlling fuel prices and forcing food producers to sell in the local market instead of export.

The vast majority of social spending, however, went to building paved roads across the nation, as well as bringing running water and electricity to areas that previously had neither.

The ground for Morales’s economic success was laid during his first presidential term, during which he did what many thought was the unthinkable: without nationalizing the national hydrocarbon extraction industry, he raised corporate taxes from 18 percent to a whopping 82 percent, which skyrocketed national oil and gas revenue, from $173 million in 2002 to $1.3 billion in 2006, according to a book: ‘Evo Morales: The Extraordinary Rise of the First Indigenous President of Bolivia’ by Martin Sivak.

The companies initially threatened to leave the nation, but eventually relented. Morales’s first year ended with no fiscal deficit, the first in 30 years for the country.

Under Morales, traditional coca growing was deemed legal, allowing the growing of some 50,000 acres  (202 kilometers square) of plantations across the country. Morales tasked local unions with checking that individual families did not exceed a quota of 1600 square meters of coca, according to ‘Evo’s Bolivia: Continuity and Change’ by Linda Farthing and Benjamin Kohl.

In 2012, Bolivia withdrew from 1961 UN convention which deemed coca plants illegal, and in 2013 convinced the UN Single Convention on Narcotic Drugs to declassify coca as a narcotic.

At the same time, Morales cracked down on cocaine producers, a move that showed mixed success due to reported police corruption.

Not everything in Bolivia was flowers and rainbows, however, as, since Day 1 of his presidency, Morales fought local autonomy movements, especially among the country’s Eastern provinces, movements that he had previously supported. Radicalized activists occupied airports, blockaded roads, and the unrest culminated in the 2008 Porvenir massacre, which took the lives of 12 protesters.

In 2009, the government sat with the opposition and adopted a new Constitution, changing 100 out of 411 clauses. The compromise document failed to satisfy the Eastern provinces, though.

Morales’s second term was mired in protests within his support base. Protesters demanded a higher minimum wage, and the reversal of several government reforms. Several provinces suffered from high unemployment and insufficient infrastructure investment. When the government dismissed the protests, referring them as succumbing to the political right, protests turned violent. Eventually, the government backtracked on many of its reforms.

Morales’s third term was overshadowed by the revelation of a child by Gabriela Zapata Montano, an employee of a Chinese company. Critics accused Morales of favoring the Chinese company, which Morales vehemently denied, according to a 2016 BBC report. Morales admitted having the child, who died in infancy, and the scandal damaged the president’s reputation, so much so he lost in 2016 polls to the opposition, according to another BBC report.

In November 2017, the Supreme Tribunal of Justice of Bolivia ruled that all public offices would have no term limits, allowing Morales to run for a third term, in violation of the 2009 Constitution.

On 20 October 2019, Morales entered his fourth term, but election results were deemed fraudulent by the opposition, sparking a new wave of violent protests. After the military joined the calls for resignation, Morales announced that he would step down.