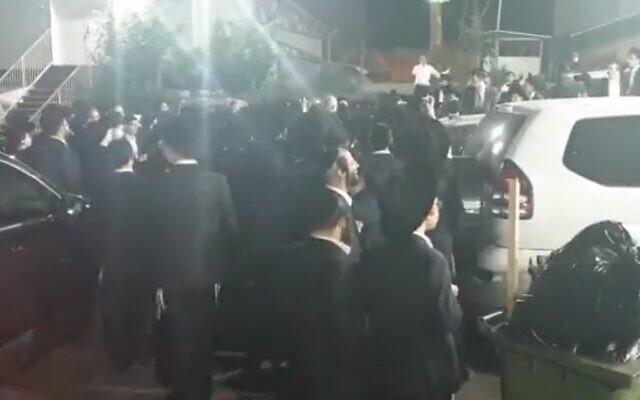 Blue and White leader Benny Gantz was booed Sunday as he entered the wedding of the son of ultra-Orthodox lawmaker Yaakov Asher, where protesters called him a “terrorist” and told him to “go to the Arabs.”

However, inside the function, Gantz was warmly welcomed, Hebrew media reported.

Blue and White leader Benny Gantz was booed Sunday as he entered the wedding of the son of ultra-Orthodox lawmaker Yaakov Asher, where protesters called him a “terrorist” and told him to “go to the Arabs.”

However, inside the function, Gantz was warmly welcomed, Hebrew media reported.

The incident occurred on the anniversary of the assassination of prime minister Yitzhak Rabin, who was shot dead by Jewish religious extremist, Yigal Amir, 24 years ago, according to the Hebrew calendar. Earlier in the day, Prime Minister Benjamin Netanyahu pushed back against longstanding allegations that, as head of the opposition in 1995, he did not speak out forcibly enough against inflammatory right-wing rhetoric in the lead-up to Rabin’s assassination.

Gantz is currently trying to form a government, and one of the main stumbling blocks has been Blue and White’s insistence that a coalition unity government not include the ultra-Orthodox parties. Asher is a lawmaker from the United Torah Judaism Party.

Right-wing parties have accused Gantz of planning to establish a minority government propped up by the Arab parties.

President Reuven Rivlin last month tasked Gantz with attempting to form a coalition, after Netanyahu failed in the wake of the September 17 elections. But Gantz’s chances of succeeding where the prime minister failed are seen as just as slim, with the Netanyahu-led bloc of 55 lawmakers Likud formed with ultra-Orthodox and national-religious factions vowing to only enter a government together.

The bloc has been a major stumbling block in talks between Likud and Blue and White. The two major parties have regularly blamed each other for the lack of progress in negotiations and sought to cast the other as responsible if the country is forced to go to another, third round of elections.

On Saturday Yisrael Beytenu party leader Avigdor Liberman presented a challenge to both Prime Minister Benjamin Netanyahu and Gantz, saying that if they do not accept tough compromises in order to form a coalition together, he will back the other candidate and renege on his pledge to only support a national unity government.

“Gantz must accept the president’s plan, including a leave of absence, and Netanyahu should say goodbye to his ultra-Orthodox messianic bloc,” Liberman told Channel 12 news.

Liberman implied that if Netanyahu refused to separate from the 55-MK bloc of right-wing and religious parties, he could support, from the outside, a minority government led by Gantz. Such an arrangement would see the hawkish right-wing leader allied with the Arab lawmakers, whom he has long accused of “disloyalty” and “terror support.”

Speaking at the weekly cabinet meeting Sunday, Netanyahu responded to Liberman by saying it was all a “show” and his ultimatum was in fact directed only at the Likud party and not at Blue and White, since he was only demanding that Likud ditch its partners and not Blue and White.

He quoted recent statements by Liberman — a right-wing politician who has for many years campaigned on aggressive messages against Arab Israelis — calling the leaders of the Joint List a “fifth column” and saying their true place was in the parliament in Ramallah rather than the Knesset.

Netanyahu then quoted a transcript published over the weekend by the Haaretz newspaper of a call between its journalist and MK Osama Saadi of the Joint List, during which Saadi said Yisrael Beytenu MK Eli Avidar had come for a meeting.

He claimed that was evidence that Liberman was “fully coordinated with the Joint List and Gantz.”