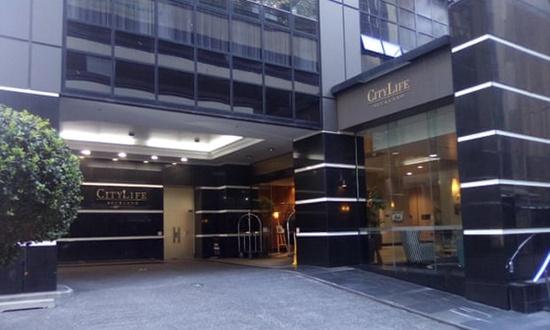 Tinder date says she was terrified after the accused sat on her, preventing her from breathing

The CityLife Hotel in Auckland, the last place where Grace Millane was seen alive, and where a second woman said she thought she would die during sex with the accused. Photograph: Benjamin Cooper/PA

A woman who went on a Tinder date with the man accused of murdering British backpacker Grace Millane has told an Auckland court of how she struggled to breathe during their sexual encounter and feared she would die.

The woman, whose name is suppressed, said the suspect, a 27-year-old New Zealand man, changed position so he was kneeling above her, and then, unexpectedly, sat on her.

“He had grabbed my forearms and put all the pressure on my arms so I couldn’t breathe and I couldn’t move my arms. I started kicking, trying to indicate I couldn’t breathe. I was kicking violently. He would have felt me fighting,” the woman said, crying. “I was terrified.”

The woman said she pretended she had passed out in an attempt to make the accused get off her. He remained in place, but she managed to turn her head to breathe. She estimated the ordeal lasted one or two minutes, and that she was fearful her friends and family would learn of her death.

“This can’t be the way I die,” the woman said she remembered thinking.

The accused is on trial for the murder of Millane, a 21-year-old British backpacker who was on a round-the-world trip when she disappeared on 2 December in New Zealand’s largest city during a date with the man, whose name has been suppressed.

Millane’s body was found inside a suitcase buried in dense bushland west of the city a week later. The 27-year-old man has pleaded not guilty.

On Monday, the jury heard how the woman whose name is suppressed was first matched with the accused in March 2018 when they went on a date in the Auckland suburb of Newmarket and then had consensual sex.

She went on another date with the accused in November 2018. She said she had thought the two would have a drink in Auckland’s city centre but when they met, the accused said he needed to change his clothes and they went back to his room at the CityLife hotel instead.

Once there, the plans changed again, and the two bought alcohol from a nearby shop and drank it in his hotel room. She said the accused then pushed her for sex, during which she was pinned to the bed and struggling to breathe.

She told the court that he told her in an accusing and cold tone: “‘You don’t think I did that on purpose did you?’

“I was still trying to catch my breath. I was just in disbelief and shock.”

The woman continued messaging with the accused for a number of months, telling the court she was concerned she had given him too much information about her life and that he would stalk her if she cut off contact.

“I didn’t want to aggravate him … I was scared.” the woman said.

During cross-examination, the woman repeatedly broke down in tears when questioned about the validity of her accusation that the accused had hurt her during their sexual encounter in November.

Over three hours, the defence questioned why the woman had continued messaging the accused – at one point more than 700 in a month – to which she repeatedly replied that she had been scared of him, and was trying to keep him on side so he wouldn’t approach her at work or her sporting activities. The woman said the accused told her he had gang connections and had “beat-up” people at local bars.

On 1 December – the day of the Millane date – the accused again pressed the woman for a date. She declined, making excuses. The accused’s last message to her was half an hour before he first met Millane.

Early the next morning, on 2 December, the accused messaged the woman again, chatting about cricket in between Google searches for “rigor mortis”, and “waitakere ranges” – where Millane’s body was eventually found. He tried unsuccessfully for a date again, on 4 December.

Earlier on Monday, the court heard from a second woman who had exchanged messages with the accused since February after meeting on Tinder. She described how she turned down his offers of a date because some of his sexual requests – which included strangulation – made her feel uncomfortable.

The woman, whose identity was suppressed said the accused told her he liked rough sex, domination and strangulation “because it made him feel more superior, and in control”.

The woman gave evidence that on 1 December the accused tried to make a date with her – hours before he met Millane at Sky City – but she declined, because she didn’t want to do some of the things he liked sexually and felt uncomfortable.

Under questioning from defence counsel Ron Mansfield, the woman was pressed on whether the police had specifically asked her about strangulation, or whether she had volunteered the information herself.

The woman insisted she had produced the information unprompted. “I wouldn’t have made up that he asked to strangle me … if it wasn’t real” she said.

A third woman gave evidence on Monday about a consensual sexual encounter that she had with the man that involved choking nine days before he met Millane. The two met through Tinder and had drinks in his CityLife hotel room on 22 November.

“My breath was a bit restricted but it was something that gave me pleasure.” the witness said. “It was a mutual agreement that … restriction and then let go.”

The murder trial is set down for four weeks and is expected to conclude in early December.