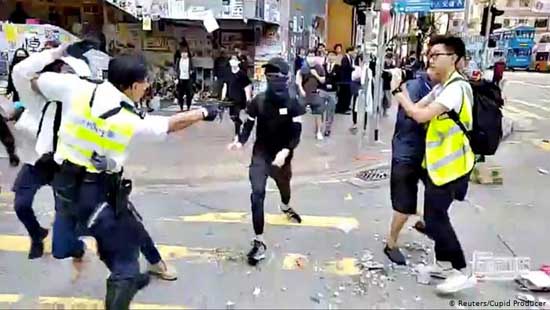 Chaos erupted in Hong Kong when security forces cracked down on an early morning protest. Footage showed a police officer shooting a protester at close range. The man is now in critical condition.

At least one protester was hit by live ammunition on Monday in Hong Kong, after police opened fire and chaos erupted during mass demonstrations.

Local media in Hong Kong reported that the incident had taken place in the eastern side of the island.

Video footage showed a scuffle between black-clad protesters and a police officer, who moments later shot one of the protesters at close range. The protester was then seen lying in a pool of blood with his eyes wide open.

Hong Kong police confirmed the incident in a tweet, also saying that police officers in two other districts “have drawn their service arms from their holsters.”

The man is now in a critical condition. He was taken into hospital and operated upon immediately. Doctors removed the bullet, but he reportedly has organ damage.

Riot police were deployed on Monday ahead of the demonstrations. Services on some train and subway lines were disrupted. Protesters were seen using barricades to block roads across Hong Kong as they targeted rush hour commuters and traffic.

DW’s Mathias Bölinger in Hong Kong said tension was evident across the city. Office workers coming out onto the streets to demonstrate during their lunch breaks were “fired upon with tear gas,” he said.

Pro-democracy activist Joshua Wong said on Twitter that a fierce crackdown had begun early in the day and showed footage of clashes between police and protesters.

“Barely 9 o’clock in the morning, and across the other side of town, in Kwai Fong, a traffic cop gone berserk on a motorcycle is running protesters over,” Wong wrote.

The violence comes just a week after a student died in hospital after falling from a building, when protesters were being dispersed by police.

Hong Kong has been rocked by protests since June, when residents took to the street to reject an extradition treaty with China.

Since then, the movement has snowballed into larger pro-democracy demonstrations that have been repressed by security forces. Protesters have taken a strong stance against police brutality and China’s influence over the territory.