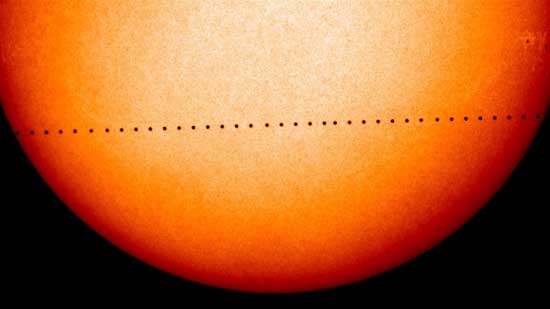 The orbital pattern of Mercury is set to bring it between Earth and the Sun on Monday, with millions of people potentially being able to watch the transit as it unfolds.

Mercury is the smallest planet in our solar system (since poor Pluto was downgraded) and lies closest to the Sun, with its daytime temperatures hitting a beyond-sweltering 800 degrees Fahrenheit (427 degrees Celsius).

What is a planet’s ‘transit’?

On Monday, Mercury will pass between Earth and our star, appearing as a tiny dark spot traveling across the solar surface. In effect, a planetary ‘transit’ happens when any planet passes between an outer planet (meaning one that’s further away from the Sun than it is) and the Sun.

Mercury’s close orbit of the sun brings it around the star more frequently, and its transit relative to Earth is much more common than neighboring Venus. That said, Mercury is expected to only transit some 14 times this century.

Where can it be seen?

The transit is due to start at 12:34 UTC on November 11 and end around 18:05 UTC. Depending on cloud cover, the event can be viewed – even partially – from many countries, particularly in South America, Africa, south and west Europe, south and west Asia, and much of North America.

Obviously, looking directly at the sun is a terrible idea. So, for starters, don’t do that. If you’re lucky enough to find yourself somewhere within the region where the transit should be visible from, then you’ll need to equip yourself with binoculars or a telescope (even a light one should do the trick) but make sure you’ve added an effective sun filter over the lens beforehand.