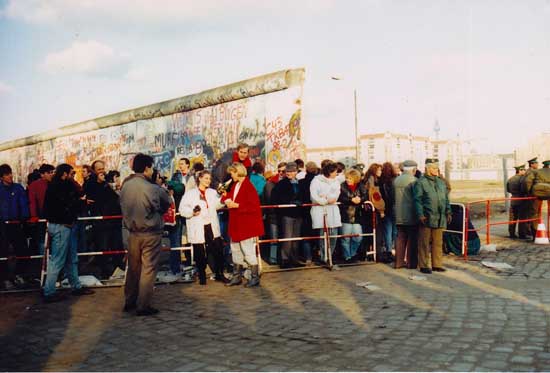 Consortium News Editor-in-Chief Joe Lauria was in Berlin as the wall fell 30 years ago today. These are some of the images that he captured.

November 9 is an eerily significant day in German history, in which five major events occurred.

Reunification was not universally cheered in Western Europe. Italian premiere Giulio Andreotti said, “I love Germany so much that I preferred when there were two.” Soviet leader Mikhail Gorbachev agreed to reunification in exchange for an unwritten promise that NATO would not expand to the East, a broken U.S. promise that scuttled the hope of post-Cold War peace and laid the groundwork for today’s tensions in a Second Cold War.

Consortium News Editor-in-Chief Joe Lauria lived in Germany from 1984 to 1988, the last year in West Berlin.  He returned to Berlin on Nov. 11, 1989, two days after the wall opened, and recorded these images at the breached barrier.