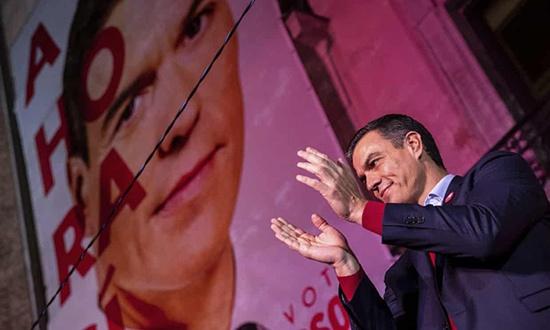 Sam Jones in Madrid –  The Guardian

Spain’s ruling socialist party has won the country’s fourth general election in as many years but once again failed to secure a majority in a vote in which the far-right Vox party vaulted into third place and the centre-right Citizens party suffer a humiliating collapse.

The conservative People’s party (PP) rallied after its dismal showing last time, winning 87 seats, while Vox finished third as its seat count more than doubled from 24 to 52.

The anti-austerity Unidas Podemos came fourth with 35 seats, followed by the pro-independence Catalan Republican Left with 13 seats. Citizens slumped to sixth place as the 57 seats it picked up seven months ago dwindled to just 10.

Frustration and apathy appeared to have affected turnout, with participation dropping from 75.5% in April to 69.9%.

The result suggests Spain is no closer to ending its impasse and is again bound for months of negotiations and horse-trading to try to assemble a government at a time of unprecedented political fragmentation.

Sánchez said he intended to form a progressive government and urged his rivals and opponents not to stand in his way. “I’d like to make a call for the rest of the political parties to act generously and responsibly to unblock the political situation in Spain,” he said on Sunday night. “The PSOE will also act generously and responsibly to unblock it.”

The PP leader, Pablo Casado, said the ball was now firmly in Sánchez’s court. “We’ll see what Pedro Sánchez suggests and then we’ll fulfil our responsibility because Spain can’t carry on being deadlocked,” he said.

Vox’s leader, Santiago Abascal, told jubilant supporters that his anti-immigrant party would not let them down. “We have led a cultural and political change because we have opened up all the forbidden debates and told the left that the story isn’t over yet and that they don’t have any moral superiority” he said.

Pablo Iglesias, the leader of Unidas Podemos, who has offered to help Sánchez back into office, said the repeat election had served “to reinforce the right and to give us one of the most powerful extreme right in Europe”.

Albert Rivera, the Citizens leader once touted as the poster boy of centrist Spanish politics, hinted that he might step down following his party’s pitiful results. “I want to be honest with the Spanish people,” he said. “There’s no excuse and no way to soften the bad result we had today.” He said he would hold a meeting with the party’s executive committee on Monday morning.

Iñigo Errejón, the former Podemos politician who now leads the new party Más País (More Country), said a progressive government was a “moral obligation” as the party won three seats in congress. “We can’t have a third election,” he said. “This repeat election is a warning about what happens when personal interests are put before national interests.”

Sunday’s election was triggered when the PSOE failed to find viable support for a new administration after its victory in April. The socialists were unable to reach an agreement with Unidas Podemos, while Rivera flatly refused to do anything to facilitate Sánchez’s return to office.

The poll results came against a backdrop of renewed tensions between the central government and the separatist regional government of Catalonia, as well as growing concern over the economy.

In the middle of October, Spain’s supreme court jailed nine Catalan separatist leaders for sedition over their roles in the failed push for independence two years ago. The verdict provoked violent unrest in Catalonia and prompted rightwing Spanish parties to call for a tough response from Sánchez, whom they routinely accuse of being too soft on the separatists.

The re-eruption of the Catalan crisis has helped fuel the rise of Vox, which favours a radical recentralisation of Spain.

The Catalan Republican Left hailed their showing on Sunday night as proof that the independence movement had responded to the sentence in “the only way it knows” – at the ballot box. It once again narrowly beat the Catalan socialists into second place in the region. The far-left, pro-independence Catalan CUP party picked up its first two seats in the national parliament.