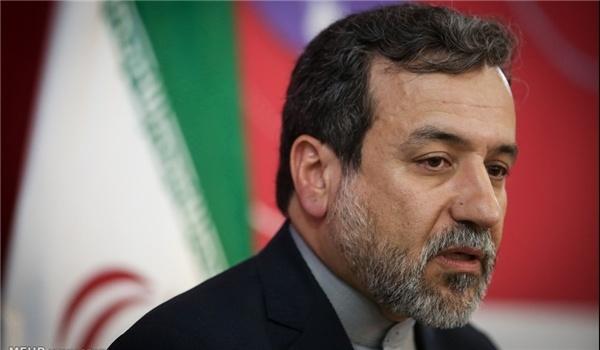 TEHRAN (FNA)- Resumption of anti-Iran sanctions adopted under Chapter VII of the UN Charter would mean that Tehran has been wrong in being fully cooperative with the International Atomic Energy Agency (IAEA), and engaging in diplomacy and negotiations, Deputy Foreign Minister Seyed Abbas Araqchi said, warning that his country will change its nuclear doctrine if UN sanctions are reinstated.

Speaking on Saturday afternoon at the 2019 Moscow Nonproliferation Conference titled Nuclear Energy, Disarmament and Nonproliferation in Moscow where Araqchi detailed Iran’s stances on the nuclear agreement of 2015, officially known as the Joint Comprehensive Plan of Action (JCPOA), as well as some other regional issues, the senior Iranian diplomat said, “When an agreement entails no benefit for you, there will remain no reason to still abide by your commitments.”

“It is natural that soon we will reach the end of the commitment-reducing process, because there will be no commitment left to be reduced,” the senior nuclear negotiator underlined.

“Why should we remain in this agreement if it is like that Iran should always give in and never receive anything in return?” asked Araqchi.

“We are ready to return to full compliance with the JCPOA on the condition that our JCPOA dividends are guaranteed,” he reiterated.

“Many in Iran, including myself, believe that the policy of zero oil [export] is a gift and a golden opportunity to save our economy from dependence on oil [revenues],” highlighted the senior diplomat.

In response to the question what Iran would do if European countries revived the UN Security Council sanctions, the Iranian deputy foreign minister warned that “with regard to [the snapback of the sanctions] and the trigger mechanism I think we have made it absolutely clear to all participants in the JCPOA that snapback and the return of previous resolutions [of the Security Council] is a red line for Iran.”

He further warned that Iran would revise its nuclear doctrine if Iran’s file was under Chapter VII of the UN Charter again.

“If Iran is put under Chapter VII of the UN Charter again despite all the cooperation with the IAEA and negotiations and engagement, it would mean that our ‘nuclear doctrine’ had been wrong and that we have to revise our nuclear policy and doctrine.”

In relation to the “sunset provisions” in the JCPOA, Araqchi said, “The fact is that the JCPOA is based on one principle that is Iran’s commitment to non-production of nuclear weapons, which is permanent and Iran has pledged not to move towards that.”

He said the reason some restrictions were imposed on Iran’s nuclear program for periods of 10, 15, and in some cases 20 and 25 years was “confidence building” and “you cannot expect any country to be building confidence forever.”

Later, the senior Iranian diplomat said that the steps that Iran has taken so far scaling down its JCPOA commitments are in accordance with the provisions of the deal.

He said that the problem as a whole began when the US illegally left the JCPOA, blaming the tensions in the region on Trump’s administration’s actions.

He added that Iran will return to fully abide by its JCPOA commitments if the US lifts all the sanctions that imposed after its withdrawal from the accord on May 8, 2018.

Araqchi also said that the efforts by Russia and China prevented Iran from leaving the deal, saying, “Had it not been for the consolations with Moscow and Beijing, Iran may have withdrawn from the JCPOA a long time ago.”

He added that Iran is still implementing the deal despite being hit by the “US economic terrorism”.

The diplomat also noted that Iran seeks to leave the door open for diplomacy and wants to preserve the deal.

Araqchi further described the US “maximum pressure” campaign against Iran as a failed policy, adding that the US policy is not working and has not achieved its objectives.

“I can tell you that the policy of maximum pressure has only led to maximum resistance in Iran and we will continue to do so because if the maximum policy succeeds, we cannot live in the future anymore and we must always be under pressure. That’s why we’re not going to let this happen.”

He went to scorn Israeli Prime minister Benjamin Netanyahu for his claims on the existence of a secret nuclear archive in a desert in Iran as a fabricated and funny story.

Responding to a question about Iran’s initiative to reduce tensions in the Persian Gulf known as the Hormuz Peace Endeavor (HOPE), he said Tehran believes in collective security and security for all.

In his address to the conference, the Iranian deputy foreign minister first referred to the recent developments in the region, including the ongoing tensions in the Persian Gulf region such as the recent rocket attack on the Iranian tanker Sabiti 60 miles off the coast of Saudi Jeddah port city on October 11.

Araqchi said that investigations are underway on the incident to identify the cause of the missile attack, underlining that “we will respond to it at the right time and place.”

Upon arrival in Moscow on Friday, Araqchi had said that protecting his country’s interests is the overriding priority over preserving nuclear deal, adding that it is a universal belief that Tehran is acting sincerely in scaling down its nuclear commitments.

He made the remarks a day after Iran’s 4th step in reducing nuclear commitments was put into effect at Fordow nuclear site, touching upon the fate of the JCPOA.

“Iran has vividly shown the world, on one side, its determination for fully observing JCPOA commitments, and on the other side, its will to scale back its commitments if other countries fail to deliver on their obligations,” he underlined.

Iran has given diplomacy its fair share and if the situation is not changed, Iran will keep advancing in the path of reducing nuclear commitments, the Iranian diplomat reiterated.

Early on Thursday, Iran resumed injection of UF6 gas into the centrifuge machines installed at Fordow nuclear facility as part of the country’s fourth step to modify nuclear deal undertakings.

The measure at Fordow was taken upon an executive order by President Hassan Rouhani in coordination with the Supreme National Security Council (SNSC).

A cylinder including 2,000 kg of uranium hexafluoride (UF6) was transferred from Natanz to Fordow nuclear site. Then, the cylinder was connected to the feeding lines at Wednesday midnight.

Following the successful technical overhaul, the gas injection to the chains as well as the centrifuges and producing and gathering enriched uranium began at Fordow under the supervision of the International Atomic Energy Agency (IAEA).

After the Thursday move, Iranian Foreign Minister Mohammad Javad Zarif reassured that his country will continue its diplomatic engagement with countries interested in preserving the nuclear deal, underlining that the 4th step of Tehran’s reduction in nuclear commitments was a natural response to the US destructive moves and Europeans’ inaction.

“We have taken the fourth JCPOA step,” Zarif said on Friday night upon arrival in Turkey to attend the 24th meeting of the Council of Foreign Ministers of the Economic Cooperation Organization (ECO).

“We had made it clear that if the measures of other parties do not yield results, we’d take the next steps to decrease our JCPOA commitments,” the top Iranian diplomat said.

“The [Iranian] president announced on the first day of scaling back the JCPOA commitments that we will continue the negotiations despite taking our steps within the framework of the JCPOA,” he said, adding that Tehran started the talks from the very first day and “did not say no to negotiation.”

“We will hold talks with those parties interested in preserving the JCPOA; the French will continue their consultations on the issue, and we will leave the door open for negotiation and understanding,” Zarif noted.

On Thursday, Iran’s Ambassador to the UK Hamid Baeidinejad dismissed the Europeans’ argument of their inability to honor their nuclear deal commitments under US pressures, adding that the terms of the agreement and the ability to deliver on obligations should have been thought of before making a promise.

“We hope this warning would encourage all other parties to implement their commitments. … Now it depends on the other side — if they don’t take this warning seriously … we will be in a very difficult situation,” he warned.

The nuclear deal was reached in Vienna in July 2015 between Iran and the P5+1 group of states, the US, Britain, France, Russia, and China plus Germany. It lifted nuclear-related sanctions against Tehran, which, in turn, voluntarily changed some aspects of its nuclear energy program.

The US, however, left the accord last May and reinstated its unilateral sanctions against Iran. The European deal partners, meanwhile, have bowed to Washington’s pressure, failing to honor their contractual obligations to protect Iran’s economy in the face of America’s “toughest-ever” bans.