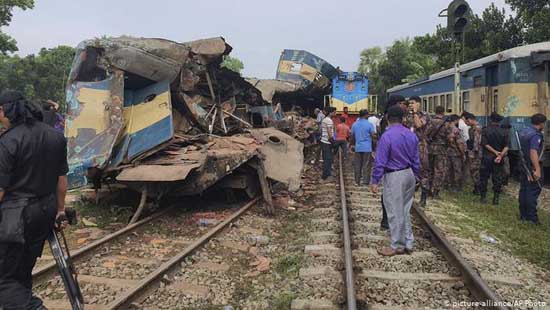 The two trains were heading in opposite directions on the same track when they collided at 3 a.m. local time. Most passengers were asleep when the crash occurred.

Two trains have collided in eastern Bangladesh, leaving at least 15 dead and injuring dozens. Emergency personnel were on the scene to rescue passengers trapped in wreckage.

“More than 40 injured people have been admitted in hospitals,” he said.

“When I came out of the train, I saw dead bodies without heads, without legs, without hands,” Mohammad Moslem, 50, who was among the passengers told Reuters. “We were so close to death, but Allah saved us,” he added.

Prime Minister Sheikh Hasina expressed shock and sorrow at the injuries and loss of lives, urging officials and the public to provide support for the victims.

Both trains on same track

The accident took place at around 3 a.m. local time (9 p.m. UTC) in Brahmanbaria, some 100 kilometers (60 miles) east of the capital, Dhaka, when a train headed for the capital crashed into another bound for the southern city of Chittagong, crumpling three compartments.

Most passengers were asleep when the crash occurred.

It remained unclear what caused the two trains to run on the same track. Authorities have launched a formal investigation.

“One of the trains might have broken the signal, leading to the tragedy,” Shayamal Kanti Das, a police official, told reporters.

Firefighters, police, border guards and army officials were all at the scene to assist with the rescue operation.

Train accidents are a frequent occurrence in Bangladesh. Unsupervised railway crossings, poor signaling and poor track conditions have been some of the causes of previous accidents.