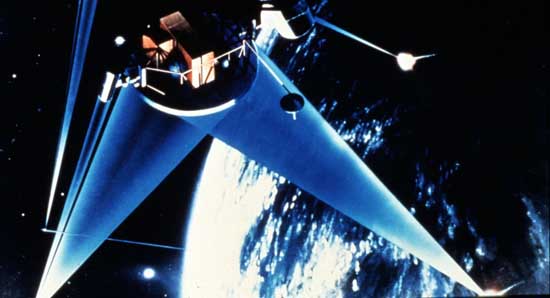 In July, the Russian Defence Ministry lambasted American plans to use space as a theatre of war, condemning Washington for its refusal to engage in the Moscow-Beijing talks on the non-deployment of weapons in space.

The US intelligence community (IC) plans to update its assessment of what it described as the space warfare capabilities of Russia and China, Bloomberg reports.

The news outlet cited Air Force spokeswoman Christina Hoggatt as saying that the National Intelligence Estimate on the matter is “being worked [out] by the IC at this time.”

The updated intelligence estimate will be used by the new US Space Command “alongside current operations and critical information from our international, civil, and commercial partnerships, to identify and drive” future “training and acquisition requirements,” she said.

Bloomberg cited an annual report of the congressionally mandated US-China Economic and Security Review Commission as claiming that China “views space as a critical US military and economic vulnerability and has fielded an array of direct-ascent, cyber, electromagnetic and co-orbital counter-space weapons capable of targeting nearly every class of US space asset.”

The survey went even further by asserting that “it may be difficult for the United States to deter Beijing from using these weapons due to China’s belief the US has a greater vulnerability in space.” The report, the copy of which was earlier obtained by Bloomberg, is due to be released on 14 November.

In September, Chairman of the Joint Chiefs of Staff Gen. Joseph Dunford argued that the US has an array of major adversaries, including Russia, which allegedly challenge US supremacy in space.

“Adversaries to include North Korea, to include Russia, to include China, to include in a developmental way Iran, have all developed capabilities that threaten our space capabilities,” Dunford claimed, adding that US adversaries’ activities in space will “inform” the Pentagon’s future efforts in the creation of space systems with an increased chance of survivability “in a contested area.”

Significantly, the US officials made no direct mention of a space war in their remarks, even though their naming major adversaries certainly speaks volumes.

In a separate development in late August, US President Donald Trump formally established US Space Command, calling it a “big deal” and saying that the new military branch would help “defend America’s vital interests in space,” which he said would be “the next war-fighting domain.”

SPACECOM is not to be confused with Space Force, a separate Trump administration initiative to serve as the sixth branch of the US Armed Forces, which still needs to be approved by Congress.

This was preceded by Major General Andrei Sterlin, head of the Main Operational Directorate of the Russian Armed Forces’ General Staff, berating the US for trying to militarise outer space.

“The Pentagon considers space as a potential theatre of military operations and demands to maintain complete freedom of manoeuvre in this direction. In this regard, the US refuses to hold talks on the basis of the Russian-Chinese draft treaty on the prevention of the placement of weapons in space and the formation of an international legal framework limiting its ability to use space for military purposes,” Sterlin added.

He referred to the year of 2008, when Russia and China put forward for the discussion at the Disarmament Conference the draft Treaty on the Prevention of the Placement of Weapons in Outer Space, the Threat or Use of Force Against Outer Space Objects. The document sought to maintain outer space free of weapons and open for peaceful research by all states without exception.

Russian Ambassador to China Andrey Denisov told reporters late last year that Washington’s aspirations to dominate in military space may potentially pose risks to the security of both Russia and China.

“Indeed, our US partners […] lay claims to some dominant positions, including military space, which, of course, poses certain potential threats to both China, Russia and all countries,” he added.