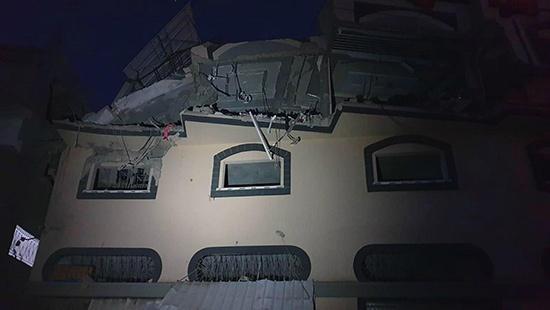 Islamic Jihad also announced that political bureau member Akram al-Ajjouri had survived an Israeli attack on his house in Damascus.

The Israeli army announced at dawn on Tuesday that it had assassinated Bahaa abul-Ata, a senior military leader of Islamic Jihad in Gaza.

In a joint statement, the Israeli army and the General Security Agency (Shin Bet), said it had undertaken an air strike at four o’clock in the morning targeting the building where abul-Ata and his wife were.

The statement said al-Atta was “the top leader of Islamic Jihad” and that the assassination had been approved by Israeli Prime Minister and Minister of Security, Benjamin Netanyahu, a week ago.

In a statement, the Islamic Jihad confirmed the death of abul-Ata, the group’s commander in the northern Gaza Strip, and his wife Asmaa in an Israeli attack on their house in the east of Gaza City.

The Palestinian ministry of health said that the couple’s siblings Salim, Mohammed Layan and Fatima, along with their neighbour Hanan Hellis, were wounded in the same air strike and are in a stable condition.

Islamic Jihad also announced that Akram al-Ajjouri, a member of its political bureau, had survived an Israeli attack on his house in Damascus and that his son and a number of his bodyguards had been killed.

Around an hour after the killings in Gaza, multiple rocket alerts sounded in southern Israel, including in Ashdod, Beit Elazari, Ashkelon, Zikim, Karmia, and as far north as Holon and Rishon Le Zion, in the suburbs of Tel Aviv, signalling retaliation from Islamic Jihad was underway.

Speaking to Middle East Eye, Khalid al-Batch, member of Islamic Jihad’s political bureau, said: “These crimes are the announcement of a new Israeli war on the Palestinian people and the Israeli occupation is blamed for it.”

Regarding the timing of the assassination, Batch said: “The Israeli occupation is moving its internal crises towards the Palestinians and their resistance groups.”

With regard to the attempted assassination of Ajjouri, he said: “The Israeli occupation crossed the borders regarding its aggression against the Palestinians.

“There must be a massive response which matches the crimes.”

Batch said that his movement and its military wing were ready for retaliation and ready to defend the Palestinian people in Gaza and everywhere.

All other Palestinian factions, including Hamas, Fatah, the Popular and Democratic Fronts, condemned the Israeli “aggression” and also blamed the Israeli occupation for any possible escalation.

Hamas spokesman Hazim Qasim told MEE: “The Zionist occupation is blamed for the consequences of this assassination and dangerous escalation.

“Resistance against the Israeli occupation will continue and escalate. The crime of assassinating the leader of the Islamic Jihad will not pass without punishment.”

Qasim said that the joint heads of the military wings of the Palestinian factions would decide how big and how long will the retaliation would be.

He said that Hamas would never take an isolated decision in any of the Palestinian issues, and that any measure must be discussed with the other Palestinian factions and a collective decision be taken by all of them together.

He did not rule out that the killing would lead to a wide scale escalation of violence as Islamic Jihad would definitely retaliate over the assassination of its leaders.

Other factions will not remain silent, especially Hamas, he said, stating that the Israeli army
said that it was ready for a round of clashes lasting a couple of days.

Abu-Amer said that the timing of abu-Amer’s assassination was related to the aftermath of the Israeli elections as Netanyahu would gain several advantages from it.

The Israeli prime minister would also be able to claim the achievement of killing abul-Ata as he had intentionally approved the operation hours before tasking Naftali Bennet to run the defence ministry.