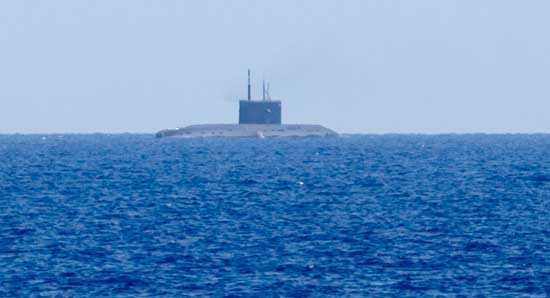 The outlet did not clarify what the Russian vessel was doing in the area, or why the Israel Defence Forces failed to detect its alleged entry into the country’s territorial waters.

According to the news outlet, the incident occurred some three months ago off the coast of the city of Tel Aviv, central Israel. It is not clear how long the sub’s alleged presence in the area remained undetected.

The Israeli military did not clarify to Ynet whether the incident had taken place, or whether it had done any ‘damage to the security of the state’. In a statement, the military said that “From time to time the IDF naval forces discover targets within our territorial borders, which may be perceived as being vessels belonging to foreign military. We do not intend to comment on the details of the article.”

The Russian military has yet to comment on the alleged incident.

The Russian Navy operates a naval flotilla at the Tartus naval facility in Syria, about 335 km north of Tel Aviv, and has sent a number of vessels, including cruise-missile armed submarines, to the Mediterranean coast in the last several years as part of the anti-terrorist mission in Syria which began in 2015.

Russia and Israel signed an agreement in September 2015 to coordinate military action over Syria to avoid an accidental trading of fire.

The two militaries have for the most part managed to avoid direct clashes. However, in an incident in September 2018, Syrian air defences accidentally downed a Russian Il-20 reconnaissance aircraft while firing at attacking Israeli fighters, killing all 15 airmen onboard. The incident prompted Russia to deliver S-300 air defence systems to Syria, and led to a significant temporary cooling in Russian-Israeli relations.