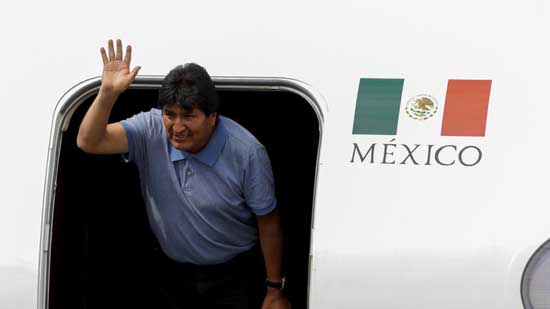 Bolivia’s ousted socialist president, Evo Morales, has credited Mexico with saving his life, after the country offered him political asylum following his resignation from government.

“I am very grateful to the president and the Mexican people, because he saved my life,” Morales said on Tuesday, after he arrived in Mexico City to claim political asylum. Unaccounted for in recent days, Morales decried the “coup” against him, and recounted how a member of his once-loyal military was offered $50,000 to turn him in to the opposition on Sunday.

Morales was re-elected to the presidency in October, in an election result that opposition leaders called fraudulent. Though he offered to hold fresh elections, protests continued and Morales stepped down on Sunday following a police and military mutiny.

Nevertheless, the socialist leader – who presided over Bolivia through a period of relative stability and economic growth – vowed to remain politically active in exile.

“As long as I have life, we continue in politics, the struggle continues, and we are sure that the people have every right to free themselves,” he told reporters in Mexico. Prior to his departure, Morales promised his supporters that he would “return with more strength and energy.”

One of Latin America’s last remaining leftist heads of state, Morales received an offer of asylum from Mexico’s socialist government on Monday. Aside from the Mexicans, Morales’ allies in the region had been whittled down in recent years, with only Venezuelan President Nicolas Maduro, Cuban leader Miguel Diaz-Canel, and Argentinian President-elect Allberto Fernandez sharing his ideology.

Clashes between the left and right have persisted in the Bolivian capital of La Paz, as nobody has yet stepped in to fill the power vacuum left by Morales’ departure.