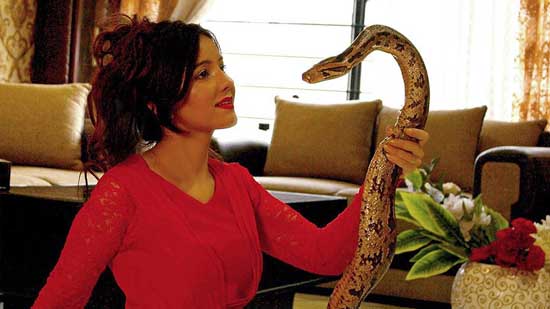 Rabi Pirzada, the Pakistani singer who quit the music industry after nude photos and videos of her were leaked on the internet, has reportedly set off on a spiritual quest as part of a self-professed fresh start in life.

The pop star – who made headlines with her provocative social media posts aimed at Indian Prime Minister Narendra Modi, including a photograph of her wearing a suicide vest and a video featuring large reptiles – is still active on Instagram and Twitter, but her messages are notably more introspective.

“A new beginning #saveasoul,” she wrote in a tweet, attaching several photos of a painting she made of the Kaaba, the holiest site in Islam.

According to Pakistani news network Samaa, Pirzada is currently in the city of Makkah as part of a Muslim pilgrimage, or ‘Umrah.’

Supporters on social media praised her message (and painting skills) and wished her well on her religious journey.

Pirzada’s life was turned upside in early November, after explicit images of her spread across the internet. She has asked the Pakistani government to scrub the photos and videos from cyberspace, but it’s not yet clear if her request will be granted.

It seems that the experience led to a religious awakening for the young star. In a tweet announcing her exit from showbiz, Pirzada wrote: “May Allah forgive my sins. And soften the hearts of people in my favor.”